Posted on September 27th, 2019 by Ralph Grizzle in Deck Plans

You’ve probably heard of the company founded by Torstein Hagen in 1997, which earned a Guinness World Record for christening the most ships ever in a single day, a whopping 16. In fact, Viking has more river cruise vessels operating in Europe than any other company, with more than 50 in the fleet.

Established in 1997, Viking River Cruises acquired KD River Cruises in 2000. The California-based company now operates a remarkable fleet of more than 60 river cruise vessels throughout Europe, Russia & the Ukraine, China and Southeast Asia, and Africa. And, that doesn’t include Viking’s award-winning ocean-going vessels, which debuted in the spring of 2015 with the launch of Viking Star. Viking’s current growth is also happening outside of Europe, with a new ship design in Egypt, the all-suite Viking Ra, which offers Nile River cruisetours. But let’s get back to Europe.

I could dedicate this entire book to explaining the nuances of ship designs and the fleet’s evolution to what it’s become today, but what you need to know is that the fleet basically breaks down into categories based on size and the regions they frequent. 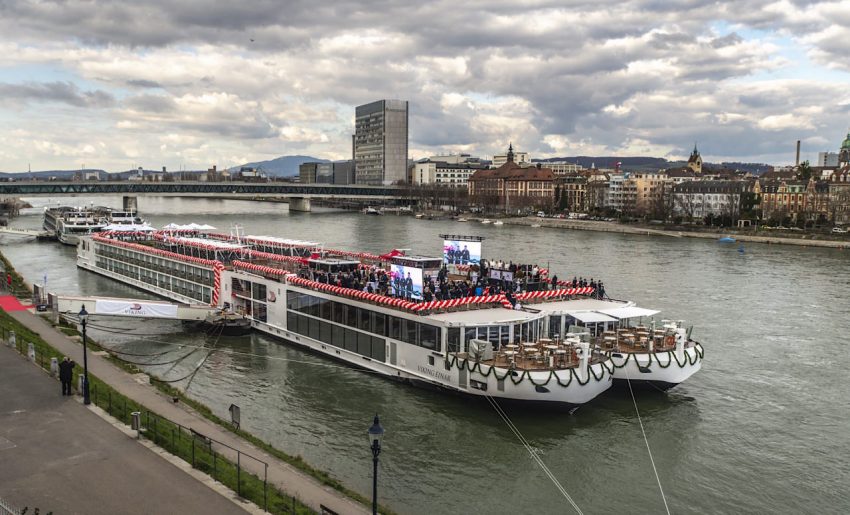 The majority of Viking’s vessels sailing European rivers are Longships, more than 40, which feature full verandas and boast some of the largest suites on the rivers of Europe. This series of ships was launched in 2012 and quickly became a crowd pleaser. If you’re lucky enough to score one of the two Explorer Suites, you’ll bask in 445 square-feet of living space. The other 93 staterooms range in size from 150 square feet to 275 square feet. Guest capacity is 190 guests.

The expansive sun deck features an herb garden and walking track. I particularly enjoy the Aquavit Terrace—a sun-filled relaxation area and a second dining alternative to the main restaurant on the middle deck near reception. Even though there are seemingly countless Viking ships cruising Europe’s rivers, once you’ve sailed on one of these Longships you’ll immediately have your bearings on future sailings aboard sister ships.

The 189-passenger Prestige Ships, Viking Legend and Viking Prestige, were built in 2009 and 2011 respectively, and though they were constructed before the Longships series was released in 2012 they still feature some innovative “green features,” such as a unique hybrid propulsion system that uses less fuel, produces minimal vibrations and offers passengers a smoother river cruise experience.

Five Viking Russia Ships recall the company’s start in river cruising more than 20 years ago. Viking is one of the few cruise lines that actually operates purpose-built river cruisers on the Volga.
The Viking Elbe Ships, Viking Astrild and Viking Beyla host just 98 passengers and have customized hulls and engines built specifically to navigate the historic Elbe river – though that doesn’t necessarily guarantee transit during low water.

Viking’s Douro Ships, Viking Helgrim, Viking Osfrid, Viking Torgil, and Viking Hemming were custom built to sail Portugal’s Douro River and are the only ships in Viking’s fleet that have pools. Lastly, the Ukraine-based Viking Sineus offers 11-day itineraries between Kiev and Odessa. While the 196-passenger ship was originally constructed in 1979 it was significantly updated in 2014.

All of the Viking itineraries range from 8 to 32 days and Viking has an eager-to-please and-seemingly happy-to-be-there staff. As an active traveler, when I sail with Viking I miss the onboard fitness center and bikes, but the company serves up a satisfying traditional river cruise experience with an impressive geographic reach and eager-to-please staff.

Viking’s Longships are some of the most beautiful ships afloat. You’d be hard-pressed, in fact, to find river cruise vessels more appealing to the senses than those in Viking’s expansive fleet. The beauty is by and large a product of Viking’s Scandinavian heritage and the design aesthetic of the Nordics.

But Viking is not all about beauty. Typically, you will get a great value on Viking. The company nearly always has special offers, including 2-for-1 fares, included or reduced airfare, and often, a combination of both. The value proposition also extends to what the company refers to as “affordable luxury.” To give you just one example of what Viking means by “affordable luxury,” the bathroom floors in your stateroom are heated. I’ve not seen this on any other ship, oceans or rivers. There are little touches like the heated bathroom floors all throughout Viking’s Longships.

My video shows you all of the fine touches that make for “affordable luxury” on Viking’s Longships. Video: Viking River Cruises ‘Affordable Luxury’

Also see: What I Learned About Viking River Cruises While Cruising The Rhine

Voyage Report – Nieuw Statendam, St. Thomas
After waking up and looking out onto where we were docked, an obvious staple in any cruiser’s day, Natalie and I ventured to Club Orange for breakfast. Club Orange is a dining venue specifically for Club Orange members. It features the same menu as the main dining room with a couple of extra options –…
AmaWaterways Christens AmaMora
AmaWaterways celebrated the christening of its new 156-passenger vessel, AmaMora. Co-Founders Rudi Schreiner and Kristin Karst joined Mayor Adalbert Dornbusch of Lahnstein, Germany and Godmother Libbie Rice, president of Ensemble Travel Group, for a day of festivities officially commemorating the company’s third new ship launched during the 2019 season. AmaMora will sail the enchanting Rhine…