Posted on September 17th, 2019 by Joseph DeLoach in Outposts

The Mississippi River is an American treasure. It has been a central figure of trade, exploration, literature, and music in the United States. In fact, Mark Twain once wrote, “The Mississippi River towns are comely, clean, well built, and pleasing to the eye, and cheering to the spirit. The Mississippi Valley is as reposeful as a dreamland, nothing worldly about it…nothing to hang a fret or a worry upon.” Thanks to American Cruise Lines, you’re going to learn all about why cruising the Mighty Mississippi should be on every traveler’s bucket list. 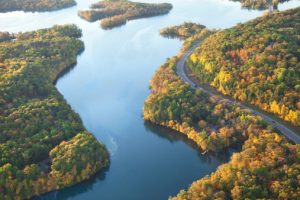 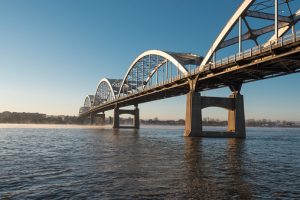 The Mississippi River was essential to life in the 19th century. Before railroad tracks were so widely built, it was an efficient way to get people and good to other parts of the country. One of the greatest inventions of the 19th century was the steam-powered paddle boat. This was a way to travel upstream of the Mississippi River without the extreme effort of man-powered paddling. It also cut the time of transport dramatically. The first paddle steamer on the Mississippi was the New Orleans, launched in 1811. Many more paddle steamers came after, used for commerce and transport along the river into the early 20th century. Though modern paddle boats are diesel powered and largely used for tourist cruises, they maintain the same architecture. Balconies ring the top floors for observing the beautiful countryside and bridges as you pass them. They also still have the classic white paint and turning wheel with paddles that move the boat along the muddy water.

The evolution of music in America was facilitated by the movement of people from South to North, and vice versa. Jazz and blues musicians, and fans, took their knowledge of the different styles from New Orleans to Chicago, and back again. There was also a particular style of blues, the Delta Blues, that originated in the Mississippi Delta area. It has a sound that fits the slow nature of the deep South, and the meandering river that was so essential to life. 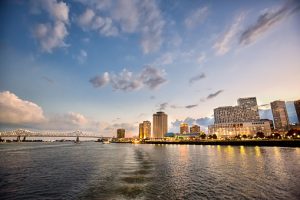 Along the Mississippi there are cities and sights worth seeing. Of course, no river cruise is complete without a visit to New Orleans. This city is the most unique city in the United States. Not only for its amazing jazz concerts flooding the streets with lively sounds, but their attitude of “laissez les bon temps rouler” meaning, “let the good times roll.” Memphis, Tennesse is said to have some of the best barbecue around, though Kansas City would beg to differ. It also has Graceland, home of “the King” Elvis Presley. Make sure to check out Beale Street as well. where you’ll find good times aplenty. Cruising by St. Louis, you’ll witness the Gateway Arch. This is a 630 ft. tall monument to the westward expansion of early America, and can be seen for up to 30 miles in every direction.

A truly essential part of American history, the Mississippi River winds its way by many attractions. To paddle in the same routes as great thinkers spreading cultural ideas, and ancestors looking for new lands to settle, can be exhilarating. This is why American Cruise Lines offers packages for different days and sections of the Mighty Mississippi, and they look forward to showing you the slow and meaningful parts of American life.

Share your thoughts on “The Mississippi River with American Cruise Lines”