Posted on October 22nd, 2019 by Joseph DeLoach in Outposts

On the stunning coasts of eastern South Africa sits Durban. The third most populous city in South Africa, after Johannesburg and Cape Town, its beaches seem endless. A place where Zulus make up the bulk of the population and the largest number of Indians live outside of India itself. All of this gives it a unique feel compared to the rest of South Africa. Embracing both its roots and the future, Durban is a worthwhile alternative to the more famous of South Africa’s cities. 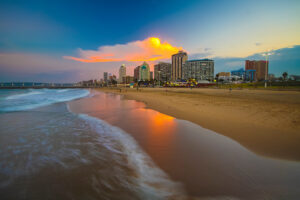 Beaches, beaches, and more beaches. As the Durban coast is along the warmest ocean in the world, the Indian Ocean, the beaches are topnotch for swimming and other water sports. The Golden Mile is a great example of this, as this stretch of beachfront contains the most popular spots for locals and travelers – including a promenade to stroll away the day. Some of the more popular beaches are: North Beach, known for safe swimming and an esplanade to explore; Addington Beach, a slower paced beach for families; Umhlanga Rocks Beach, close to the more upscale condominiums and hotels; and, the Bay of Plenty, a world-famous surf spot that hosts global competitions.

As most other cities in Africa, Durban is close to nature in many ways. Tongaat, just north of Durban, has Crocodile Creek. Crocodile Creek is a home to over 7000 Nile Crocodiles, Alligators, Caiman, and snakes. Waterfalls, trails, and treetop walkways add to the view of reptiles and create a fantastic daytrip. The amount of KwaZulu Natal National Parks are many, and can be reached easily from the city. Imfolozi has been a reserve since 1895 and covers almost 24,000 acres. This reserve features the protected White Rhino – as well as zebra, giraffe, elephant, buffalo, hyena, cheetah, leopard, the Black Rhino. The amazing trails at this reserve give the traveler a feel of truly being in the bush of Africa and its ancient feel. 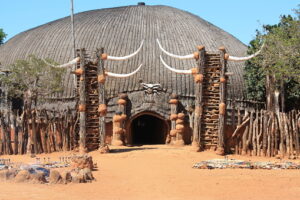 As stated earlier, Durban has the highest number of Indians outside of India which means the curried cuisine is topnotch. This also gives the streets an interesting mix of Asian and African marketplaces and restaurants for the traveler to visit. Another great cultural location to visit is Zululand to the north, a province where Zulu is the primary language spoken. The Zululand region is where most of the reserves are located and is politically ruled by the Zulu Nation.

Durban may not be as popular as Cape Town or Johannesburg, but it is truly a sight to behold. From the cultural diversity of Zulu and Indian coexisting to the reserves full of majestic beasts, Durban’s miles and miles of beaches add to an already fantastic getaway from the humdrum of life. That’s why South African Airways wants the agent to know about their flights to Durban, and more South African destinations, where the traveler is carried to the Motherland for a lesson in the ancient ways of beauty.