How Are Ocean Cruises Different From River Cruises? | TravelResearchOnline

How Are Ocean Cruises Different From River Cruises?

Posted on February 28th, 2020 by Britton Frost in Deck Plans

Size Of The Ships 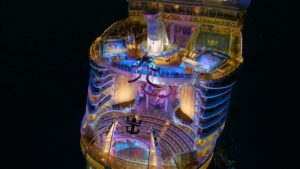 The most obvious difference between river and ocean cruises is the size of the vessels. Ocean vessels can carry thousands of people, while most river vessels carry no more than 200 guests. There are smaller ocean-going vessels, of course. UnCruise Adventures’ fleet is made up of nine ships that all carry less than 100 passengers – with one ship only carrying 22 guests. But when looking at traditional ocean cruise experiences, river vessels have much smaller guest capacities. 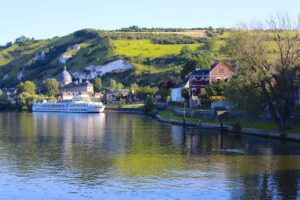 Because river vessels are smaller than ocean vessels, staterooms may be smaller, but that isn’t always the case. Oftentimes the staterooms on river ships may be about the same size as the smallest rooms on ocean vessels – around 170 square feet. While you may not have 1,000 square foot suites as you do on ocean ships, river cruise ships, like Crystal River Cruises’ fleet and AmaWaterways’ AmaMagna, can boast suites that are over 700 square feet.

When talking about the size of ships, it is also crucial to talk about how the smaller size of river vessels can limit your options onboard. Some river cruise ships may only feature one to two dining venues, while larger ocean vessels may boast over a dozen. There are river cruise ships with more dining options. If we look again at Crystal River Cruises’ fleet and AmaMagna, both have four restaurants available for guests to choose from – and Scenic claims to have five. 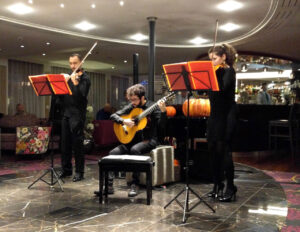 Most river cruise ships will have nightly entertainment. River cruise companies may bring local entertainers on board for dance performances or concerts, but there will likely only be one entertainment option for the night. On a large ocean ship, you may have the option to see multiple shows in one night – from comedy shows to musical performances. Entertainment isn’t limited to shows on large cruise ships either, guests can enjoy discos, white parties, karaoke, trivia, and more throughout the day. 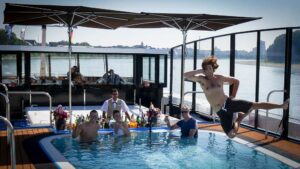 The pools on riverboats may be small, but there is still plenty of room to make a splash. © Ralph Grizzle

Other amenities that you may find on ocean vessels include spas, gyms, pools, casinos, lounges, and bars. On river ships, you’ll typically have one lounge that houses a bar. This serves as the social hub of the ship in most cases. There is also seating on the sun deck of river cruise ships, allowing guests to take in the fresh air as they sail. Cruise ships may house multiple pools, while a river ship may have only have one – if that. While river ships don’t have full-blown spas like many ocean ships, there are often hair and nail salons, and massage rooms on board. Not all river cruise ships have a fitness center, but many do.

Inclusions often go unnoticed when people are considering switching from ocean cruising to river cruising, or the opposite. Those who have river cruised that are looking to ocean cruise may be surprised at the lack of inclusions that come with their cruise fares. Conversely, those who are looking to river cruise for the first time might be shocked at how little they owe when their statements come to their cabins at the end of their voyages. 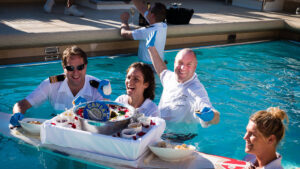 One of Seabourn’s inclusions? Caviar. Any time, any place. © 2015 Avid Travel Media Inc.

Because there is such variety in ocean cruise companies and what is included, it is impossible to say that river cruise companies include more in their cruise fares than ocean cruise lines. What I can say though is that in most cases, they do. Sure, those looking to cruise with luxury cruise lines can expect beverages and gratuities to be included in the cruise fare. Some cruise lines may even include an excursion in each port, but that is rare.

On a river cruise, you can generally expect beer and wine to be included during lunch and dinner. You can also expect almost every river cruise company to include a free excursion in every port. Most companies even give you a choice of free excursions, from gentle walking tours to hikes and bike rides. And also important to mention, internet will be included. Internet can be very pricey on ocean cruises. 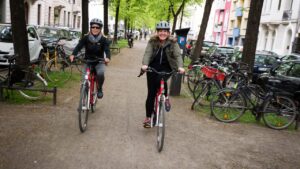 There are some river cruise companies that do not include excursions or drinks in their cruise fare. This is almost always reflected in lower fares. So those who wish to venture out on their own, or those who don’t wish to drink during meals, are not paying for what they are not using. On the contrary, there are cruise lines that include more such as unlimited beverages, gratuities, and port charges. These cruise fares are higher, but may be worth it depending on what you, as a guest, value.

So, What Does This All Mean?

Will you venture into unknown waters 2020?

Planning Two Perfect Days In Prague
Part of the appeal of river cruising is the ability to see so many destinations in one trip. Many people choose to add pre- and post-cruise extensions to their trips, or maybe even both. On my last trip with AmaWaterways guests could opt for a pre-cruise extension in Prague before departing for the cruise in…

Share your thoughts on “How Are Ocean Cruises Different From River Cruises?”