Postcards from Around The World: Antarctica | TravelResearchOnline

Postcards from Around The World: Antarctica

Posted on February 14th, 2020 by Britton Frost in Deck Plans

After our awesome call in Buenos Aires and a stop in Montevideo, Uruguay, it was time for us to go “with the floe” in Antarctica. This was our third visit to the White Continent. The first one in 2000, we went on an expedition ship that allowed for six landings in Antarctica, six in sub-Antarctic islands and one in Cape Horn. Our next visit on Holland America’s Amsterdam was during her 2012 World Cruise, and this third one is again aboard the Amsterdam on her current World Cruise – our last two visits allowed us to enjoy Antarctica’s icy panoramas from the ship. 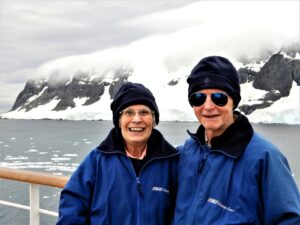 We dug out our jackets and sweaters and prepared to use the Grand World Voyage pillow gifts we received on our way to the sub-Antarctic islands of the Falklands/Islas Malvinas: a warm fleece set consisting of hat, scarf and gloves, and the Antarctica Cruising Guide by Peter Carey and Craig Franklin. We also received a map of Antarctica and leaflets with guidelines for visitors with hints including carefully guarding possessions in outer decks where a gust of wind can send them flying into the sea, conserving water (a tongue-in-cheek suggestion was made that we shower together), and what to do if disoriented seabirds land on the ship (handle them as little as possible to avoid stress and contact the Bird Officer on board who will keep them in a warm, dry room until ready to release and do so when the ship deck lights are off or at first light in the morning).

Holland America put on an Expedition Team including Dr. Peter Carey, one of the authors of the Antarctica guide we were given as well as a zoologist and Director of Explorations for the line; Jason Kelley, a geologist; and Gabriela Roldan, who talked about historical and cultural aspects in the White Continent.

Our planned stop at Stanley in the Falklands Islands/Islas Malvinas had to be scrapped due to high winds and swells that were making the floating tender pier take water and forced the local Harbor Master to cancel the call as tendering was deemed unsafe. It is a common problem here, but always a shame when it happens as the Falklands are home to colonies of King, Gentoo, Magellan and other penguins and birds and are frequented by dolphins and whales. And for history buffs, in and around Stanley there are memorials to the 1982 war between the U.K. and Argentina over possession of the islands. We had already made landings at Volunteer Point, home of a colony of King penguins, and at Stanley during our Antarctica expedition in 2000, but others who had never been were particularly disappointed.

“Weather is in charge here,” Carey said during one of his talks ahead of our arrival in the Antarctic, adding that in Antarctica it is a good idea to “embrace vagueness” as ice and sea conditions would dictate where we go in the White Continent. We were tickled pink just to be here, no matter where conditions took us.

While we crossed the Drake Passage – an uneventful crossing with reasonable seas – we were treated to enrichment lectures on the seabirds of the Southern Ocean including petrels, albatrosses, skuas and penguins, and there were lectures on the geology of Antarctica, whales, glacial ice and sea ice among other topics.

“The land looks like a fairytale,” explorer Roald Amundsen said about Antarctica. Capt. Jonathan Mercer, the master of the Amsterdam, steered a course to King George Island, 75 miles from the Antarctic Peninsula, making landfall in the early morning of Jan. 30. It was drizzling and 34 degrees. We then began our four-day “Antarctica Experience” taking us via the Bransfield Strait to scenic Admiralty Bay. Humpback whales were sighted in the distance as well as a few Gentoo penguins torpedoing in and out of the water. In Admiralty Bay, the weather cleared and we saw what Amundsen had been talking about, with lovely snow-covered mountains and glaciers and the first ice of the voyage – “growlers” or small icebergs with pretty blue ice. On King George Island we also saw Brazil’s scientific station in an impressive mountain setting.

Legendary explorer Ernest Shackleton, who got stranded on nearby Elephant Island, and other explorers would have been amazed, I thought, at the level of comfort we were experiencing in these remote latitudes. On deck, coffee, juice and pastries were available in the morning, along with New England clam chowder and other soups served in mid-mornings and afternoons to fortify us while we took in the panoramas. Special dinners were served in the dining room to celebrate our being in the White Continent: an Antarctica Adventure Dinner saluted the great explorers of the 19th and 20th century with dishes like Amundsen Cod, served with mushy peas, fingerling potatoes, bacon bits and root vegetables, and Erebus Sliced Ham (named for 12,448-foot-tall volcano Mt. Erebus and memorializing a meal of fresh ham served by Shackleton in his hut on March 11, 1908). And a Winter Wonderland Dinner was a festive affair with the dining room decorated with hanging snowflake ornaments, snowball centerpieces and blue lighting. 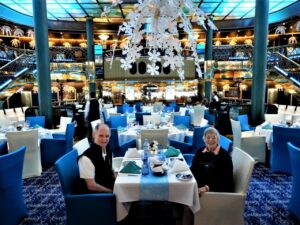 One afternoon, with temperatures rising to 39 degrees, we arrived at Deception Island (typically mornings were 32-34 degrees and afternoons around 39 degrees throughout our days in Antarctica – with some days exhibiting the expected windy conditions as Antarctica is the windiest continent and a couple of days bringing us rain and light snow flurries). Volcanic Deception Island has a large colony of chinstrap penguins and serves as home to fur seals. The wildlife here was mostly visible with the aid of good binoculars.

When it came to wildlife, there were also sightings of humpback and Minke whales, fur seals, leopard seals and penguins, but again, often far off. Would-be travelers to Antarctica interested in up-close viewing of wildlife are best served on expedition voyages on small vessels with zodiacs or bigger ships that are equipped with zodiacs. Those interested in enjoying the natural wonderland panoramas of Antarctica in comfort while crossing the often-tumultuous Drake passage and having many facilities and amenities including nightly musical and cabaret shows and entertainment may opt for a ship like the Amsterdam.

From the comfort of the Amsterdam’s forward Crow’s Nest observation lounge, Promenade Deck, magrodome-covered Lido pool area, the aft Seaview pool, and other outer deck areas we admired the awe-inspiring Neumayer Channel, a fjord that is a symphony of snowy peaks and glaciers. Other highlights included Paradise Harbor, where a humpback whale was spotted and where we passed close to the Chilean scientific station, decorated with a big flag of the country on the side of one of the buildings, and with a colony of Gentoo penguins, close enough to photograph with a good zoom lens.

Very impressive, too, were ice floes (icebergs) that we saw in Paradise Harbor, the Errera Channel, near the Antarctic Sound and other locales, some wind-eroded and sporting shapes like sailboats and castles. Some of these floes had blue and green ice and fanciful shapes – some looked like houses and apartment buildings (and were as large as them) with snow on some of their “roofs.”

Due to precautions against Coronavirus, scientists from the U.S.’s Palmer station in Antarctica were not able to board the Amsterdam for a presentation and Q&A session (the base will not be accepting visitors from expedition ships or sending scientists to any ships for the rest of the season, Capt. Mercer informed us). Also, ice blocking the entrance to Lemaire Channel prevented us from going in there, and poor visibility precluded us from sailing to Hope Bay. “The weather is not being kind to us,” Capt. Mercer said in making the announcement. But we did scenic cruising in the Errera Channel and Charlotte Bay and saw some icebergs bigger than the Amsterdam. And as we made our way towards the Drake Passage the ship passed between a massive, amazing tabular iceberg and another castle-like berg, both beautifully lit by the gentle light of the evening sun – sunset during our four days in Antarctica was typically around or after 10 p.m.

Some Antarctica Fast Facts as we leave the White Continent and set a course to Ushuaia, Argentina, and on to the Chilean Fjords:

Share your thoughts on “Postcards from Around The World: Antarctica”