A bit of courage | TravelResearchOnline

A bit of courage

Posted on April 12th, 2020 by Richard Earls in Publishers Corner

“Courage is not the absence of fear, but rather the assessment that something else is more important than fear.” ~ Franklin D. Roosevelt

The last few weeks have been difficult. The travel industry like all others will suffer greatly from the long  standstill as it stretches into the summer months as it is almost certain to do.  With far too much time on our hands right now, it can be tough to keep our spirits afloat, surrounded by so much threat and difficult news, isolated in our homes.

I collect heroes.  In times like ours, I turn to them for a bit of courage. 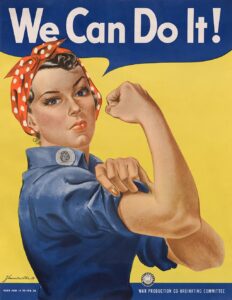 When I need additional inspiration, I often think of generations past. I think of the bombing of London during World War II where the population found the courage to endure nights spent in subway tunnels with little to eat and bombs dropping from the air. I think of the courage on display in the Rosie the Riviter poster. I’m inspired by women like Irena Sendler, the Polish Resistance fighter who saved more than 2,500 children from the Nazis. She was caught and tortured, her legs broken,  but survived by escaping on the day of her scheduled execution. I think of the police and firemen who rushed into the World Trade Center and sacrificed themselves to save others.

Right now we have a lot of heroes to admire. The doctors and nurses, the techs and cleaning staff in hospitals, nursing homes and assisted living facilities. Suddenly we realize the people who are preparing food and stocking grocery store shelves are essential. Sometimes heroism is just doing your job under the most difficult of circumstances.

Most of us never have to publicly display our courage. We typically have the great good fortune of placid times, of business as usual. Then, an event like the Covid-19 pandemic puts us to the test. On the other side of all this is a new opportunity to rise again to the challenges of democracy and to re-build our economy. It is going to require a great deal of courage, determination and a lot of backbone in the face of some serious obstacles. But re-build we can and will do, as long as we keep our courage and our wits in good order.

Stay strong, friends. We all have many fine examples of courage to emulate. You yourself are the product of some 50,000 years of human development and 4 billion years of planetary history. You and your ancestors are survivors. What we are experiencing now is just one more stumble in that same long process, but we have stumbled before and moved forward. We will do it again.