Why the EU Has Restricted US Citizen Travel to Europe | TravelResearchOnline

Why the EU Has Restricted US Citizen Travel to Europe

Posted on July 22nd, 2020 by Steven Frankel in Point-to-Point

Our contributor, Steve Frankel, is one of the first travel advisors to complete a five-course certificate program in Epidemiology taught by the Bloomberg School of Public Health at Johns Hopkins University.

According to CNN, which developed this graphic, April Fool’s Day had a special meaning this year: It was about the date that European Union redoubled its efforts to control the Covid-19 pandemic, and the United States shifted its focus to “rebuilding the American economy and restoring our quality of life.” 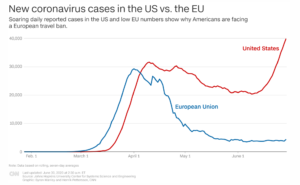 In a way, the situation is eerily similar to Aesop’s Fable, The Ants and the Grasshopper:

One bright day in late autumn as a family of Ants were bustling about in the warm sunshine, drying out the grain that they had stored up during the summer, when a starving Grasshopper, his fiddle under this arm, came up and humbly begged for a bite to eat.

“What!” cried the Ants in surprise, “Haven’t you stored anything away for the winter? What in the world were you doing all last summer?” “I didn’t have time to store up any food,” whined the Grasshopper. I was so busy making music that before I knew it the summer was gone.” The ants shrugged their shoulders in disgust.

“Making music, were you?” they cried. “Very well; now dance.” And they turned their backs on the Grasshopper and went on with their work.”

About April 1, the members of the European Union and most of Asia instituted lockdowns that Americans never considered. In Italy, you had to receive permissions to walk your dog and you were only permitted to go food shopping a few times a week. In Korea and Hong Kong, an order to quarantine in place – because you had been in contact with someone who was infected or you had been traveling abroad – was accompanied by a wrist or ankle bracelet and $2,000-$10,000 fine if you left your home or hotel without permission.

Meanwhile, many Americans were exercising their freedoms by not wearing masks, visiting beaches and hiking trails, staging political rallies, demonstrating in the streets, visiting friends, eating in restaurants, and – basically — trying to live life as it used to be. As the graph shows, we paid for these decisions with over a 100,000 lives.

Now look at the map below that’s produced six days a week by Our World in Data. While the European Union and much of Asia has reduced its positivity rates to less than 2%, the United States – along with most of Latin America, India and the Middle East – doubled or tripled its positivity rates, which is the rate at which people become infected. Whereas the United States is within the gold 3%-10% band for the entire nation, some states and urban areas are in the red and magenta bands (10%-50%). 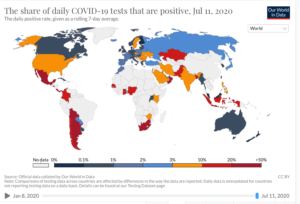 When the EU says we’re not welcome, they aren’t being vindictive. It’s because until we can reduce our positivity rate to less than 2%, we’re a grave danger to everyone we meet. Much of the EU, plus Canada, Australia, New Zealand, Myanmar and Uruguay have positivity rates below one percent, which means that people in these nations can essentially live life as they used to as long as they take some essential, common sense precautions.

Our only way to get down below the 2% level is by using a combination of extensive testing, mandatory contact tracing, social distancing, and closures. Then when we reach 1%, we can consider opening bars, restaurants, health clubs, and schools. The only way to shortcut this process is to engage in universal testing for groups such as those seeking to travel, fly, or attend school.

Many Caribbean, and some European nations, are slated to accept visitors from the United States if they self-quarantine for 14 days and test negative within three days before arriving, and possibly within 7 days after arriving, as well. Generally, they are not permitted to travel before they test Negative, but they may opt to stay in a comfortable resort which has set aside part of their property for quarantined guests. Also, they may also be required to buy pandemic insurance that covers the costs of quarantines, hospitalization, and medical evacuation – if things go wrong.

Barbados is slightly different. Arriving passengers must produce a negative PCR test 72 hours before their departure. Those with a negative test can do 7 days of quarantine, followed by a new PCR test after 7 days since Barbados what to protect their citizens against people who become infected in planes and airports. Also, Barbados will soon announce a new Barbados Welcome Stamp that’s a visa permitting for foreign visitors to work remotely from Barbados for up to 12-months.

Prime Minister Mia Amor Mottley said in a recent speech that the visa would “allow people from the United States, Europe, and Latin America to come and do their jobs digitally for a couple of months and then go back home, if they feel they can work better in a more relaxed atmosphere such as next to a beach.” This may preview a strategy that some EU nations may also adopt: Test before and after travel and be permitted to work and play for up to a year. If you’re one of the thousands of Facebook and Twitter staff who have just been told that for the foreseeable future they can work from anywhere in the world, or if you have a web-based business, spending up to a year in Barbados (and maybe Europe) may sound pretty good. At the same time, by limiting this to workers who work remotely, the policy does not pose a threat to native Bajans who need work themselves.

Steven Frankel, Ed. D owns Cruises & Cameras, LLC (www.Cruises&Cameras.com), that’s associated with Luxe Travel Management and the Signature Travel Network. Steve specializes in helping clients plan small ship cruises, Covid-19 mitigation strategies, and writing books and articles on the cruise industry. He and his wife have enjoyed 40 cruises on most of the ships owned by Seabourn, Crystal, Silversea, Regent, Oceania, and Windstar.  His newest book is How to Plan Your Next & BEST Cruise (Amazon, 2019) and he is a frequent contributor to TRO (www.TravelResearchOnline.com). His email address is steve@cruisesandcameras.com.