Posted on September 16th, 2020 by Steven Frankel in Point-to-Point

Until late 2020, it’s unlikely that U.S. passport holders may be permitted to travel on “real” cruise ships. The ships are banned from U.S. ports and U.S. passport holders are not permitted to sail from European, Australian, or the ports of most other nations. On the few ships that attempted to sail from European ports (without Americans onboard) over the summer, nearly all of the cruises terminated early when COVID-19 appeared among passengers or crew. This was despite everyone being tested within a few days of boarding the ship.

The latest incident occurred a few days ago on the Silversea Silver Spirit, owned by Royal Caribbean, that was chartered to take Saudi-only guests on 3-4 day cruises in the Red Sea. The ship had to return to port on the first day of the first cruise, because a female disk jockey had become infected after being with her family before she sailed – after she, along with the rest of the crew, had tested Negative.

If you’re not wedded entirely to cruising, 2020 may be the time to consider chartering a sailing yacht from a top-rated charter operation such as The Moorings or Sunsail. They have charter bases throughout the world. With 4-10 persons onboard a yacht, you will be safer than you’ll be on a cruise ship with 300-9000 other people onboard. Also, you may even have more fun! 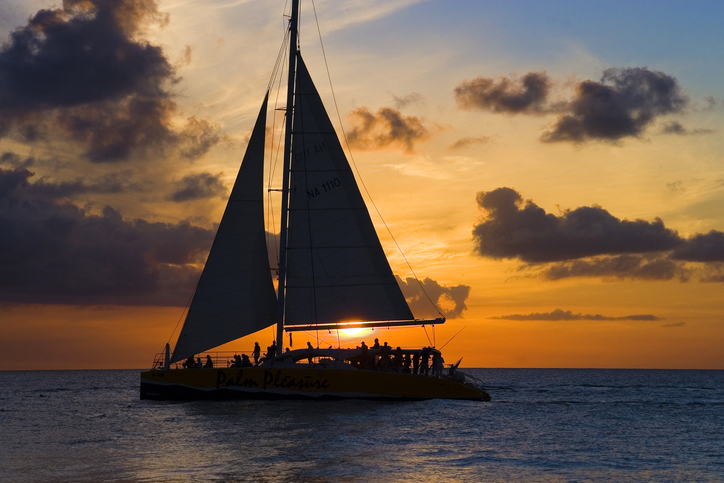 A one-week charter out of Piraeus (the port of Athens), will cost about $5,000 for a 45-foot catamaran with a captain, for 6 guests. The only significant extras will be airfares, food, drinks, and a generous tip. All the rest is included. The total cost for all six guests will be about $6000 ($1000 each) plus airfare.

This means the cost to charter a beautiful $500,000 catamaran, with a captain, in Greece will be only about a third of the cost of sailing from the same port on a deluxe cruise ship.

The yachts are typically bought new by a private owner, who then leases them to the charter company for five years. The lease payments to the owner, and the accompanying tax deductions, typically leave the owner with a fully-paid-for yacht after the five years.

I’ve done two one-week charters from Piraeus: Once with my teenage daughter whose mother (my wife) had died a few years before; and once after I had married again, and my wife and I wanted to get to better know the man to whom my daughter had recently gotten engaged.

Both trips were a tremendous success. The first helped me to get to know my daughter as the strong young woman she had become, and the second permitted my wife and I to establish bonds with the man that my daughter married. Of the more than 40 cruises that I’ve gone on, these two were among the most enjoyable and satisfying.

Yachting opportunities abound, but first you need to decide you want to go. The Med is full of beautiful small ports in Greece, Italy, Croatia, France & Monaco, and Spain. The ports are typically just over the horizon from one another, and a 4-6-hour sail on a large cat will take you from one to another.

Each island is entirely different from the others. The island of Hydra, close to Piraeus, is largely a yacht basin surrounded by outdoor restaurants, a few stores, and rocky terrain. It was my favorite on both cruises. No motor vehicles are permitted on the island, and each table in the restaurants seems to have its own cat that expects to be fed from your plate.

The yacht charter operations in Greece are expected to open this November. By then, they will hopefully welcome U.S. citizens who test Negative before sailing; but health and airline restrictions should be carefully checked out by you or your travel advisor. Otherwise, you can try to recreate this yachting experience on either the Chesapeake Bay or the San Juan Islands.

Greece is much safer than the United States in terms of COVID-19. According to the World Health Organization’s September 12 statistics:

Motor yachts are also available in Greece, but fuel costs may double the price of the charter. The distances between ports are so short as to render full-time motoring unnecessary, and nothing is so peaceful or exciting as a cat under sail. You’ll be invited to sail the ship whenever you want. Depending on your skill level, the captain will either be at your side or enjoying the other guests.

Since the yachts are equipped with push-button winches to raise and adjust the sails, GPS and a strong engine to navigate to your next anchorage if the wind fails, and a knowledgeable captain to watch over everything and make reservations – I’d really recommend sails as the primary method of propulsion.

A 40-55 foot catamaran resembles a condo more than a traditional sailboat. They typically have at least four small bedrooms, two bathrooms, three showers (one on the swim step), a fully equipped galley, an outdoor grilling area, and sitting areas both inside the hull and out in the sun. They don’t ”heel” like racing boats over on their sides, it’s virtually impossible to turn them over or sink them, and each cat has a small dinghy that takes you ashore if you’re not tied up to a dock.

On weekends or when anchorages are crowded, some boat will tie up to others. This is called “rafting.” If you are on a boat close to the dock, people may walk across your deck to reach the shore. Tradition dictates that they won’t stop to chat, peer into your cabin or cockpit, and they will keep their distance. I’d imagine that the uniform for going ashore during the day is now a bikini, flip-flops, and a mask.

If you’re interested in exploring chartering with a captain, I’d suggest using travel advisors who have chartered themselves or have arranged charters in the area in which you’ll be cruising. It helps if they have also been boat owners.

The first time you charter, I’d also recommend using one the large operators such as The Moorings or Sunsail. They have their own captains, sanitizing routines, and they can arrange to have your vessel fully stocked with your choices of food and drink. The larger vessels may come with a cook who is also your first mate. They typically have superb cooking and boat handling skills, and they should be tipped as well. Remember the captain and the first mate are skilled professionals and unless you’re a licensed captain, your safety is in their hands.

I suggest using some of the money you’ve saved by chartering a yacht, to buy Business Class or Premium Economy airfare; and be sure to book on airlines that restricts the number of seats they sell. Because you’ll be cruising on boats that typically limit you to being one duffel bag, try to avoid checking any luggage.

Make this the trip for which you don’t pack dress shoes or take anything that can’t be crushed inside a duffel bag. Then lean back and enjoy the ride.