20 Ways that Cruise Lines Can Keep You Safe | TravelResearchOnline

20 Ways that Cruise Lines Can Keep You Safe

Posted on November 18th, 2020 by Steven Frankel in Point-to-Point

Now that vaccinations are almost here, many long-term cruisers are transitioning from “Should I go cruising in 2021 or 2022?” to “Which cruises are likely to be the most satisfying and safest?” Most typical cruise junkies are over 65 and no stranger to maladies such as obesity, diabetes, and previous cardiac incidents. After a year “on the hard,” as sailors say, a lot of us are willing to take some risks to return to cruising.

If I’m describing you, your partner, or parents, how do you decide which ships to go on, and which destinations you to consider? What about a system for choosing between cruises? I’ve taken 20 features that are now included on some ships, and I’m using them as proxies for the quality and safety of a cruise. Asking reservation agents and travel advisors whether these features are included in your preliminary choice, will make it more likely that cruise lines will offer them.

To make things simple, make a checkmark next to each feature that are included in the cruise you’re considering. When you complete the check list, multiply the number of features you’ve checked by 5, and see how closely the cruise is to 100%. 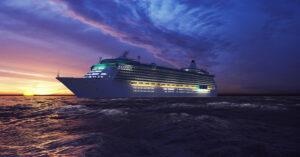 Crew members and guests are tested twice before boarding, and 3-5 days later.

Test 3-5 days before leaving, immediately before coming on board, and then 3-5 days after sailing. No single test is reliable; testing a few days after flying is essential.

Outside single isolation cabins have been set aside for guests or crew members.

On many cruises where COVID-19 broke out, those who tested Positive were not isolated from others and placed in well-ventilated, single cabins. Many experts thought that this had a cascading effect and led to further spread of the infections.

Crew members and guests use a computer-based contact tracing system.

MSC gave everyone bracelets to wear that unlocked their room, charged their drinks, and recorded the ID’s of every bracelet that was near to them. If anyone tests positive, these data can be retrieved and used to warn the people who came near and provide the ship with contact tracing data.

Turnaround times, between when cruises end and start, are at least a day apart.

Deep cleaning public areas and kitchens requires that the ship be in port with no guests onboard. Rather than having only a few hours between when a group of guests gets off and another gets on, TUI Cruises (a luxury German cruise line that is 50%-owned by Royal Caribbean) has been scheduling turnarounds of at least two days.

Cabins are used on every-other cruise, so that time is available to thoroughly clean them.

Since many ships are limiting themselves to 50% capacity, TUI Cruises has been using each cabin on the Mein Schiff 1, no more than one cruise out of two. This permits 1-2 weeks for shampooing carpets and sanitizing mattresses.

Wearing masks is required nearly all of the time.

The recent Sea Dream debacle showed the folly of dispensing with masks, even when guests and crew have both been tested multiple times. According to CDC, masks are needed within 6- feet of others, both indoors and outdoors. It’s OK, CDC says, to slip masks down to eat or drink, but not to socialize.

Restrooms, spa facilities, and deck lounges are sanitized by staff after each use.

Washroom attendants are making a comeback. Anyone who endorses cleaning your hands in restrooms, but not sanitizing toilet seat, flush handles, and faucets used by others, is fooling themselves.

Positivity rates (Positive test rates) are less than 3% in ports.

This means that when the occupants of port cities are tested, no more than 3% of the sample should test Positive. This, along with daily testing, can make it unnecessary for guests to leave the ship in organized groups. Los Angeles, London, and Miami can’t meet the 3% standard: most ports in Australia, New Zealand, the Caribbean, and Asia meet it.

At least one port has an airport, isolation facility, and/or a good hospital.

The CDC now requires each ship to file a sailing plan detailing how It can handle each of these kinds of emergencies. The same port needn’t have all three.

Residents of foreign ports achieved low positivity rates by behaving better than most Americans. Studies show that day visitors in cruise ports spend less than $60 a day – not worth the costs and risks of COVID-19, in many residents’ eyes.

Many larger ships are relying on private islands and remote resorts to control conditions when guests leave the ship. This also avoids regulations that ports such as Key West place on the ships. A day or two of private islands and resorts is fine, but much more and you may as well book a Sandals resort instead of a cruise.

Passengers and crew are tested twice, 3-5 days before flying and just before they board.

Middle seats remain vacant except when people are flying together.

Social distancing is required on all flights. If this isn’t feasible, seat holders must be permitted to buy the seat next to them at a very low price. Those in Business or First Class must have special partitions that can be raised between them and other flyers.

Restrooms are sanitized by staff after every use.

As noted earlier, anyone who endorses cleaning your hands in restrooms, but not sanitizing toilet seat, flush handles, and faucets used by others, is fooling themselves.

Charter aircraft are used to take passengers and crew to and from ports.

Before cruises on German ships was closed down last month, TUI Cruises was using charter aircraft to contribute to its COVID-free record. Given that the line is 50-percent owned by Royal Caribbean, this concept could easily be extended to U.S.-based cruise lines.

Ship’s officers include a doctor experienced in pulmonary and cardiac emergency care.

In the past, it was joked that a ship’s doctor could have any specialties as long as they looked good in a tux at parties and the Captain’s Table. Now ship’s doctors may have to make life-saving decisions.

All cabins and common areas have balconies or windows that open.

European standards also dictate that air must be completely exchanged throughout the ship every few minutes and must use HEPA filtration. Not being able to do this affordably has caused many ships to be scrapped or sold off. Previous outbreaks show that these standards must be met in crew areas as well.

COVID-19 insurance is required for each guest and crew member.

This is already mandated in the Caribbean and on MSC, where it sells for about $25 a week. The coverages include delays, cancellations, quarantines, tests, hospitalizations, and air evacuations, whether they occur on the ship, in the air, or on land.

All guests and crew members will have to be fully vaccinated once vaccines are available.

Two Pharma companies have already announced millions of doses of highly effective vaccines will be available early next year; but it will probably take at least a year until vaccines are readily available. Until researchers have experience with them, no one knows how long they will be effective.

Deciding what scores on the checklist are acceptable will depend on your risk tolerance, you and your partner’s state-of-health, and your budget. With obesity, diabetes and a heart valve, I’ve been called a “train wreck” by medical personnel on several occasions, but I’m usually at my best on cruises. With more than 40 cruises completed thus far, we’re determined to start cruising within the next 18 months, but only if the cruises in which we’re interested score least 80%.

Cruises that will meet all of these expectations will undoubtedly be more expensive. Either we’ll have to dig deeper to afford them, or we may have to compromise on the length of the cruise or select fewer amenities.

The “Small Ships” with fewer than 1300 visitors will be able to meet these standards most easily. On the other hand, a few TUI ships such as Mein Schiff 1, achieved a perfect safety record before summer cruising ended last month. It normally carries 2894 guests, but it sailed less than half-full to beat the coronavirus.

MSC, an independent Italian/Swiss line, had several ground-breaking innovations such as: contract-tracing systems built into bracelets, low-cost COVID-19 insurance, and restricting guests from leaving the ship in ports, except to go on MSC shore excursions. The MSC Grandiosa normally sails with 4842 guests but was carrying fewer than half this number while sailing from Italy during the summer. Further, they did this without charging jaw-breaking fares. This goes to show that most of these features can be included – if the cruising public learns to value them more than free gratuities and discounts.