Posted on November 4th, 2020 by Steven Frankel in Point-to-Point

The NIH No-Sail Order expired this past Saturday, October 31. But read the details, and you’ll see that no cruise lines have permission to sail just yet. Before they’re permitted to sail, they have to build laboratories onboard each ship that can test all crew members weekly, document in detail how they will deal with any outbreaks, train crew members exhaustively, conduct practice cruises without paying passengers, and certify ships individually when they meet these and other requirements. And, if COVID-19 outbreaks occur on any of their ships, their permissions to cruise can be taken away, even in the midst of a voyage.
People magazine’s headline on October 31, for a story written by Georga Slater, summed up the picture perfectly:

CDC Says Cruises Can Set Sail Again, But Passengers Will Not be Allowed on Board 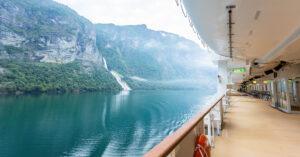 In addition to building the laboratories and conducting practice cruises, the cruise lines may also have to meet engineering requirements related to ventilation, social distancing, and sanitation recommended by industry panels and U.S. or European agencies. Per the EU’s requirement, for instance, it’s likely that all cabins — including those assigned to crew members — will have to vent directly to outside the ship, have supplemental HEPA filtration similar to those used in hospital operating rooms, and adequate numbers of quarantine cabins (singles with their own bathrooms) that must be set aside to isolate guests and crew members who have tested positive. Ventilation and filtration requirements apply to all common areas.

It’s these kinds of regulations that have already sent dozens of ships to the “boneyards” of Turkey and Bangladesh, to be broken up and sold for scrap, since the refits are greater than the earnings potential of some ships.

Despite the optimistic expectations voiced in many press releases and marketing pieces, it’s unlikely that any ships, except for those that have completed reengineering their ships, will be able to make these changes, go through the shakedown cruises, and carry paying passengers in less than 90 days. For most ships, 6-12 months is a more realistic expectation. If everyone knows what is required of them, this becomes a level playing field in which no company is able to “game” the system.

However, this is not the case. The NIH and EU guidelines only pertain to those ships that embark or disembark passengers in American or European ports. The thousands of cruises that start and end in other nations (e.g. Bali to Sydney) are only affected if the port nations opt to adopt these same standards. Some, such as Great Britain, Australia, Canada, New Zealand, and Japan, are likely to adopt them. But what will happen on cruises to the Caribbean, Latin America, much of Asia, Africa, or the Middle East is anyone’s guess.

If cruise lines “voluntarily” adopt the same standards for ships sailing out of all of their ports, this will be a start in the right direction. However, will cruises be able to commence on ships that merely promise to meet these standards – making them moving targets? Also, how will standards be monitored and enforced? Cruises lines doing their own policing led to many of the COVID-19 debacles occurring when the pandemic first emerged.

The NIH “solution” is actually a carefully crafted response to a bureaucratic quagmire: “How to delay making definitive, potentially life-threatening decisions, until after the U.S. elections are over?”

On the one hand, you have the White House, the Governor of Florida, many cruise companies, suppliers, and thousands of unemployed workers and small business owners, who are all convinced that not to resume cruising as quickly as possible, points the way towards economic catastrophe. They are supported by even greater numbers of individual cruisers, who are eager to cash in their cruise credits and start cruising again before some companies go bankrupt. If this happens, the guests may end up with only a small percentage of the millions of dollars’ worth of deposits and full payments that the cruise companies have taken from them.

On the other hand, the NIH first tried to extend the No-Sail Order until February 15, 2021. The White House is credited for stopping this. You also have the public health experts who point to the rising infection rates in the U.S., Europe, and many other areas of the world, and say that the last thing the world needs now are additional opportunities to spread the pandemic.

Many countries that benefit from cruise tourism identify Americans as the new pariahs. Many of their citizens don’t trust our attitudes and practices when it comes to health safeguards. They ask, “If Americans can’t behave well at home, why should they behave any better on cruises and vacations among people they don’t know?” The proof of this is that nearly all the cruise lines that have resumed cruising in Europe and Asia explicitly prohibit U.S. passport holders from sailing with them.

Also, people don’t realize it, but most cruise lines that cater to American guests – even those listed on the New York Stock Exchange – are not subject to all the protections offered by the NIH, Coast Guard, Navy, State Department, SEC, FTC, or most other parts of our government. This is because nearly all cruise ships owned by cruise lines headquartered in the United States are flagged in Malta, Panama, Bahamas, and other nations where taxes are cheap, worker protections are few, and inspections are practically nonexistent. This gave Congress and the White House a solid reason to delete cruise lines from the businesses receiving special assistance during the pandemic.

It also raises doubts as to how emergency evacuations, hospitalizations, and repatriations of guests and crew members will be handled if infections break out on some ships that resume sailing. That’s why few members of Congress and no U.S. President has gone on record as insisting that Royal Caribbean, Carnival, Norwegian, and smaller cruise lines reflag their ships so that they are subject to American health and safety regulations, and full taxation.

Reflagging ships comes with both political and financial risks. It requires an Act of Congress to repatriate each ship so that it cruises under the American flag. If this is done, let’s say, for all ships owned by corporations listed on U.S. stock exchanges, will this make the U.S. responsible for repatriating or hospitalizing thousands of crew members who are still on board those ships from the initial pandemic? What about having to use our dwindling intensive care facilities and hospital beds, to treat victims of future outbreaks from cruise ships that fall under our expanded jurisdiction? These are issues that will have to be addressed, if we exert authority over all the ships owned by American corporations. On the other hand, we will at least benefit from all the taxes they would be paying; which should eventually offset expenditures made in pandemics.

The cruise lines are unlikely to help in future serious outbreaks. After all, they won’t even return funds that were turned over to them by unsuspecting guests. They are treating these as indefinite, no-interest loans. They are using technicalities built into their contracts, which those selling the tickets do not explain, to avoid repaying those debts in cash, so the guests are free to book on other cruise lines or delay cruising until they feel safer. As of now, if they don’t cruise by 2022, they will forfeit millions of dollars.

Unless nations exert jurisdiction over any cruise lines headquartered within their borders, the victims of future COVID-19 outbreaks onboard cruise ships will be sailing into the great unknown without a chart or enforceable regulations to guide them.

It will likely take at least year to work out arrangements that will adequately protect guests and crew members. That’s why, the delays built into the NIH procedures are a good thing. Even if Congress is pressured to permit cruises to begin earlier, it’s unlikely that many foreign nations (except for this driven by economic desperation) will permit Americans to enter their ports until they have close to 100% assurance that outbreaks from the ships won’t spread to the local inhabitants.

We also need enforceable regulations and procedures on the following issues for all the cruise ships that resume sailing:

If the past six months have taught us anything, it’s that cruise lines can’t be trusted to clean up messes by themselves, without regulations and funding. None of these questions would have to be asked if the cruises lines were able to provide effective solutions.

No new technologies are needed to adopt these health and safety procedures. “All” that’s needed is the will for cruise lines to implement them; and for guests to understand their importance and be willing to pay for them.

Some will argue that most of these remedies have already been proposed as standards and efforts to implement them are already underway. That’s fine, now make them all “musts,” without which ships are not be permitted to sail or collect deposits or revenue.

Cruise fares will have to increase for these safeguards to become realities. But if guests realize that these precautions are necessary to permit safe sailing, it’s likely that they will (perhaps grudgingly) go along with the fare increases and the regulations that will accompany cruise ships wherever they sail.

Share your thoughts on “Tough Questions for Cruise Lines & Guests”