Posted on November 11th, 2020 by Steven Frankel in Point-to-Point

In the past five months in this column, I’ve suggested ideas that I’m sure many readers felt were unrealistic. Let’s see how well I’m doing.

COVID-19 is changing cruising in ways we couldn’t have imagined five months ago.

I’ve advanced this idea in three columns. One dealt with how inexpensive saliva tests can do it; another described how “breathalyzers” could do it; the third article detailed how testing the wastewater emanating from each cabin’s toilet can do it without involving the guests at all.

The capability to do daily testing is especially needed the first few days of a cruise, since tests have a possibility of errors. Testing is also helpful before and after port visits, and if anyone with whom guests have been in contact tests positive.

With daily testing, there is no longer any need to limit cruises to seven days. If people are on cruises that spend several days at sea, the medical officer on the ship may opt to eliminate daily tests if everyone onboard tests negative.

Viking’s Viking Sun is now the first cruise ship equipped with a COVID-19 PCR testing lab that can test all guests and crew members daily using PCR saliva tests. Tests are inexpensive and requires you to just spit in a test tube. The results can be available in less than an hour.

The Center for Disease Control (CDC) now mandates that these labs be installed on all ships. Therefore, expect to see them on any ships that may wish to dock in American ports. Other nations are likely to require labs as well. 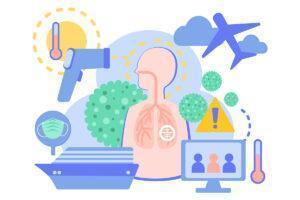 I suggested if the airlines didn’t want to install these safety measures on all their flights, perhaps the best solution may be for cruise lines to charter, reconfigure, and staff aircraft themselves.

The ships of the German cruise line, Hapag-Lloyd,  began doing this. Two of their ships, the Europa 2 and Europa, are the only two ships in the world rated by Berlitz Cruising & Cruise Ships (by Douglas Ward) for 2020 with 5+ Stars. If you haven’t heard of these ships, it’s because Hapag-Lloyd caters to the German cruise market. However, this could change in the future because Royal Caribbean Cruises has just increased its investment in TUI, the German parent company of Hapag-Lloyd, to 50 percent.

While Germany has just stopped all of its ships from sailing, as a part of its clamping down on the COVID pandemic, according to Cruising Industry News, “the German cruise brand has a perfect safety record, having carried more than 40,000 passengers since July 24 and without a single corona incident.”

TUI was using charter aircraft to fly passengers and crew to and from turnaround ports, thus remaining in a “TUI bubble” from the time they left Germany until they returned. Given its 50 percent investment in Hapag-Lloyd, Royal Caribbean could expand the charter aircraft program to some of its American brands.

I mentioned that another problem cruise lines faced is providing more effective cleaning of cabins and public areas when one cohort of guests get off the ship and are replaced by other passengers. I suggested providing more than a day between turnarounds.

However, Hapag-Lloyd employed another, even more effective strategy, for solving this problem. Since they, along with most other cruise lines, have cut the number of guests they carry by about 50 percent, they used the cabins on an alternating basis; giving staff a week to “deep clean” the cabins they used the week before. This permitted briefer turnarounds since crew had an entire week to clean and prepare each cabin. On turnaround days, this permitted the entire housekeeping staff to focus on deep cleaning the public areas.

As noted earlier, Royal Caribbean now owns 50 percent of Hapag-Lloyd. I’d suspect that this strategy will also find its way onto other cruise lines that they own.

Repatriate Crew Members and Compensate Them for Working During the Pandemic

In a recent column, I noted that thousands of crew members have not been flown back to their homes or paid for their time doing the pandemic. These actions are facilitated because most cruise ships are flagged in Panama, Malta, and other nations that provide crew members and guests with few protections. Only a few cruise lines have ships that are flagged in the United States or the European Union.

I noted that flagging their ships in these small nations permits the cruise lines from paying more taxes, but is probably contributing to the reluctance of Congress to provide more financial assistance to the cruise lines.

This week, the German cruise line, Aida, which is owned by Carnival, issued two separate press releases. One announced that Aida was negotiating a loan of $400 million euros with the German Economic Stabilization Fund. The other announced that Aida was repatriating all remaining crew members (on charter flights if this was necessary) and paying them for the time they had been marooned on the Aida ships.

Why has Carnival chosen to do this on Aida, but not on its other cruise lines? Could it be because Aida’s ships are flagged in Italy and Germany, where employment agreements are enforced?

It’s now Monday morning, two days before this column will appear. Pfizer has announced that preliminary results suggest their vaccine is 90% effective, and the prices of cruise line stocks are soaring. Carnival is up 30 percent, and Royal Caribbean is up 20%. For Carnival, this is the most rapid stock increase that it has ever experienced.

Stock prices predict future earnings about 6-24 months off. It will take about this long for the United States and the places cruise ships visit to vaccinate nearly all people.

In the meantime, frequent testing, masking, and social distancing will still be the orders of the day. Any further stalling will cause the baseline of infections that we’re now experiencing to rise sharply, extending the time until we can reduce many of the COVID-19 mitigation measures described in this column.

Some cruise lines may try to take shortcuts, such as trying to take their tryout cruises, before completing the engineering and sanitation modifications. Based on the experiences of this summer and fall, when nearly all early cruises resulted in guests and crew getting infected, these efforts to accelerate the process will probably cause further harm.

It would be better to focus in the next six months on completing the work that needs to be done on selected small ships and completing their shakedown cruises, applying for their permissions to sail, and negotiating the terms that ports will demand. Many of the ports may only accept ships on which all passengers and crew members have been vaccinated and tested, and we should be prepared for this.

Few ports with 5,000-10,000 permanent residents will want to be visited by thousands of different, unvaccinated visitors every week. Like Key West, they may only welcome ships carrying fewer than 1300 guests with no more than 1,500 total guests permitted onshore each day. Like Key West, they may also prioritize ships by pollution and safety records. Since recent studies have shown that day-visitors from cruise ships spend only about $60 each in ports, they can afford to be choosy about whom they invite.

Share your thoughts on “What’s Happening to Cruising? – A November Update”