Perillo Prepares for the Resurgence | TravelResearchOnline

Perillo Prepares for the Resurgence

Posted on December 10th, 2020 by David Cogswell in The Incessant Traveler

Perillo Tours has had a quiet year. As a specialist in travel to Italy for three generations, the company was paying close attention when Italy became the first country outside of Asia to get hit hard with COVID-19. The devastation in Italy was terrifying, and one of the early windows into what was coming to America.

Steve Perillo, president and CEO of Perillo Tours, realized early on that he was going to be forced to cancel some tours. No one knew how long the siege would go on. It just kept getting worse.

It was a slow and painful unraveling, reflecting what was starting to take place throughout the country.

About 60 percent of Perillo’s customers held onto their bookings this year, and just postponed their departures till 2021. Now some of those bookings are getting pushed further down the road.

“We really don’t know when we’ll operate,” he said. “The three vaccines are proving a positive influence. As of today, I’m basing the future on this single New York Times podcast this morning that said the nursing homes will get vaccines in January and the rest of us in May.”

The office had been pretty quiet for months, but the news about the vaccines had an immediate effect.

“We saw the first glimmer of something when they started talking about vaccines,” he said. “That’s really what’s making people happy.”

The Age of Virtual Travel 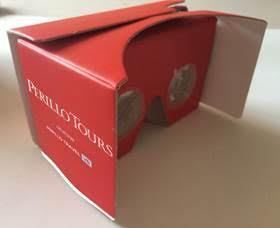 Meanwhile, Perillo has continued to promote its virtual reality travel venture that it has been developing for the last few years. As 2020 became the Year of No Travel, virtual travel gained a new significance.

“They have done VR of the Colosseum,” said Perillo, “but you have to stitch all the eight videos together and hide the stitches. It’s a long, involved process. But now with this new technology you can stitch the videos together all in the camera. That’s a big breakthrough.”

With that technology, Perillo will be able to have live walking tours or cooking classes, not just in video, but in 360-degree virtual reality.

A virtual reality tour is good for education about travel, for inspiration, in this case for realtime participation in a tour activity through the virtual reality medium.

But no one poses virtual reality as a substitute for real travel. The year 2020 makes that clearer than ever. Still, if you can’t leave your home, as has been the case for millions in 2020, virtual travel may be as close to the real thing as you are going to get for a while.

Meanwhile, with vaccines on the horizon, and good data supporting the efficacy of masks and distancing, people are starting to ease back toward being able to travel again, under modified conditions.

“Our big breakthrough,” said Steve, “is that we offer the same tour that we normally offer, but for as few as 12 people. They can commandeer the whole bus. It costs 10 percent more than the brochure rate. But it enables family and friends to get together and you’re all by yourself for the whole trip. You get the full treatment. We’re starting to sell that.”

With 17-24 people, the rate is 5 percent above the brochure rate. The normal capacity on a Perillo coach is 40.

Music and Other Things

Though there is a sign of a pick-up in business on the horizon, for now things continue to be slow around the Perillo office. Steve Perillo is waiting it out, making preparations for the best-case scenario, a release of pent-up demand and a strong resurgence in travel. But he’s also ready for the worst.

“We treated 2021 like a normal year,” he said. “We came out with our programs in summer just like every year, because there’s no way to predict. We don’t know what’s going to happen. I’m doing more music and doing other things, because I know when it does come back, ‘22 is going to be monster year, if nothing else happens.”

One of the big questions of the COVID period is “What will you do with this time of forced isolation and pause from normal activities?”

In 1606, when Europe was consumed in a plague that took down nearly a third of its population, Shakespeare wrote three of his greatest plays: Macbeth, King Lear and Antony and Cleopatra. A high bar, though inspiring.

For Stephen Perillo, “doing more music,” means returning to the career he was embarked on during his 20s and 30s, long before 2003 when he took over leadership of the company founded by his grandfather as Joseph Perillo and Sons, a travel agency, in the Bronx in 1945. Steve grew up in the company, working in the office putting brochures in envelopes from when he was 7.

But behind the mantle of CEO of a major tour operator, Stephen Perillo is a composer. He attended Boston University School of Music in the mid ‘70s, and studied privately with Pulitzer Prize-winning composer David Del Tredici, who encouraged him to follow his impulses to write melodic music, going against the grain of academia at the time, which was deeply involved in atonality and looked at melody as a thing of the past.

He wrote melodic pieces for traditional ensembles with light titles like “Crushed Tomatoes” and “Requiem for a Goldfish.” He composed soundtracks and hosted a weekly radio show on which he played piano, showcasing his own works as well as a wide range of other music.

He built a catalog of compositions with dozens of piano works, more than 100 pop songs, a dozen chamber works, eight extended tone poems, a piano concerto, and a “Magnificat for a New Millennium” for mixed chorus and orchestra, which was commissioned by the Benedictine Order and premiered in New York on May 23, 2001.

His orchestral piece “Requiem for a Goldfish” was released on Centaur Records, performed by the Russian Festival Orchestra. A series of recordings of his compositions is available on CD at Arkivmusic.com.

In 2020 Stephen has been pulling out his old work and organizing it.

“I did a lot of writing for solo piano and pop songs in the late ‘70s ‘80s and ‘90s,” he said. “I’m collecting it all, putting it in the computer, kind of tying up my whole life. It’s like I’m meeting the composer I don’t know. I left the stuff 30 years ago. And it sounds way better than it ever did. I’m in shock.

“When you’re doing it… you know what it feels like when you finish a song, and you get these blues because you don’t know if it’s good. And you’ve heard it so many times. Then years go by and you turn it on. And you go ‘Wow, that was really good.’

“So I’m appreciating my other self. It’s almost as if I am uncovering another person, from when I was in my 20s and 30s. I’m not as good a composer as I used to be. But I’ve got 50 hours’ worth of stuff, so I’m getting it all together. I’m going to populate Steve.com with it.”

He may still have a few more months to complete the project. Let’s hope it isn’t any longer.

Share your thoughts on “Perillo Prepares for the Resurgence”