Sales Lessons From ‘The Queen’s Gambit’

Posted on January 11th, 2021 by Mike Marchev in Mike's Monday Cup of Mo-Joe

I am not a regular when it comes to TV viewing, but I capitulated when my son strongly recommended I watch a particular program on Netflix. The show features the exploits of an orphan who later became a chess genius. I was glued to my TV as each of the seven episodes unfolded. It is reported that this was Netflix’s most watched serial, The Queen’s Gambit. You do not need to be a student of chess to enjoy and personally benefit from this program.

I was entertained for sure. But more specifically, I was engrossed in the story line. Although far from the story’s main theme, I was often reminded of a number of sales lessons. I would like to share a few of these with you this week. 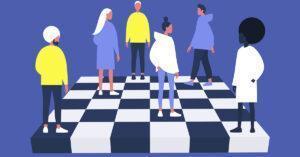 Beth, thanks to a little outside stimulus, would visualize a chessboard on the ceiling. She mentally ran through a number of various moves while envisioning her options. Pro athletes have always introduced a form of visualization into their training routines. Successful sales professionals play and replay their presentations prior to delivery. They too address the potential objections and concerns prior to sitting down to discuss business.

Merlin Olsen was a Hall of Fame lineman for the Los Angeles Rams. He once went on record to say, “If I am not practicing and my competitor is, when we meet they will beat me.” Beth (in The Queen’s Gambit) was constantly reading about her craft. She repeatedly rehearsed set moves and strategies with study and replay. To be the best you have to work at being the best… consistently. Are you reading, studying, and practicing your trade? My guess is that you can be doing more than you are now doing. Think about it.

You can be the best and have superior skills, and still come up in second place at times. One reason for this may be due to superior competition. A second reason may be that your energies and concentration levels are low on any particular day due to hundred different possibilities. Bottom Line: You will never win them all.

This particular lesson was illustrated when a former orphan from an earlier episode reappeared and loaned Beth money to travel to Russia. She did this based on the faith and belief she had in her old friend.

Many of you are entrepreneurs who rely on your own judgment and survival skills. The truth is that you can’t achieve star-status all by yourself. You need other smart and dedicated people to support your progress. When your skills come up short, you need somebody watching your back.

Near the end of the program, when Beth was being tested to the max playing the world’s best, she received a phone call from a group of her peers back in the United States who researched her next possible moves. I found this to be an emotional element of the program, as there is something about teamwork and winning (or losing) as a team that scratches my itch.

Let me fast forward to the final scene where Beth bellies up to city park’s chess zone and takes the challenge from a local hobbyist.

She was the best in the world at the time, yet she still was not above playing a game of chess with the locals. As you become more skilled in your craft, don’t forget to help those on the lower rungs of the ladder take the next step.

I will leave you with one more fact to ponder. The Queen’s Gambit took nearly 30 years to air on television. There were a total of eight directors and nine re-writes. There is no such thing as an overnight success. Visualization, preparation, love of the game, dependable support, teamwork, and a sense of community will see you to the winner’s circle.

Mike Marchev is always looking for a few more proactive travel professionals to join his Sales and Marketing Club. Send for details.

Posted in Mike's Monday Cup of Mo-Joe | No Comments »
Tagged With:

Share your thoughts on “Sales Lessons From ‘The Queen’s Gambit’”