Getting in Position to Win | Travel Research Online

Getting in Position to Win

Posted on February 22nd, 2021 by Mike Marchev in Mike's Monday Cup of Mo-Joe

An accident on the last lap of the Daytona 500 resulted in victory for driver Michael McDowell, who had no chance to win up until then. After 498 miles of racing, this driver found himself “in position” to take advantage of a last lap pile up. The result was a trophy and a large sum of money.

The lesson was glaringly clear. If you ever want to have a chance to win as a result of the unexpected, you had better find a way to get yourself in “position.” Opportunities often evaporate as fast as they appear. You must be able to respond in a flash before giving your opponent room to rebound. 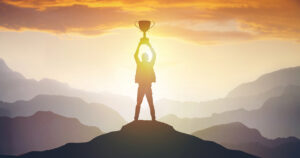 Michael McDowell did not have the fastest car. He was not the most talented driver. For 499.5 miles he never was in the lead. But at the end of the race, he was the winner. Why? He was in position to take advantage of the unexpected.

I remember a similar occurrence years ago in the Winter Olympics. The event was Short Track Speed Skating. Apollo Ono was a household name at the time. After jockeying for position through the final race, there was a last lap slip as all of the lead skaters smashed into the side-board. The “last” place skater was unaffected, and he stayed on his feet and finished the race… in first place. This Canadian-born long-shot went home with the Gold. I interpreted this as another example of being in position when the opportunity presents itself.

My final example supporting today’s message comes from an NFL Coach. I remember him telling a newscaster that his job was to make certain that his team was in position at the end of the game to win. If the score was close in the final minutes, victory still had a chance.

You are not going to win them all but, after 14 years of racing, Michael McDowell found himself doing donuts in the winner’s circle for one reason: HE WAS IN POSITION when it counted.

Here is a short video which will “drive” home today’s message. CLICK HERE.

Posted in Mike's Monday Cup of Mo-Joe | No Comments »
Tagged With:

Share your thoughts on “Getting in Position to Win”