The Sacred and Otherworldly Center of Australia | Travel Research Online

The Sacred and Otherworldly Center of Australia

Posted on February 4th, 2021 by Joey DeLoach in Outposts

Named after the red sands and clay that color a stunning land, the Red Centre of Australia is the heart of a country. This sacred area runs through the history of the Aboriginal peoples, with ancient wall paintings and myths surrounding it. From canyons to ranges, to Indigenous art and the famous Uluru, the center of Australia is a trip to a kind of natural experience of open beauty. 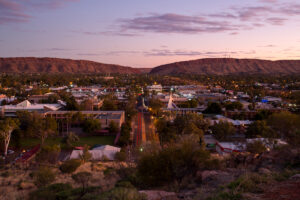 Home to the Arrente Aboriginal people for more than 50,000 years, Alice Springs and its surrounding areas are far removed from other cities in Australia (almost 930 miles from a major city). It is also the hub for all tours and travel to sites around the Red Centre, the town’s economy mostly reliant on tourism. Though Alice Springs is a prefect jumping point to see the natural wonders around the Red Centre, there are plenty of activities within the town itself.

The Kangaroo Sanctuary, an 188 acre wildlife sanctuary for orphaned baby kangaroo and adult kangaroos, started in 2011. Here the traveler can get up close and personal with the babies, and learn about how they are being cared for. A necessary stop in Alice Springs is Todd Mall, the town’s pedestrian-only main street. The traveler can peruse galleries featuring Aboriginal artists, paintings and sculptures. These are fantastic look into the culture and stories of the original peoples of the Red Centre. For the foodie, Todd Mall features cafes to have breakfast; and the Botanical Gardens, less than a mile away, is a relaxing walk—particularly grabbing a bite to eat at the cafe within.

Meaning ‘many heads,’ Kata Tjuta is a group of domed rocks about 220 mi south of Alice Springs, and is part of the Uluru-Kata Tjuta National Park. There are 36 red domes in this range, worn down by the test of time and red sand passing over the isolated range. There a few trails that range from easy to more difficult, including the Walpa Gorge Walk, a rocky path with a gentle rise. For the more adventurous, there’s the Valley of the Winds Walk, which is the longest of the Kata Tjuta at almost 5 mi with steeper inclines — but well worth the views.

Also in Uluru-Kata Tjuta National Park is the iconic and sacred rock formation known as Uluru. Though both Kata Tjuta and Uluru show the reddish-orange hue of oxidization, both are formed of gray rock—which can be seen in the many caves. The chips of iron on the outside became oxidized and rusted from the elements, giving them their unique hue. It is approximately 2 miles long and rises 348m above the sands—an impressive rising from the desert plains.

Considered the resting place for ancient spirits by the Yankunytjatjara and Pitjantjatjara people, Uluru has been a religious site for tens of thousands of years. The indications of this are obvious in the rock paintings found in the numerous caves. Witnessing these ancient voices in the form of art while walking along the staggering sites of Uluru will make a permanent impression in the traveler’s memory to shared for years.

A newer addition to the area near this magical place is the award-winning Field of Light Uluru. The brainchild of internationally acclaimed artist Bruce Munro, the show is name Tili Wiru Tjuta Nyakutjaku, which means ‘looking at lots of beautiful lights.’ The field stretches over the length of nine football fields and includes 50,000 lights. And, AAT Kings has the exclusive rights for travelers to experience this dazzling colors that add to the already spectacular sunrise of Uluru.

The Red Centre of Australia brings the traveler to a land of mystery and sacred history, a place that will astonish them with sights that can’t be seen anywhere else in the world. From rusted hues of rocks, to the sunrises and sunsets that overwhelm the senses, to the witnessing of one of the oldest existing cultures in the world—AAT Kings has them covered, and is ready to guide groups around otherworldly and exclusive sites.

Share your thoughts on “The Sacred and Otherworldly Center of Australia”