The Three Most Difficult Questions for Travel Advisors to Answer | TravelResearchOnline

The Three Most Difficult Questions for Travel Advisors to Answer

Posted on February 10th, 2021 by Steven Frankel in Point-to-Point

In sales, health, and politics, difficult questions are ones that don’t have simple answers. Here are the three questions travel advisors hate to be asked right now.

Will Vaccinations Be Required If You Want to Cruise or Eat in Quality Restaurants?

Today’s vaccines can prevent most deaths and infections from COVID-19. Once people are fully vaccinated, some will get sick and may be infectious—but very few will die.

Several recent polls have reported that 79%-85% of cruisers will get vaccinated if this is made a requirement; and that no more than 5% will refuse to cruise if vaccines are mandated. Most cruises are terminated if even a few persons become infected. Why would any captain, or CEO, risk seeing a half-billion-dollar cruise ship sitting idle if a combination of vaccinating, testing, and masking can largely prevent this from happening?

These precautions are also likely to be required in many ports that cruise ships visit. Health passports will likely be scanned by immigration authorities before cruisers are permitted to depart the dock area.

The same is likely to hold true for popular restaurants, both in the U.S. and abroad. Health passports will likely be scanned before anyone is permitted to enter. Why will owners risk having their restaurant closed down when a scan of vaccination and testing data can remove most of the risk? 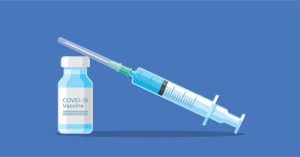 When Be Will It Safe for Larger Ships to Cruise?

Last week’s article, The Small Ultra-Luxury Ships Are the Safest for Cruising, showed how a few simple calculations can separate true ultra-luxury ships from the pretenders. These metrics also have a huge impact on how safe it is to travel on a ship you’re considering for a cruise.

The first metric is the passenger/space ratio. This is calculated by dividing the ship’s tonnage by the passenger capacity. It is a measure of spaciousness: How much space is available so that people are not often crowded together? It determines how much social distancing can be achieved on different ships, but it also predicts how happy people will be with their cruise. No one likes spending much of their vacations in lines, or jammed into a showroom only a few inches from other guests.

The second metric is the passenger/crew ratio. This is calculated by dividing the passenger capacity by the number of crew members. This determines how many tables a waiter serves in a restaurant and how many times a day your stateroom is cleaned or freshened up.

The third metric is the percent of balcony staterooms. We learned early in the pandemic that the ventilation systems on ships were suspected as causing some guests to become infected. This was cited most frequently in inside staterooms, and in those without windows that opened. A simple mitigation, if you have a balcony cabin, is to keep the sliding door slightly open much of the time. If nothing else, it assures you that you won’t be breathing only recycled air in your stateroom and, if the weather is agreeable, the balcony is a great place to eat and nap.

The ships in this table represent a broad cross-section of the American cruise market. The data come from the 2020 Berlitz Cruising & Cruise Ships, by Douglas Ward. However, with the possible exception of the Berlitz Stars (which are proprietary), the data are also available from many other sources, including the cruise line’s official website.

The Berlitz stars are listed for each ship to help assure that this sample is unbiased. All of these ships have at least four stars. This means that they rank in about the top third of the 300+ ships reviewed in the book.

By examining this table, let’s see what we can learn:

Thus, if the Celebrity Equinox was carrying only 1711 guests (2852*.6), their passenger space ratio would be 71 (midway between the Seabourn and Regent ships), the passenger/crew ratio would be 1.4 (nearly as low as the two SULS), and all rooms without balconies could remain unused. In fact, some balcony cabins can be set aside for use in quarantine situations, and others can relieve crowding in the crew quarters.

This will work on any ship whose passenger/space ratios are in the 30’s or40’s, and the percentage of balcony staterooms are in the 60’s or higher. It even works on the Azamara Journey, which is 21 years old. While other expensive modifications may be required—especially on the older ships—these may be worth doing on ships such as the Azamara Journey, which has a loyal following and is in good condition.

If a cruise line keeps 40 percent of their staterooms empty, fares will likely have to rise. However, if the increases aren’t too bad, many ships whose guest capacities have been limited will likely sail full. The pent-up demand, the smaller capacities, and the improvements in spaciousness and service, will justify the ships moving into a higher price bracket. In fact, if the new pricing proves to fill the ships, they may sail with these lower capacities for their remainder of their useful life.

Ships that move to these reduced passenger capacities, and don’t require extensive engineering modifications, could probably begin sailing this summer; especially if the CDC relaxes their prequalification requirements for ships that raise their passenger/space ratio and reduce their passenger/crew ratio to specified levels. Coupled with mandatory vaccination and testing, the new ratios will make cruising more satisfying and safer than it has ever been before.

How Can Flights, To and From ports, Be as Safe as Cruising on Limited Passenger-Capacity Ships?

Many experienced travelers don’t believe airline advertising claims that their ceiling-to-floor ventilating systems make flights safe. The study that is often cited for this claim was done on repatriation flights of military families returning to the United States—a far cry from usual passengers. Also, according to USA Today, “A report published in the journal of the European Centre for Disease Prevention and Control, a European Union health agency, said 13 of 49 passengers on a 7½-hour flight to Dublin, including a child, tested positive for COVID-19, and another 46 in contact with them in Ireland became infected. Four were hospitalized, one in the ICU.”

It would be easy, and inexpensive, for airlines or government agencies to conduct independent studies that rely on contact tracing to put this issue to rest. The airlines already have all the needed data to follow up on fliers, a month after their flights, to see whether they have become infected or may have inflected others. The only apparent reason for the lack of these studies is that no one at the corporate level or in the regulatory agencies is really sure of what to do if the airlines’ safety claims are refuted.

Until studies prove that additional safeguards are unnecessary, the minimum airlines should do is test every guest twice before each domestic and international flight, and require vaccinations of everyone—guests and crew members alike—once vaccinations are readily available.

To encourage more people—especially seniors—to sail, cruise lines could offer their own dedicated charter flights between popular gateway airports and destinations, both before-and-after cruises. These flights would offer additional safeguards, such as leaving middle seats vacant and having washroom attendants who clean bathrooms frequently. With these safeguards in place, probably no one who is willing to go on a cruise will hesitate to fly. Those who don’t want to pay the additional cost for charter flights will still be able to make their own flight arrangements.

“Would you prefer to book the cruise line’s special charter flights, or have a stateroom on the concierge deck with a butler?” Guess what your most valued clients will say.