Posted on March 3rd, 2021 by Steven Frankel in Point-to-Point

When it comes to COVID-19 vaccinations, Israel is one of the few nations that is well ahead of the United States. It has just passed the 50% rate for vaccinating ALL of its residents, not just only those who are senior, which is what we’ve achieved. It also has stockpiled enough vaccines to inoculate all Israelis over the age of 16.

Now Israel is facing the problem that we will probably be experiencing in a few months: What do you do when you run out of people who volunteer to get vaccinated? To ensure that Israel goes from the 50% vax rate to the 75-85% rate that experts say is necessary to establish “herd immunity,” the Israelis have established a “Green Passport” program that will affect travel, dining out, public entertainment, and some jobs.

Green Passports will be issued only by the Israeli Health Ministry upon proof that someone has been fully vaccinated or has recently recovered from COVID-19. The documents are considered so critical that hospitals, clinics, and doctors will not be permitted to issue them. Similar to regular passports, they will only be issued by the government. 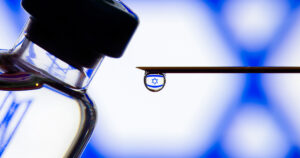 As The Jerusalem Post wrote last week, “A green passport will be required to enter certain places and to participate in certain activities. Only people who have been vaccinated or have recovered from coronavirus will be eligible for one. Travel abroad is just one of the perks of Israeli green passports; others are admission to gyms, theaters, hotels, concerts, and synagogues.”

Health Minister Yuli Edelstein said, “This is the first step back to an almost normal life.” Green passports will be valid for six months; this leaves the door open for booster shots or revised vaccines later on down the road. Green passport data will be stored in government computers and will be readable on IOS and Android devices that can scan high-security QR codes and digital signatures. Israelis will likely use their QR codes several times a day in the course of everyday life.

Edelstein added that soon there would be places of work that will have to require their staff to be vaccinated or else undergo a coronavirus test every 48 hours. “People who try to forge a green passport will face criminal charges and may even be jailed,” Edelstein warns. “You should get vaccinated now because it takes about four weeks to reach maximum immunity and receive your green passport. It is our duty to take care of the health of all Israel’s citizens, and we will not compromise on that.”

Also, for persons in some critical occupations who are unable or unwilling to get vaccinated for reasons, including religion, the Israeli media are openly considering requiring negative covid tests every two days—if unvaccinated people want to keep working in these fields.

Will the United States also engage in these forms of hardball when our vaccination rates pass 50%, and we find ourselves stretching to get to the 75-85% level when we can “return to normalcy?” Some experts say Americans need to consider whether we too will adopt green passports to safeguard cruise ships, hotels, resorts, air travel, and entertainment venues.

It’s a virtual certainty that nations such as New Zealand and Australia, which have closed down all forms of travel for a year and have been rewarded by seeing their infection rates go down close to zero, will adopt green passports without hesitancy. Many other nations have also launched similar programs.

Edelstein insists the vaccinations in Israel are not compulsory. But, “anyone unwilling or unable to get the jabs that confer immunity will be ‘left behind.’”

If we embrace green passports and tests before traveling on aircraft and ships, we may be permitted to travel almost everywhere by the Fourth of July.

Yesterday, as this article was being put to bed, Royal Caribbean International announced that the newly built Odyssey of the Seas would have Haifa, Israel, as its first homeport when it would begin sailing this May. A press release said that the first sailings would be limited to Israeli green passport holders who could reserve 4–7-day sailings to the Greek Islands and Cyprus.

These are among the nations with which Israel is presently negotiating to have Israeli green passport holders able to travel freely in their countries and giving fully vaccinated tourists from these nations full access to Israel. It’s likely that with Royal Caribbean sailing from Haifa, the Israelis’ will all try to negotiate similar arrangements from the United States, Canada, Australia, and Great Britain—RCCL’s largest customers.

It will also have to negotiate similar arrangements with airlines flying to Israel, since flights to Israel are prohibited. In one fell swoop, this will make international cruising available to Americans at least a month before it was forecasted to begin—but only if we’re vaccinated.

This is more than just a marketing ploy. The Odyssey of the Sea’s sailing out of Israel has already been endorsed publicly by the prime ministers of Israel, Greece, and Cyprus. Israeli Prime Minister Netanyahu said:

“This is an important economic, touristic moment for the State of Israel. Israel is a global model of success. We will continue our program—the ‘green passport’—so that we can get out of the COVID-19 virus in peace. Just as we made Israel the world champion in vaccines, we will make it the world champion in economics and tourism in the post-Corona era.”

According to Cruise Industry News, “In conjunction with Israel’s health and tourism authorities, Royal Caribbean will be the first to offer fully vaccinated sailings, where both crew and guests above the age of 16 will be vaccinated against COVID-19.”

Look for Royal Caribbean to approach Singapore next—from which they have also been sailing with only Singaporean citizens on Voyager of the Seas—about opening these cruises to anyone who is fully vaccinated.

Once this occurs, look for Carnival and Norwegian to make last-minute itinerary changes to enable some of their ships to home-base in Israel and Singapore, for at least the summer and fall. Israel and Singapore are among the most entrepreneurial nations on earth, and it is unthinkable for them not to take full advantage of this situation by championing full vaccinations as the world’s standard for travel.