The Rise of Uber-Luxury Ships

Posted on March 24th, 2021 by Steven Frankel in Point-to-Point

For at least the past five years, Regent Seven Seas has been the leader in cruises that give a new meaning to the label All-Inclusive. To most travel advisors and experienced travelers, “all-inclusive” meant that the costs for all beverages, tips, fees, most specialty restaurants, concierge or butler services, and economy air were built into the price.

Using that definition, Regent, Silversea, Seabourn, and Crystal—and sometimes Oceania, Cunard, Celebrity and others—can proudly claim that they were all-inclusive; at least when certain promotions are underway and for some levels of accommodations (“Free economy air and butler service for all guests in penthouses & concierge suites.”) 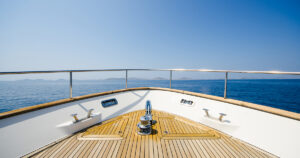 “All-inclusive” became a phrase that differentiated luxury cruises from mass-market sailings. Whereas a couple sailing on Seabourn would have an invoice slid under their door on the last night of the trip that was only a half-page long, guests on Carnival, Royal Caribbean, or Norwegian might—even today—receive statements that includes dozens of cokes charged at $2 apiece, with an 18% service charge attached to every drink.

On the mass-market ships, the guests are attracted in by very low fares (“$499 for a seven-day cruise”); but, once the hook is baited by the very low fare, dozens of other charges are added. Many cruise veterans despise “a la carte pricing” and avoid any cruises that don’t at least include cruise packages that cover gratuities, tips, and drinks for a set price.

Increasingly, as access to the internet becomes more critical, daily or minute-by-minute prices for internet access is viewed as price gouging; and COVID-19 considerations are making business class air and insurance, that provides coverage for coronavirus-related problems, a cruise must. Another is paying separately for excursions, especially if this is the only way of leaving the ship in some ports.

It might be said that Regent predicted these shifts in attitude when it raised the bar a few years ago on what “all-inclusive” includes. It started to include business class air, shore excursions, a hotel the night before each cruise begins, and internet in the basic cruise fare. This was a tremendous gamble for Regent, as it raised their baseline prices 20-50% above their competitors. However, it also became a point of pride for guests: “I can afford to buy the very best.”

This permitted Regent to establish another ship category, which I’ll call uber-luxury ships. These include in the minimum fares business class air, free excursions, free internet, a hotel stays the night before the cruise, and access to all dining venues without additional fees. About the only necessity which isn’t yet included in the price yet is travel insurance covering all medical events, including COVID-19.

Until this week, Regent Seven Seas ships are the only vessels with more than 300 guests that can be called uber-luxury vessels, because every guest enjoys these benefits. However, Silversea (now owned by Royal Caribbean) is about to join them, at least for many cruises in their newest promotion. Further, they are doing it for prices that lay waste to Regent’s prices.

Here’s a comparison of two cruises that leave Japan on repositioning cruises to Alaska and Canada, within a month of each other. Many ships spend winter and spring in Asia or Australia, and go to Alaska or the Med for summer and fall. Because these ships must make these crossings which require 2-3 week at sea, they are avoided by most vacationers, but beloved by seasoned travelers who enjoy seadays and the bargain prices.

Let’s look at the features and costs of the Silversea and Regent cruises. Decide for yourself the possible impact if Silversea extends if the new pricing model becomes a Silversea staple on all their cruises.

The Silversea Silver Shadow leaves Yokohama (Tokyo) for Seward, on May 24, 2022. It’s a 16-night cruise that visits five ports in Japan, one port in Siberia, and four ports in Alaska. It has six sea days. Since the cruise includes an overnight in Yokohama and a night in a hotel before the cruise begins, you have three days and two nights to explore Tokyo and Yokahama. The cruise ends in Seward, but you can stay on the ship for another week to explore the Alaskan panhandle and end the extended cruise in Vancouver.

The Seven Seas Explorer leaves Yokohama (Tokyo) for Vancouver on April 25, 2022. It’s an 18-night cruise that visits three ports in Japan, one port in Siberia, six ports in Alaska, and ends in Canada. It has seven seadays. Since the cruise also includes a night in a Yokohama or Tokyo hotel before the cruise, you can spend a two days and one night exploring Tokyo and Yokohama.

The Silver Shadow has been awarded 4+ stars from Berlitz Cruising & Cruise Ships. It has been in service since 2000, but was refitted in 2018. It carries 388 guests. It has three restaurants, including one that’s French and managed by the Relais et Chateaux group that manages some of the world’s finest restaurants. Unfortunately, dining in this restaurant is still an extra-cost item. The ship is known for its Italian cuisine and fine cheeses which abound in the main restaurant. The ship also has an extensive art collection that decorates the ship, and typically carries a renowned artist-in-residence on each voyage. It’s also known for some of the best speakers afloat.

The Seven Seas Explorer also has 4+ stars from Berlitz Cruising & Cruise Ships. It has been in service since 2016 and carries 750 guests. Because of the pandemic, it’s almost a new ship. It has five restaurants, including a steakhouse and a restaurant specializing in Pacific Rim cuisine. It too has an extensive art collection that used to decorate the ship.

The Silver Shadow offers free Economy Class Air. Business Class for this voyage is only $998 extra roundtrip. This is about $3,000 less than the usual price, and we’ve built Business Class air into our estimated price. Transfers from the airport to the Tokyo hotel, from the hotel to the ship, and from the ship to the Anchorage airport by a wilderness railway are built into the fare.

The Seven Seas Explorer includes free Business Class air for every guest. Transfers from the airport to the Tokyo hotel, from the hotel to the ship, and from the ship to the Vancouver airport are built into the fare.

Both cruises offer a good mix of free and extra-cost excursions in every port. The selections won’t be fleshed out until six months before sailing. Some of the best excursions may have to be booked privately if the ships don’t offer them. These include an early-morning visit to the Tokyo fish auction, where large tuna sometime goes for over $100,000. After the auction, enjoy a sushi breakfast along with many of the buyers. Another “must” is a visit to a sumo stable, where the 200-350-pound wrestlers work out, and a floatplane ride in Alaska for sightseeing or bear watching—that includes a seafood lunch with crabs and salmon that have just been caught.

The only extra which has substantial cost on both cruises is travel insurance with coverage for any disease, including COVID-19. The extended coverage should cover medical expenses, quarantine costs, and trip interruption or cancellation. This insurance will probably add 9-12% to the cost of the trip, depending on the guests’ ages and which company’s policies you buy.

Both of these cruises are fantastic. My wife and I have done the Japan to Alaska cruise three times, and have done it in both directions. We prefer the May cruises from Tokyo, since is permits time in Japan when the cherry blossoms are on the trees and cover the ground like a carpet.

It’s likely that with a 30% cost advantage, the Silver Shadow will sellout within a matter of weeks. If this occurs on many of the cruises that provide uber-luxury features, Silversea might well convert all of its cruises to this price model and become the second uber-luxury cruise line.

What About Seabourn and Crystal?

*Editor’s Note of Correction: This article originally included that the Seven Seas Explorer was $300 more than the Silver Shadow a night. This has been corrected to $200 for factual accuracy.

Dr. Steve Frankel and his wife have sailed on most of the Seabourn, Silversea, Crystal, Azamara, Oceania, Regent, and Windstar ships on more than 40 cruises. For the past year, he writes a weekly column, Point-to-Point, for Travel Research Online (TRO) that’s read more than 80,000 travel advisors and industry leaders. Steve is the founder of Cruises & Cameras Travel Services and a Signature Select Travel Expert. Steve also provides writing and consulting services. He specializes in small-ship cruises and COVID-19 mitigation strategies. Steve has a doctorate in Educational Research and Marketing from Indiana University. He is one of the first travel advisors in the nation to earn a certificate in Epidemiology in Public Health Practice from Johns Hopkins University. Before his involvement in the travel industry, Dr. Frankel was the director of several organizations specializing in public policy studies. He’s the author of 13 books and a former Contributing Editor of The Washingtonian magazine. His email address is Steve@CruisesAndCameras.com, and he welcomes suggestions and inquiries about what he writes. He usually will reply within 24 hours.

Share your thoughts on “The Rise of Uber-Luxury Ships”