Posted on April 14th, 2021 by Steven Frankel in Point-to-Point

The Centers for Disease Control is pondering an offer from the Norwegian Cruise Line that may avoid months of haggling. If the CDC accepts the deal, the other two members of “Big Three,” Carnival and Royal Caribbean, will likely go along; lest they lose the rights to sail this summer from American ports. Norwegian Cruise Line’s offer to CDC Is:

Permit Norwegian Cruise Line to begin cruises on all of our ships by the Fourth of July, and we will require that everyone on board (including crew members and children) be fully vaccinated two weeks before each cruise begins.

Norwegian Cruise Line Holdings (NCLH) consists of three cruise lines. The only one that usually sails from American ports—making their health and safety provisions fall under the Center for Disease Control’s authority—is the Norwegian Cruise Line. It features large resort ships that cater to American families. NCLH’s other two lines, Oceania and Regent, seldom sail from American ports (except for their very lucrative Alaskan cruises) and cater to affluent seniors. 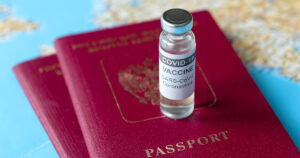 Only the Norwegian Cruise Line needs to worry about not permitting unvaccinated children to sail. Since it looks like children 12 years or older may be vaccinated later this spring, most vaxed middle school students and those in high school may be permitted to cruise. Many elementary school students will start school in early August, preventing many from going on cruises this summer anyway.

If NCLH doesn’t make a deal with the CDC by summer, its only options may be to lose out on summer cruising entirely or have their cruises leave from foreign ports that aren’t under the CDC’s jurisdiction.

One of their competitors, Royal Caribbean Cruise Lines (RCCL), has been moving ships from American ports at a breakneck pace. RCCL owns Royal Caribbean, Celebrity, and Silversea. They are already sailing from Singapore and Saudi Arabia, and they have announced summer cruises from Bermuda, the Bahamas, Cyprus, Greece, Israel, and the UK.

NCLH’s other competitor is Carnival Cruise Lines (CCL) which owns Carnival, Cunard, Holland America, Princess, and Seabourn. They threatened last week to move their ships offshore if they’re not allowed to start cruising from US ports soon. Carnival is particularly critical to the American cruise industry since it has homeports in Alaska, California, Florida, Louisiana, Maryland, Mississippi, New York, Texas, and Washington. If these cruise ports close, it may be seriously cripple tourism in these areas for years.

“While we have not made plans to move Carnival Cruise Line ships outside of our US homeports, we may have no choice but to do so to resume our operations which have been on ‘pause’ for over a year.”

Congress may respond to threats to move ships offshore if they result in job losses. A “tit for tat” response could be taxing the foreign corporations that own the “Big Three” at domestic tax rates for the earnings generated in the United States. This is already being openly discussed.

Congress could permit states to collect sales taxes on travel sales, just as they made Amazon collect sales taxes on nearly all merchandise. Particularly in states with cruise ports, this may seem like poetic justice. Perhaps this is why Royal Caribbean is one of the few cruise lines to announce specific offshore arrangements.

Norwegian Cruise Line’s offer is well-timed. It may be the only chance the cruise lines and the feds have to reach a compromise before more extreme measures start.

More importantly, it’s not a bad deal. Norwegian Cruise Line already has made the most politically risky decisions by not permitting COVID tests instead of vaxes, and requiring that children be vaccinated regardless of age. Had the CDC done either of these things, the furor could have lasted for years.

There is tremendous value if cruise ships ensure that everyone on board is vaccinated. Under the NCLH offer no one can remain unvaccinated, except those who have recently recovered from COVID-19. These provisions will benefit public health all over the world by helping to prevent coronavirus outbreaks from spreading to other nations.

However, a few things need to be determined by the CDC before this arrangement can be finalized:

If the answer to all these questions is ‘Yes’, this “Pretty Good Deal” becomes a “Great Deal.” If the trial period is successful, the provisions should become regulations that will apply to all ships under the CDC’s jurisdiction.

Surveys have shown that about 70% of the seniors who cruise have already received at least one shot. That means within a month, this group will probably achieve herd immunity. But younger cruisers—particularly on the resort ships—have a way to go. This can be one of the most effective ways of incentivizing more of them to get vaccinated this spring or summer.

The “cherry on top” will be if the CDC permits early signers of the trial agreement to start Alaskan cruises in May, and also permit Caribbean cruises from American cruise ports at the same time. This will require Congressional permission or an Executive Act due to other legislation, but it would be a tangible benefit for cruise lines that want to be “early adopters.”

Having cruises that start almost immediately can motivate thousands of travel advisors to contact their best clients to make them aware of these opportunities. Since the cruises could get underway in a month, this would put cash in advisors’ pockets nearly right away. Most important, it will save lives by motivating younger cruisers to get vaccinated. It can also save the economies of cruise ports in Florida, along the gulf coast, and in Alaska.

Many thanks should be given to NCLH for proposing this elegant solution to one of greatest problems in restoring cruising to its former glory.