Posted on April 2nd, 2021 by Ralph Grizzle in Deck Plans

We love it when we’re right (and wish it were more often). In last week’s post, we suggested that additional cruise restarts would be announced before the end of the month. And no sooner than those words were released into the digital sphere that we got word that Royal Caribbean would be sailing from Bermuda. This is a first for Royal Caribbean. By home-porting outside the United States, big ship cruise companies are finding ways to circumvent—or outright avoid—CDC requirements that are attempting to stall cruising’s restart. Crystal, Celebrity and Royal Caribbean had already announced cruises from home ports in the Bahamas and St. Maarten. Bermuda is the newest twist, and we think it’s a good one. 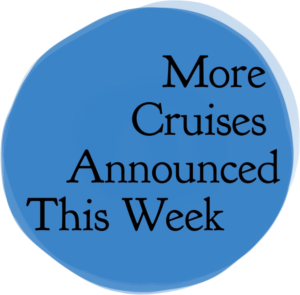 Beginning in June and running through August, Royal Caribbean’s Vision of the Seas will offer seven-night cruises from Bermuda to the Bahamas. Royal Caribbean is requiring that guests are fully vaccinated.

Alaska is open too, but only to small ships. Small-ship operator UnCruise notes on its website: “We are sailing in Alaska this summer. We are not affected by the Canada big ship ban.”

This morning, Lindblad let us know that they will be cruising both Alaska and the Galapagos. Did we not say the Galapagos would be one of the first destinations to come back for cruises? Yes, we did. Can you tell we’re feeling giddy? We’re excited about cruises resuming safely, restoring the livelihoods of hundreds of thousands of people who rely on cruise tourism to make a living. The Galapagos, in particular, is in dire need of tourism dollars.

Across the Atlantic, Celebrity Cruises is returning to cruising in Europe on June 19 with the new Celebrity Apex operating seven-night sailings roundtrip from Athens through September 2021. The cruises are open to North Americans.

Royal Caribbean’s Jewel of the Seas will offer all-new 7-night cruises departing from Limassol, Cyprus. Starting July 10, the ship will call Cyprus home for the first time and sail to the picturesque shores and ancient ruins in Cyprus, Greece and the Greek Isles through October. Travelers can visit a combination of culture-rich cities and idyllic islands, including Limassol, Athens, Greece and the Greek islands of Rhodes, Crete, Mykonos and Santorini.

We applaud these developments and a return to some semblance of normal. Be sure to check out cruises that have already resumed in the United States. See this post, Live From The Mississippi: First Impressions Of American Countess & Cruising’s New Protocols.