What’s in a Name? Travel Advisor, Counselor, Agent, or Champion?

Posted on August 18th, 2021 by David Cogswell in The Incessant Traveler

“A rose by any other name would smell as sweet,” said Juliet Capulet, according to William Shakespeare. Times change, names change. Peking became Beijing. We got used to it. It doesn’t really matter.

Now travel agents are known as travel advisors. Or travel advisers, depending on what you are reading. The reason for the change in nomenclature was, of course, to break from the past and emphasize that travel retailers don’t just turn over tickets for airlines. There was a time when it was possible to make a good living just selling airline tickets. But that time is long past. Though, I don’t think it was ever a large percentage of the whole. But, in any case, that was a long time ago. No one has done that for decades. 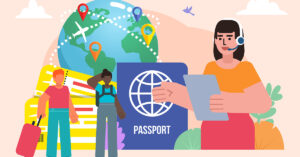 What travel retailers sell is primarily knowledge, knowledge of a field that is constantly changing, and one in which not having the best information could make the difference of hundreds or thousands of dollars; and, in some cases—not to be morbid—life or death.

I’ve heard of plenty cases in which people turned up at a resort and found that the reservations they had made, and paid for, were not honored. In some cases the reservations were never made at all. The client had been swindled by a thief posing as a tour operator.

In other cases, a tour operator may have suddenly crashed, gone bankrupt, and couldn’t pay their vendors; so the reservation wasn’t honored. In some cases, it’s the hotel that went out of business. Or maybe, it was just a mistake that someone made. Those are the times when you’d better hope you have a good travel advisor to turn to for help.

When you show up in a foreign country, tired from traveling and have no hotel room to stay in, you could suddenly become a homeless person for the night. And in some places, having no place to stay can be dangerous. So, when I say it is sometimes a matter of life and death, it’s not hyperbole.

Finding you have no reservation is only one of countless ways that people can be hurt by not having good travel information and guidance. They range from minor inconvenience to serious disaster. When there is a terrorist act, or a natural disaster, having bad information can cause serious hardship or put you in real danger.

So, the advice of a good travel advisor is golden. That’s why “travel advisor” is a good term, one that honors the profession appropriately. “Travel counselor” works for me too. Certainly, we are not talking about mere ticket vendors.

But when I am talking about the people who sell travel to the public, the travel retailers, I often find that the term “agent” still comes out of my mouth. Maybe it’s just habit, but I think it’s more than that. To me the term agent never meant a mere ticket vendor, someone who just passively ch-chings the cash register and hands you a plane ticket. I still like the word agent. James Bond was an agent, though admittedly a secret one. I like the word agent because, to me, it signifies action, decisiveness. To me, the travel advisor is a champion of the people, looking out for their clients’ best interests.

Yes, information is the main stock in trade of the travel agent. But it’s not just static, neutral information, as in data that runs through a computer. It’s information in the hands of a competent professional, whose job is to provide clients with the best possible trip for their needs—whether it’s business or pleasure. It’s one who has the judgment to make the right choices from the information available, and to take the most advantageous action.

To get clients there and back safely, comfortably and efficiently, that’s the basic root requirement. But, upon that foundation, the sky is the limit. The best travel professionals can facilitate a trip of a lifetime; a transcendent, life-changing, mind-altering experience. And if necessary, they can get people out of a bad jam.

It’s all that. And it is based on information, advice, on knowing what is needed to fulfill the task at hand. It is based on being on top of the most current information of the moment in a dynamic, constantly changing field of activity, as well as years of experience working in that ever-changing, mercurial business environment. The advice of the advisor has value based on information, as well as experience. It’s advice, and it’s counseling, so the terms travel advisor or travel counselor both fit. But there is another component that is highly important, and that is action.

When I think of my travel agent, or the best agents I know, I think of action. I know that if I get stuck at an airport and my flight is canceled, or overbooked, or maybe I made a mistake, whatever it is, I can call my agent and he will go into action and find a solution to my problem in short order. I know because I’ve had it happen enough times to know.

So, to me, that element of action is highly important, and the word agent carries that connotation. A quick Google search for the definition of agent turns up this:

And yes, there is James Bond, the secret agent with the license to kill. Now that was a guy you know you could count on in a pinch, a guy who gets things done.

So, I hope the term travel agent is not verboten, or taboo. I hope if it slips out of my mouth, I will only be seen as an old-fashioned blunderer, but that it will not be seen as offensive.

Ticket vendors are ticket vendors. Professionals who arrange travel plans and itineraries, and make them happen, are not ticket vendors. You could call them many things: retailers, professionals, advisors, counselors, and maybe… sometimes (?) you could still call them agents. They are still that to me: people who make things happen, professionals who stand up for you, and look out for you when you’re in the field traveling. That field is sometimes a battlefield, and you need a competent, strong person to be your agent.

There are many kinds of agents, literary agents, booking agents, and talent agents. To me, there’s nothing undignified about the term. It does not connote a passive ticket seller. It’s highly respectable in my book. If I say travel agent, I am using a term of highest respect based on the many times my travel agent has been my champion in times of distress.

So I hope, if I occasionally use that term, it won’t be seen as offensive. Somehow I don’t think travel champion is going to make it.

Share your thoughts on “What’s in a Name? Travel Advisor, Counselor, Agent, or Champion?”