Posted on September 16th, 2021 by David Cogswell in The Incessant Traveler

There are many ways to look at Cuba. From a strictly-business point of view, it’s a sad story. There’s never been any question that there has been huge pent-up demand by Americans to travel to Cuba. After more than half a century of being prohibited by their own government from traveling to what used to be considered one of the hottest vacation destinations in the world, of course there is demand. It’s 90 miles from Florida, a heavenly tropical Caribbean destination. But for practical purposes it’s blackened off the tourist map.

There’s never been any situation that compares to it. Americans can travel pretty much anywhere. Americans are not dictated to by their government as to where they can travel. They can travel to America’s Cold War nemeses, Russia and China, even to Vietnam. But not Cuba. 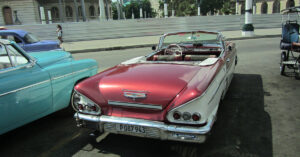 Actually, it’s not true that Americans can’t travel to Cuba. They can, but it is highly restricted. For those who really want to, there are ways. But it has been difficult and troublesome, and the marketplace has been so riddled with confusion from constantly changing restrictions and political posturing, that it has frustrated attempts to build an industry in that market. And many have tried.

The governmental restrictions are designed to make travel to Cuba difficult and unattractive, because the US remains essentially in a state of low-grade war with Cuba—after more than 50 years. The American government maintains a harsh embargo on Cuba, keeping the tiny nation essentially in a prolonged state of siege.

So, in spite of massive demand, and a great deal of work by many people to build a tourism industry in Cuba, the attempt remains pretty much dead in the water. And there’s no sign of change on the horizon.

When President Obama announced in January 2015 that commercial airlines would be allowed to fly into Cuba again, it was the first time American carriers had flown there since 1962. Eventually, there were five American airlines flying to Cuba.

President Trump promised to “cancel” Obama’s opening of Cuba. He didn’t quite do that, but he did levy more restrictions that made the regulatory framework more difficult again. He cut out individual travel, but left group travel in place, with more restrictions on accommodations.

But the public perception was that Trump had shut down travel to Cuba again. And with the resulting drop in demand, that perception more or less became reality. The fledgling Cuba travel industry just petered out. The big players backed out, and it returned in many ways to what it had been like before the opening of individual travel in 2016.

The shutting down of the market hurt a lot of businesses, including giants of Corporate America, such as airlines, cruise lines and hotel companies, who had to pull up stakes and leave when the tougher restrictions under Trump made the market not worth the trouble and the risk.

In terms of basic business, just plain old dollars and cents, Cuba has been a huge potential market for the travel industry for decades. But it is blocked off by the government. And it seems a situation that could remain stuck in perpetuity, even though it only serves the interests of a small minority of Americans. It is a state of gridlock based on the piled-up policies of generations of politicians playing with Cuba as a political football, as one little chess piece on a whole world map of trouble.

In the business world, travel to Cuba was never a partisan issue. There are just as many Republicans as Democrats who have wanted to do business there. Airlines, cruise lines, and hotel companies are Republican as much as Democrat.

But the business interests are overridden by the political interests, many of which seem to be little more than 50-year old inertia.

When Biden was elected president, it was for some hope of a loosening of restrictions on travel to Cuba. That had been the pattern historically. Democrats opened it, Republicans closed it.

It was a Democrat, Bill Clinton, who initiated the opening of travel to Cuba with the People to People program in 2000. American tour operators started to venture in, in spite of gnarly regulations that made it possible for major companies like Amex to get caught up and have to pay expensive and embarrassing fines over some mistaken lapse of compliance with the regulations of the Office of Foreign Assets Management.

In 2003, Bush pulled back on People to People, and the industry went into hibernation, waiting hopefully for another opening. Then Obama opened up travel and trade to Cuba beyond anything seen since the 1960s. It was an opening big enough to allow US airlines and cruise lines, as well as more tour operators than ever, to start building businesses there.

For those hoping for an opening again under a Democratic president, unfortunately, the reverse has happened. Because of highly publicized political protests in Cuba, anger and outrage against the Cuban government blew up; and it became a hot political issue again. So, Biden actually added more restrictions. Again, they aren’t enough to have a major effect on your trip there. But it’s not likely any of the big players in Corporate America are going to want to invest in that market again for a long time.

Sadly, the business potential is being restrained not by business issues, but by regulatory issues. In the business community, there is no divide. There’s no anti-Cuba contingency in the business world. You either want to do business there or you don’t. That’s business. But politics is something else. And on that side of things, there are reasons, too difficult for almost anyone to sort out and untangle at this point, going back decade after decade of being determined by whatever was politically advantageous at the time to whatever politicians were pulling the strings.

Interestingly enough, it was not actually Bill Clinton who started People to People. It was a Republican president, Dwight D. Eisenhower, in the 1950s.

General Eisenhower had led the Allied Invasion of Europe to topple the Nazis. He was one of the first outsiders to see the Nazi extermination camps. His horror of war ran deeper than most of us could ever comprehend. He was deeply committed to preventing another war.

Eisenhower believed that the ordinary citizens of the world wanted peace, even when their leaders wanted war. He believed that more contact between the ordinary citizens of different countries would help maintain good relations and help avert another worldwide conflagration, such as the one he had helped bring to a conclusion. With that objective, he set up the People to People initiative in 1956. At that time, the target country was the USSR, Soviet Russia.

“If we are going to take advantage of the assumption that all people want peace,” he said in a speech, “then the problem is for people to get together and to leap governments—if necessary to evade governments—to work out not one method but thousands of methods by which people can gradually learn a little bit more of each other.”

Of course, the issue of Covid has trumped everything. Cuba has been closed off by its own government in recent times because of quarantine. So, all the other issues have been moot for a while. But now the Cuban government has signaled that it’s going to open its doors to tourism again this fall. So, it will become possible again for Americans to visit Cuba under the regulatory framework of People to People.

Some of the tour operators who have been dedicated to providing travel to Cuba in the past are ready to get rolling again, and have tours slated. So travel to Cuba will likely remain what it has been, a very rarified and special experience for the few people who see through all the fog and confusion and understand that travel to Cuba is really one of the great travel experiences available to an American today. The very fact that it has been restricted for so long enhances its value as a magical, exotic, and forbidden world. And there is much to learn by going to a place that has experienced an absence of Americans for 50 years.

I recommend Cuba to every American.

What’s in a Name? Travel Advisor, Counselor, Agent, or Champion?
“A rose by any other name would smell as sweet,” said Juliet Capulet, according to William Shakespeare. Times change, names change. Peking became Beijing. We got used to it. It doesn’t really matter. Bombay is now Mumbai. Canton is now Guangzhou. Saigon is Ho Chi Minh City. St. Petersburg became Petrograd, then Leningrad, and now…
It Matters Who You Travel With
I noticed recently that Expedia is using the slogan, “It matters who you travel with.” I found that to be a curious choice for the mega online travel agency. I agree with the statement wholeheartedly, but applying it to Expedia is a mismatch. It would be appropriate if you applied the slogan to the American…
The Great Release is Here: Are You Ready?
After a year of being pent up, the Great Release is upon us, and now it seems sudden. Things are opening faster than predicted just a few months ago. In March 2020, the COVID pandemic submerged us in the exponential growth of new infections and, before we could comprehend what was happening, we were virtually…