Posted on October 15th, 2021 by Ralph Grizzle in Deck Plans

“I listen to my body, and my body says no to the vaccine.” I was standing at Amsterdam’s Rembrandt Square, dipping fries into a dab of mayonnaise (patat met) when a fellow standing next to me said, “Eet smakelijk,” which I understood to mean enjoy the fries. I thanked him and said that I hoped he enjoyed the apple that he was gnawing on. Thank you, he replied in English, before adding: “I’ve just finished a march and cannot find my car. Luckily, I know people here and someone is coming to help me.”

I learned that he was from Arnhem, about 90 minutes away, and that he had come to the Dutch capital to protest against the vaccines and the QR codes that restaurants and bars now require patrons to show before entering. The QR codes demonstrate proof of vaccination.

“It’s not fair,” he said. “I have grandchildren. I don’t want them to be vaccinated until we know the long-term effects of the vaccines.” He feels shackled by the QR codes, living in a stratified society where there are those who can now enjoy pre-pandemic life in the Netherlands, going to restaurants and bars, for example, and those who cannot. No QR code, no entry into the pre-Covid world.

For the American visitor, however, all of Amsterdam seems to exist in a carefree world with little regard for Covid transmission. Though I had only been in Amsterdam for the afternoon, having arrived from Atlanta, what I observed was an ocean of differences in our responses to Covid-19. 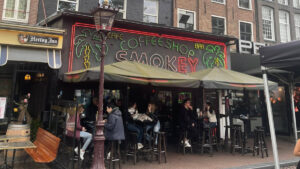 It started with my flight over, where I noticed that the KLM flight attendants were wearing surgical masks, with gaping vents at their cheeks. I asked about the surgical masks, to which the KLM flight attendant replied: “The company says we’re safe with these. It’s all we need. And we needn’t wear them once we’re outside the airport.” She shrugged in resignation, as if to express a lack of confidence in the company’s guidance. Contrast that to my Delta flight from Asheville to Atlanta, where the flight attendants had worn KN95 masks.

What has struck me about Amsterdam so far is the absence of masks. Checking into the Waldorf-Astoria Amsterdam, I was surprised to be greeted with maskless staff. It felt both refreshing (I had arrived in a world where masks were no longer needed – had Covid been vanquished?) and at the same time alarming. I was breathing other people’s air.

In late September, the Dutch government dropped nearly all mask mandates, except on public transport. Social-distancing here also is more relaxed than in most parts of the world, 1.5 meters (just shy of five feet) rather than 2 meters.

It was only last month that fully vaccinated travelers from very high risk countries (such as the United States) were required to quarantine for up to 10 days. The Dutch government flip-flopped on that ruling, reversing the quarantine requirement only two weeks later, likely because of the impact it was having on the tourism economy. It’s hard to keep up with the rules.

Standing outside the Waldorf-Astoria, Patrick, who had earlier delivered my luggage to my room, gave the impression that the pandemic had ended. He said it was good to have tourists back and that the hotel was beginning to see better occupancies (70 percent over the weekend, he said).

Maybe the Netherlands has the right idea. I was reluctant to drop my mask, but one thing was clear: In Amsterdam, I am clearly in the minority. Though I suspect I have seen a few hundred people during my afternoon walk through Amsterdam, I saw perhaps only half a dozen who were masked. Feeling confident after having been vaccinated and boosted, I decided to drop my mask too. It feels refreshing.

I realize that by coming here I am the canary in a coal mine. Others have traveled here with me. We are the pioneers to a return to normal. But it’s not yet normal. This afternoon I boarded Crystal Debussy. Before doing so, however, I had to show a negative Covid test. Crystal provided the testing and fast results, and thankfully, my results were negative. If I can continue to show negative results, including the one before flying back to the United States, this canary in a coal mine will be signaling the way ahead for others who long to river cruise in Europe.

As I approach Crystal Debussy, a staff member greets me, masked, as are all staff on the ship. Moreover, all staff and guests are required to have been fully vaccinated and tested. I have a QR code to show my negative results. My friend from Arnhem would not approve, but it certainly makes me feel more comfortable to be back on a river cruise that feels a lot like it did before Covid collapsed the world. 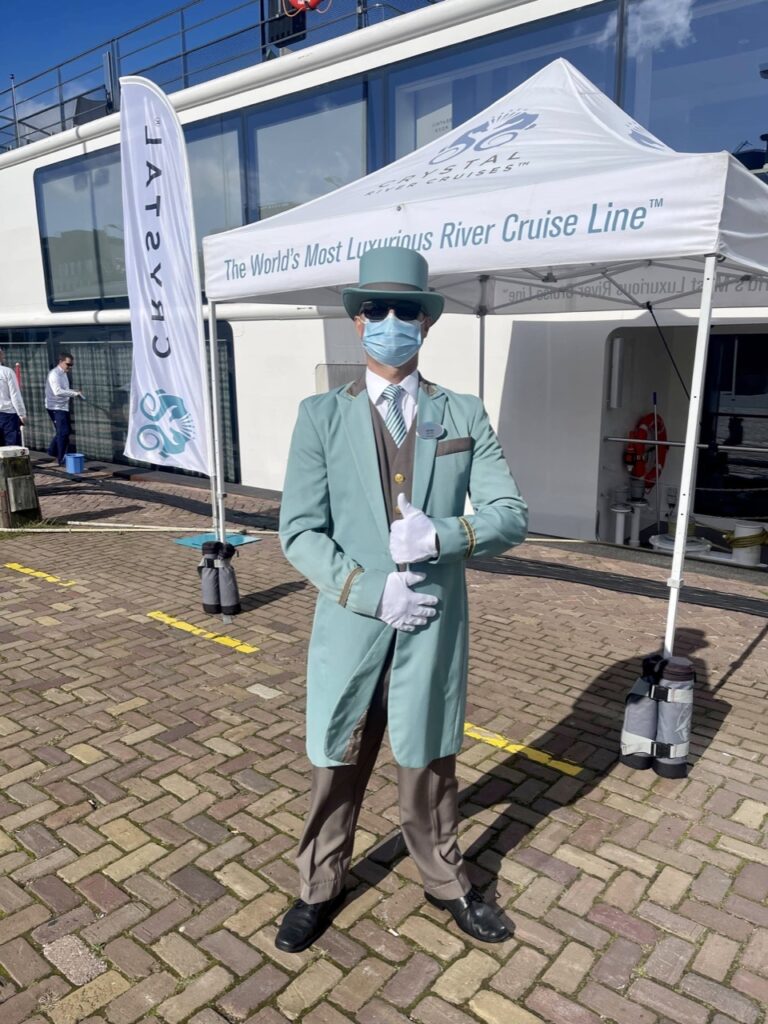 Share your thoughts on “Exploring The Pre-Pandemic World Before Boarding Crystal Debussy: Welcome To Amsterdam”