I Cruised Crystal Debussy In October. Was This The Same Crystal That We Knew & Loved Before The Pandemic? What Changed & Why. | TravelResearchOnline

I Cruised Crystal Debussy In October. Was This The Same Crystal That We Knew & Loved Before The Pandemic? What Changed & Why.

Posted on October 29th, 2021 by Ralph Grizzle in Deck Plans

Before boarding Crystal Debussy in early October, I wondered if this would be the same Crystal River Cruises that I had experienced two years ago. In October of 2019, I cruised Crystal Bach on the very same itinerary on which I was about to embark: an 11-day voyage on the Rhine and Moselle rivers.

That cruise two years ago had been so good that I wanted to show others the beauty of the Moselle with a river cruise company that caters to guests who demand the best, and so I set out to put together a group sailing. More than two dozen people signed up to travel with me in the fall of 2020. Because of the pandemic, our cruise was pushed forward to October of 2021 – and even that timeline seemed dubious. 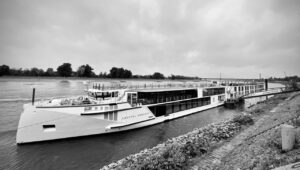 Twenty people canceled as the Delta variant made headlines throughout the United States in late summer. Crystal made good on prompt full refunds.

Seven us – the intrepid seven – were determined to soldier on. We were all set until early September, when the Netherlands mandated 10-day quarantines for all U.S. arrivals, vaccinated or not. Huh? That sent river cruise companies operating out of Amsterdam on a scramble.

Crystal’s plan was to have us all fly in on the day that Debussy would depart – basically, we’d need to get the hell out of Holland, using a transit loophole that gave us 12 hours to land and be on our way out of the country.

Thankfully, the Netherlands rescinded its ill-conceived quarantine requirement two weeks after its inception. And so it was that I found myself in Amsterdam on October 3, in a place that, much to my surprise, very much seemed like the pandemic had ended – or had never happened in the first place.

Hardly anyone wore masks, bars, restaurants and coffee shops (the ones that don’t sell coffee) were bustling. The city felt a lot like the one I had visited many times in the past. It was surreal. A global pandemic was raging, and yet, it was party time in Amsterdam. See my story Exploring The Pre-Pandemic World Before Boarding Crystal Debussy: Welcome To Amsterdam.

Embarkation Was Not The Same As Before, Thankfully

On my cruise two years ago, Crystal had set a high bar, and naturally I was curious to find out if the pandemic had forced the company to cut corners. Before stepping aboard, I asked myself: Would the food quality have suffered due to cost-cutting? Would service be as exemplary as it had been on Bach? Would the champagne be poured as freely? And what about that caviar? Would they still be dishing that out?

The wake of the global pandemic had created turbulence for all cruise companies, whether operating on the oceans or rivers, and Crystal, because it was in an aggressive expansion phase, was particularly hard hit.

One significant difference that I noted between this cruise and my last one on Crystal: Before boarding Debussy, all guests were given antigen tests, free of charge, at Hotel Jakarta. Crystal had set up a reception area with delicious pastries, coffee, water and other refreshments. We filled out a form attesting to things like we had not had Covid symptoms or been knowingly exposed to someone who had Covid. Then we went for our antigen tests, which were being conducted in another room. The test was quick and thorough – I have never had a swab pushed so deeply into my nasal cavity. Fifteen minutes later, I had my results: negative.

From Hotel Jakarta, we boarded a bus for a five-minute transit to Debussy. Kudos to Crystal for providing the tests. Everyone who I spoke with later during our cruise appreciated knowing that they had boarded a ship where all were fully vaccinated and had shown negative test results for Covid.

As an extra protective measure, Debussy’s staff were required to wear masks, but guests were not. On the first day, I saw a few people reluctant to remove their masks, but by the second day, we were all maskless. That felt liberating, to say the least.

Debussy’s Hotel Director, Johannes Lackner, told me that there had not been a single case of Covid on Crystal’s river vessels. He attributed the clean bill of health to Crystal Clean+, a series of protocols that the company put in place to protect the health of guests and crew.

In addition to the mask requirement, crew abides by curfews that keep them clear of high-risk venues ashore, such as restaurants or bars after their shifts.

Yes, It Was The Crystal We Loved Pre-Pandemic

Spoiler Alert: All that had changed on Crystal from my cruise two years ago were the health protocols. Aside from the staff wearing surgical masks, my 11 days on board Debussy was consistent with the pre-pandemic Crystal that I had known and loved.

After stepping aboard, I still received a warm welcome and a glass of champagne. I was escorted to my room, where two packets of surgical masks (I never opened them) and two bottles of hand sanitizer sat on the desk of my 253-square-foot deluxe suite. For those of you who are curious, below is a short iPhone video of Suite 301.

The photos below further answer the question posed at the beginning of this post. And I wasn’t alone in thinking that Crystal presented a travel experience that is about as good as it gets. Here’s how three couples who traveled with me summed up their time on Crystal Debussy.

“I would characterize Crystal as a luxury cruise line without pretension,” said Caren Helms, traveling with her husband Ron. “Everything about the ship and the crew is top-tier, the food is delicious, the service impeccable and the atmosphere casual and welcoming.”

“We can’t stop talking about the cruise,” said Ed Dennerlein, who traveled with his wife Carol. “This cruise on Crystal was the best of the best. The wonderful service that we got from the crew at every part of the ship from our butler to the waitstaff to the bartenders to the front desk was extraordinary. Overall, we have to rate Crystal number one.”

“The included excursions were first rate as were the guides that we had,” said David Weymouth, traveling with his wife Susan. “Normally we would have skipped perhaps half of the planned tours and just struck out on our own, but the quality of the first couple of included excursions kept us coming back for more. I especially liked the chance to take a second tour one afternoon, which gave me the opportunity to join a few others for a steep scramble up to a castle for a spectacular view of the Moselle, our riverboat and the cute town of Bernkastel. We even got included beer while resting at the castle.”

Share your thoughts on “I Cruised Crystal Debussy In October. Was This The Same Crystal That We Knew & Loved Before The Pandemic? What Changed & Why.”