Posted on October 27th, 2021 by Cheryl Rosen in The Rosen Report

It’s a traveler’s dream vacation, and a travel advisor’s dream commission—even a sign of hope that one day soon the world will be open and the seas free to roam.

So, of course, Royal Caribbean’s announcement of its first-ever world cruise, the longest in the industry at 274 nights, made some headlines this past week. And for some travel advisors, it actually did get clients calling.

While some said it was too long (especially for customers with pets) and some said it was too expensive for the traditional RCCL cruiser, Royal Caribbean SVP Vicki Freed said that in just the first couple of days “hundreds of bookings have been created” as “people are moving their ‘bucket list’ trips into their ‘to do list’” and travel advisors tell me that indeed some categories are almost sold out.

The “Ultimate World Cruise,” sailing round-trip Miami on the mid-sized Serenade of the Seas beginning December 10, 2023, is broken down into four legs that can be booked separately for those who aren’t quite ready to spend the full nine months at sea. It covers 150 destinations in 65 countries, with prices from $61,000 for an interior room to $112,000 for a junior suite. 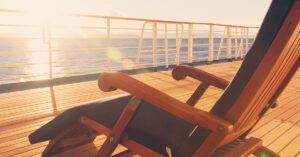 The first day is at CocoCay; by New Year’s Eve guests are in Rio, then South America, and on to California during the first leg. Leg 2 heads to Hawaii, Polynesia, Australia, Bali, and the Phillipines, then on to Asia, to China, Japan, Korea, Vietnam, Sri Lanka, India, Abu Dhabi and Dubai. From there, Leg 3 includes more Middle East and then Greece, Turkey, Bulgaria; by May it is in Croatia, France, and Spain. The final leg, beginning July 10, encompasses Spain, Morocco, Portugal, Ireland, France, Belgium, Denmark, Germany, Russia, Sweden, Denmark, Norway, Iceland, New York and Bermuda, then returns to Miami September 10.

Travel advisor reactions range from skeptical to excited. Some saw the extra 100 days as a plus for travelers longing to see the world at a leisurely pace; some noted the price point is higher than more upscale competitors that include more amenities. Many marveled at a customer base that might include couples who can afford $232,000.

And still, the industry is abuzz. “I was talking to clients about it last night,” says Mona Schaefer. “They will probably get a lot of Pinnacle members, but I don’t think they will attract new clients—and they certainly won’t draw from Regent, Holland America or Princess, all of which have those extended sailings. I think it would have been a better sell on Celebrity. We were taking a look, but Regent is at a similar price point and they are all balconies and legitimately all inclusive.”

Still, said Cathy Udovch at Travelstore, interest in world cruises has been growing, as Freed pointed out. Before the RCCL announcement, she recently sold two: one on Princess that was not a big surprise, and one on Cunard that she never would have expected. And while her regular Royal Caribbean clients “aren’t really World Cruisers, that’s because the option never existed before. Having experience with World Cruisers and HAL Grand Voyage cruisers, I’ll give it a go,” she says. “The itinerary is looking really cool.”

Tom Baker at CruiseCenter in Houston is less sure. “History tells me they repeat menus every week onboard, so I see a huge challenge for diners looking for variety,” he said. And yet, “I am supposing Royal Caribbean did its homework on this, as it is a massive venture on a mass market class ship. My travelers prefer a more upscale experience for such long voyages, but I do wish Royal Caribbean great success.”

Christina Ernst of VIP Travel, meanwhile, was surprised and thrilled to get a Facebook post from a client last week asking her to look into it for his 50th birthday celebration. Just two days after the cruise was announced, all the suites already were sold out, and while “rates were not too bad,” there were not many perks for guests who were not Crown & Anchor members, which he is not.

Still, he is considering doing a leg or two.

Share your thoughts on “RCCL Leaps Into World Cruising”