Why I Don’t Ride Elephants | TravelResearchOnline

Why I Don’t Ride Elephants

Posted on October 21st, 2021 by David Cogswell in The Incessant Traveler

When I was in India I took an elephant ride. It’s an attraction that is offered tourists in countries such as India, Thailand, Vietnam, and Indonesia. The elephants were decoratively adorned with colorful weavings. I sat over the shoulders and rocked with the movement as the elephant walked up a hillside toward a temple. It was a thrill to be on the back of such a big, wonderful animal that was generously allowing me to ride on his back. I felt gratitude and friendship for the gentle giant.

I admit, I didn’t give it a lot of thought. It was just a few moments of one day on a 10-day tour. I took the ride, enjoyed it, and then moved on to the next thing on my itinerary. Then one day I met Stephanie Shaw, the corporate liaison for People for the Ethical Treatment of Animals (PETA), and I realized what should have been obvious to me in the first place. Of course. Why did I ever think that an elephant would work a day job carrying humans around on his back constantly of his own free will, hour after hour, day after day?

When I learned the story behind the elephant rides, I felt ashamed of myself for being so insensitive to the animal. I was sorry for having participated in it, for helping to perpetuate the practice of selling elephant rides, which requires a kind of captivity and treatment I can hardly bear to imagine.

I assume others who take the rides are like I was. They saw the elephant ride attraction and went on it, not thinking that much about how it came to be that the world’s largest land animal would be submitting itself to serving as a taxi at a tourist attraction. 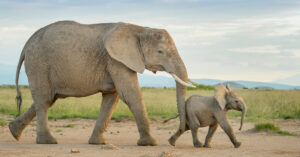 But once I learned about how that all comes to be, I could never again participate in it. We have domestic animals, cats and dogs, that have had symbiotic relationships with human beings for thousands of years. An elephant is not a domestic animal.

According to Stephanie Shaw, “Every elephant that is forced to give rides in the tourism trade is regularly beaten, bound with ropes or shackles, worked to exhaustion and controlled under constant threat of punishment with weapons such as bull hooks, which are sharp steel-tipped rods that resemble fireplace pokers.”

Elephants are not only physically prodigious animals, possessing massive power in their bodies, they are also highly intelligent and social animals. It’s cruel to seize them from their natural environments, from their families and force them into lives of servitude.

“To force elephants to give rides, trainers use extreme psychological and physical punishment,” said Shaw. “In Asia, baby elephants are trained through a process call phajaan, which literally means ‘divorcing the love.’

“The entire process is designed to break animals’ minds, bodies, and spirits. Trainers take still-nursing baby elephants forcibly away from their mothers, immobilize them and then gouge them with nails or other sharp objects. At times, they’ll wave flaming sticks in their faces. These ritualized training sessions that last days, or sometimes weeks, leave elephants severely injured and traumatized.”

The working elephants are subjected to the constant threat of physical punishment and violence. According to reports, as many as half of the elephants that are subject to phajaan die during the process.

PETA has made it its mission to communicate with tour operators and persuade them to drop the elephant rides from their itineraries. Most travelers would not want to participate, if they understood the cruelty the animals are subjected to. The same is true of tour operators. Once they understand how elephant training works, getting them to drop it from their itineraries is what Stephanie Shaw calls “an easy sell.”

“It hasn’t been a contentious issue,” said Shaw. “I work with a lot of issues affecting animals in entertainment, and some conversations are easier than others. But nearly every executive I’ve been on the phone with discussing this issue is compassionate and understands that offering elephant rides is condoning animal abuse.”

As a result of PETA’s efforts, many tour operators have dropped elephant rides from their itineraries.

After learning about the background of my tourist experience that day I was filled with remorse for having participated in it in the first place. I thought of that poor elephant, and how that half-hour experience for me was just one part of an endlessly repeating scenario for that elephant, day in and day out, carrying humans up the hill toward the temple.

It was little comfort to recall that I had tried to express kindness to the elephant in my encounter with it. I spoke to it and stroked its shoulders affectionately as I rode. I hope the elephant felt some human kindness from me. I tried to relate to it as a sentient being, not some sort of mechanical conveyance.

There are good ways to encounter elephants. I never cared much for zoos, though some have improved a lot during my lifetime so they are more humane. But I don’t like to see animals taken from the wild and confined in cages. There is one way to encounter elephants that is really satisfying and you can do it with a clear conscience, without fear of having harmed the animals.

I’m talking about safaris. I have been on many safaris in Africa. I’ve had many opportunities to see elephants in the wild, and even to interact with them at close range. Those are very rewarding experiences, and I have no regret about my participation in those activities. They are operated with great sensitivity and caring for the wildlife, not interfering with their natural ways of life.

Those I recommend heartily. In fact for me, the experience of seeing the great animals of Africa in their natural environments changed of my world view fundamentally. Looking back, I feel that my experience seeing those great animals in the wilderness was really the beginning of my mature understanding of the world. I felt that I had never really understood civilization until I experienced the world outside of civilization.

Before I went on safari, all the animals I saw were packaged, either in some zoo enclosure or circus, or captured within the frame of a documentary film. When I saw animals in the wild, not being interfered with by human beings, it seemed to be the first time I ever experienced real life in the real world.

So I heartily recommend going on safari and seeing the animals in their natural habitats. That’s the way to see animals. But please don’t go riding on their backs. The pleasure you get from it is not worth the cruelty to the animals.

Cuba: Hope Springs Eternal
There are many ways to look at Cuba. From a strictly-business point of view, it’s a sad story. There’s never been any question that there has been huge pent-up demand by Americans to travel to Cuba. After more than half a century of being prohibited by their own government from traveling to what used to…
What’s in a Name? Travel Advisor, Counselor, Agent, or Champion?
“A rose by any other name would smell as sweet,” said Juliet Capulet, according to William Shakespeare. Times change, names change. Peking became Beijing. We got used to it. It doesn’t really matter. Bombay is now Mumbai. Canton is now Guangzhou. Saigon is Ho Chi Minh City. St. Petersburg became Petrograd, then Leningrad, and now…
It Matters Who You Travel With
I noticed recently that Expedia is using the slogan, “It matters who you travel with.” I found that to be a curious choice for the mega online travel agency. I agree with the statement wholeheartedly, but applying it to Expedia is a mismatch. It would be appropriate if you applied the slogan to the American…

Share your thoughts on “Why I Don’t Ride Elephants”