First Flight in the Age of Covid | TravelResearchOnline

First Flight in the Age of Covid

Posted on November 4th, 2021 by David Cogswell in The Incessant Traveler

Funny how things change. “Check in” used to mean you had arrived at the airport and were ready to fly. It told the airline you had gotten to the airport on time and hadn’t got stuck in a traffic jam and missed the flight. But now you can check in online the day before your flight. The airline doesn’t know if you have made it to the airport until you have boarded. Or if you check a bag. This time I checked a bag. Later I wished I had gate-checked it.

My flight from Newark to Kansas City was my first in nearly two years. I used to fly about once a month. Since the onset of Covid layoff it’s been a long time of not setting foot in an airport. It was wild to plunge back into the madness. I forgot how mad it is.

I had planned to use Uber to get to the airport, but the app on my phone wasn’t working. It needed an update to even function. And time was fleeting. I updated the app, but then it wouldn’t take my credit card. My account showed an old expiration date, and it wouldn’t let me update the information. “You already have this card on file,” it commanded. “Try another one.” I didn’t want to use another one. But I did. You can’t argue with an app. 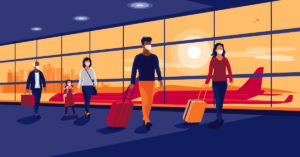 Uber informed me that the driver would arrive in three minutes. The cost from Hoboken to Newark Airport was $65. It’s usually $35, but Uber jacked up the price because it was a busy time. I paid the $65 and then noticed that the time of arrival had changed from 3 minutes to 12 minutes. I was already standing outside, where I had rushed to catch the driver in three minutes. Damn! That Uber is a mercurial little beast. I think I’m going to go back to my old limo service. The price is $35 and it doesn’t change when it’s busy.

The Uber driver was masked and had a sheet of clear plastic hanging between the driver seat and the passenger seat, giving an impression of hygiene, except that there was a hole in the plastic big enough to throw a basketball through. The driver was playing some percussive South Asian music, singing along with it and bouncing around.

Traffic was bad, but once we got out of Hoboken it smoothed out. The mass of traffic was heading into New York, back to back, barely moving. But headed toward Newark Airport we zipped along nicely. I made it to the airport one hour before take-off. I thought that would be an adequate pre-flight time. But it wasn’t.

I had booked on United. The Uber driver managed to claw his way through crowded cars and triple parked in front of the terminal long enough for me to hurry out and haul my bags through the cars to the curb. It had been so long since I had flown I wasn’t sure I knew the drill. I had checked in online, so I could have walked directly to the gate and used the boarding pass on my phone. But I was checking a bag.

Once inside, I saw signs saying “Step 1: tag your bag” over banks of computer terminals with lines that snaked around in no particular direction. Other lines were moving faster, so I scooted over to one of them.

In about 15 minutes, I made it to an unoccupied terminal. It asked for my confirmation number, which I didn’t remember offhand, but I remembered my frequent flyer number and that got me to my flight record. The thing churned and rattled and spit out a baggage tag. It asked me if I wanted a printed boarding pass, and I said yes, even though I had it on my phone. It felt good to have the paper.

Then I moved to where you drop off bags. There was no line and the attendant was friendly and helpful. Next stop was the security check point, always a favorite part of any trip. The security checkpoint had a platform for loading bins parallel to a conveyor belt to push them onto when they were filled. New bins were shot at you under the loading platform.

The attendant told me to put the laptop in a separate bin. I hurried to make sure the second bin would be next to the first and not mixed in with someone else’s stuff. Then I turned toward the people scanner. The attendant instructed me to take off my shoes. It had been so long since I flew that I had forgotten about taking off your shoes. Some clown once tried to put a bomb in his shoes, so forever after millions of flyers have to remove their shoes to board an aircraft in America, though not in most other countries.

I slipped off my shoes, handed them back to the woman at the conveyor belt, then turned and entered the human scanner. The attendant instructed me to pull up my pants, and I complied, not knowing why. I had purposely not worn a belt so there would be one less thing to remove at security. I raised my arms above my head, emulating the life-size figure in front of me, assuming the proper pose of submission, or is it self defense? The scanner swept around me and I was approved. Then he released me.

Then, I was ready to board. I followed the signs toward gate 97, at the far end of one of the long wings of the terminal. When I got there, the small Embraer jet was boarding. I found my seat, the woman in the next seat got up to let me in, commenting on the close quarters. It was certainly a cozy little compartment. Masks were required over mouth and nose. Some were complying, some were cheating. When boarding was complete the seats across the aisle were still empty, so my neighbor moved into one of them, giving us both some extra room.

I had grabbed a sandwich in the airport to avoid having to eat airline “food” but, being so tightly packed, I didn’t feel like removing my mask to eat. When the flight attendant brought biscuits and drinks, I ate the biscuits, pulling my mask aside for each bite, then putting it back in place while I chewed. My neighbor across the aisle was doing the same thing. A voice over the loudspeaker told us to make sure our air vents were open wide for maximum ventilation. I happily remembered reading that ceiling-to-floor ventilation in planes is one of the most effective kinds of ventilation for blowing away viruses.

When I arrived in Kansas City, I discovered that my checked bag hadn’t made it onto the aircraft. That was the drawback of arriving only one hour before flight time. The baggage claim attendant tracked my bag to Chicago. He said it would arrive in Kansas City that night and would go out the next morning for delivery by 11:30 a.m. It finally arrived at 5 p.m. with a loud knock on the door. The driver was on the offensive and complained that she’d been calling me all day. “Really?” I asked, “What number?”

“This one,” she said, pointing to one of two numbers on her reference form, the one marked “H” for “home.” I asked why she didn’t try the one marked “C”. for “cell,” since I was obviously traveling. But I had my bag, finally, and that’s all I cared about. I could shave, change clothes.

After being grounded for so long, it was a pretty good experience. A few rough spots, but not bad. If you haven’t flown for a long time, it may be a bit of a shock at first plunge. Prepare yourself to be immersed in madness. But hey! What fun would life be without a little madness?

What’s in a Name? Travel Advisor, Counselor, Agent, or Champion?
“A rose by any other name would smell as sweet,” said Juliet Capulet, according to William Shakespeare. Times change, names change. Peking became Beijing. We got used to it. It doesn’t really matter. Bombay is now Mumbai. Canton is now Guangzhou. Saigon is Ho Chi Minh City. St. Petersburg became Petrograd, then Leningrad, and now…
Cuba: Hope Springs Eternal
There are many ways to look at Cuba. From a strictly-business point of view, it’s a sad story. There’s never been any question that there has been huge pent-up demand by Americans to travel to Cuba. After more than half a century of being prohibited by their own government from traveling to what used to…
Why I Don’t Ride Elephants
When I was in India I took an elephant ride. It’s an attraction that is offered tourists in countries such as India, Thailand, Vietnam, and Indonesia. The elephants were decoratively adorned with colorful weavings. I sat over the shoulders and rocked with the movement as the elephant walked up a hillside toward a temple. It…

Share your thoughts on “First Flight in the Age of Covid”