Posted on November 18th, 2021 by David Cogswell in The Incessant Traveler

While Covid laid waste restaurants, entertainment and tourism businesses, it didn’t hurt Netflix any. Netflix gained 8 million subscribers in 2020. And you don’t need market research to know that people spent a lot more time watching screens in 2020 than in 2019.

Long before the passenger jet industry made global travel easy and accessible, movies were already established as one of the best ways to travel if you couldn’t leave your hometown. Travel scenes have always been a large part of the appeal of movies. And movies are great vehicles for promotion of places where they are set.

Even if the movie does not feature iconic scenes in Paris, New York, Rio or the African bush, it takes you somewhere besides where your physical body is presently seated. We traveled virtually in movies long before anyone used the word “virtual” the way we do now. During 2020 and the Covid pandemic, most people all over the world were restrained from doing much real travel. And once again, movies stepped in to help soothe the restless heart. 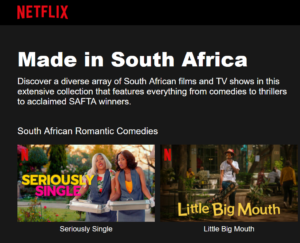 The ever-enterprising and resourceful folks at South African Tourism seized on the novel opportunities that came along with the pandemic calamity and formed a partnership with Netflix to present the Made in South Africa content collection, a showcase of more than 80 South African films, series, documentaries and TV shows from South Africa. The collection is accessible to Netflix’s 209-million subscribers from 190 countries. It allows people who can’t travel internationally to travel to South Africa via cinema. It promotes South Africa by showing people the culture as portrayed in the movies.

The collection was launched after Netflix presented results from the Cultural Affinity Study at a panel session hosted by SA Tourism at the Africa’s Travel & Tourism Summit, held in Johannesburg and Durban on Sept. 21. The study asked questions about South African films such as My Octopus Teacher, Blood & Water, JIVA!, How to Ruin Christmas: The Wedding, Trippin’ with the Kandasamys, I Am All Girls, Queen Sono, Kings of Joburg, Santana, Riding with Sugar, and Seriously Single.

The survey showed that people who watched those movies were more motivated to visit South Africa, and that South African content is a force that can drive tourism. The chief marketing officer of South African Tourism, Mzilikazi Themba Khumalo, said that the partnership with Netflix would build the soft power base for South Africa and the continent, and export the African way of life. “It is so the world can perceive the way we are talented, young and fresh, and export the whole tapestry from a cultural standpoint.”

To a country used to overcoming barriers, the Covid pandemic became a challenge in which to find and utilize opportunities. “We saw that as an opportunity to enhance South Africa’s communications to the world as storytelling in the long form,” said Khumalo.

Viewers of the films will probably have some surprises. For most people, becoming acquainted with South African culture is initially a big surprise. It explodes far beyond the bounds of the preconceptions that most people carry about the place before they have had the actual experience of being there.

And within Africa, no place is farther than South Africa from the simplistic imaginings of Africa one may have gained through popular culture or news coverage. It stubbornly refuses to fit into any categories. That’s what makes the country such an outstanding place to visit. It destroys preconceptions faster than practically any place I can think of.

If a picture is worth a thousand words, a movie is worth billions of words. This series of movies can show a lot about South Africa from many angles and views.

You might wonder how much a series like Kings of Joburg, which portrays a lethal underground crime world in Johannesburg, is likely to attract tourists. It’s a good question, but all big cities have crime, and it’s an open question whether a fictional show like Miami Vice attracted more people to Miami than it repelled. Kings of Joburg is a fictional crime series, but along the way it shows much of the glamour of Johannesburg and its highly evolved culture and economy. These aspects of South Africa would come as a surprise to most who are unfamiliar with the country.

For me, South Africa is the first country to come to mind when someone asks for recommendations. If one were to have only one trip available, for many people I would recommend South Africa. We all have different preferences, but based on the things people travel for, for fun, beauty, or experiencing new things, I think South Africa gives more bang for the buck than almost anywhere.

As an American, when I discovered South Africa, I was transfixed by the strong similarities with my own country, alongside striking differences. It was like looking into a mirror and seeing one’s own face, but somehow different, backwards in some ways—under the surface essentially kin.

For me it was music that brought South Africa into focus. Once I saw that South Africa had its own versions of jazz, rhythm and blues, and rock and roll—similar to ours, but different—I was hooked. I wanted to get under the surface and find out where this brethren culture came from.

As I looked at the similarities, they just stacked up. New Amsterdam was founded by the Dutch West India Company in 1625. Cape Town was founded a few years later in 1652 by the Dutch East India Company. Both colonies were taken over by the British. New Amsterdam became New York. Both countries developed tenuous racial relations based on using cheap or free labor to fuel economic booms, with cotton in America and gold in South Africa.

With our consciousness of racial issues in America building to a head in recent years, South Africa seems more instructive than ever. The popularity of South Africa’s Trevor Noah on The Daily Show is in part based on his own charm and talent, but also on the fact that as a South African who grew up under apartheid, he has many insights to offer an American audience.

South Africa’s way of resolving its racial issues is an inspiring example for us as Americans. Of course, there’s no perfect resolution in South Africa, and can’t be in America. But South Africa, under the charismatic and inspirational leader Nelson Mandela, gives us something to shoot for.

Mandela, who was imprisoned for 27 years in an attempt to stifle the liberation movement, had as much reason for rage and revenge as anyone. But he chose a path of reconciliation and unity. His vision of a Rainbow Nation where diversity was prized and appreciated as an engine of progress and prosperity made it possible for South Africa to move from the bitter apartheid era into a peaceful multi-racial democracy.

I spoke to many in South Africa about their own experiences, including men who were young, angry Black men during the days of apartheid. They convinced me that Mandela, by the strength of his personal stature, turned the tide on what would likely have been a bloody revolution.

Mandela’s speech in court as he was being convicted and taken to prison set the objective for the country to strive for, and for him to be released to realize 27 years later. It gives me chills to read.

“I have dedicated my life to this struggle of the African people. I have fought against white domination, and I have fought against black domination. I have cherished the ideal of a democratic and free society in which all persons will live together in harmony and with equal opportunities. It is an ideal for which I hope to live for and to see realized. But, My Lord, if it needs to be, it is an ideal for which I am prepared to die.”

South Africa has the Big Five wildlife. You can experience the true African wilderness, but it also has a first-world infrastructure, modern cities and highways, world class entertainment, diverse culture, a 350-year old wine district, English, and the unique recent political and cultural history that makes it so special to Americans at this juncture of history.

In a world teeming with political upheaval and unrest, South Africa is one of few places where political events have moved in the direction of positive principles such as freedom, equality, tolerance, diversity, justice and prosperity.

Only 30 years ago, the majority of South Africans could not vote, and did not have the rights of citizenship. The majority labored under a harsh yoke of repression. Now when you travel to South Africa you experience a nation unleashed, exploding with the joy of freedom and a recognition of the full rights of every person. It’s a heady experience.

If it’s your last trip ever, I promise it will be a good one. And, while you are waiting to take the trip, you can immerse yourself cinematically via Netflix’s Made in South Africa collection.

What’s in a Name? Travel Advisor, Counselor, Agent, or Champion?
“A rose by any other name would smell as sweet,” said Juliet Capulet, according to William Shakespeare. Times change, names change. Peking became Beijing. We got used to it. It doesn’t really matter. Bombay is now Mumbai. Canton is now Guangzhou. Saigon is Ho Chi Minh City. St. Petersburg became Petrograd, then Leningrad, and now…
It Matters Who You Travel With
I noticed recently that Expedia is using the slogan, “It matters who you travel with.” I found that to be a curious choice for the mega online travel agency. I agree with the statement wholeheartedly, but applying it to Expedia is a mismatch. It would be appropriate if you applied the slogan to the American…
Cuba: Hope Springs Eternal
There are many ways to look at Cuba. From a strictly-business point of view, it’s a sad story. There’s never been any question that there has been huge pent-up demand by Americans to travel to Cuba. After more than half a century of being prohibited by their own government from traveling to what used to…

Share your thoughts on “Visiting South Africa via Cinema”