Posted on February 14th, 2022 by Mike Marchev in Mike's Monday Cup of Mo-Joe

I guess you could safely say that flying was embedded in my DNA. My grandfather was the President of Republic Aviation and was responsible for building the P47 Thunderbolt. My dad flew in World War II, and my Uncle Al also flew single-engine airplanes. It only seemed natural to earn my private pilot’s license back in 1983.

Today’s story involves a near land-based catastrophe. It was colder than expected the morning when my Uncle Al and I were going to satisfy our urge to take to the skies over Morristown, New Jersey. The sun was shining brightly when we arrived at the airport but the overnight cool air lingered, which made it difficult to start the single-engine.

Rather than jeopardize the remaining juice in the battery, Uncle Al unbuckled his seat belt, stepped down from the aircraft, and walked to the front of the plane to manually spin the propeller. This was a proven method to “work the oil” into the ignition system thereby making the prop easier to turn over once the battery kicked in again. 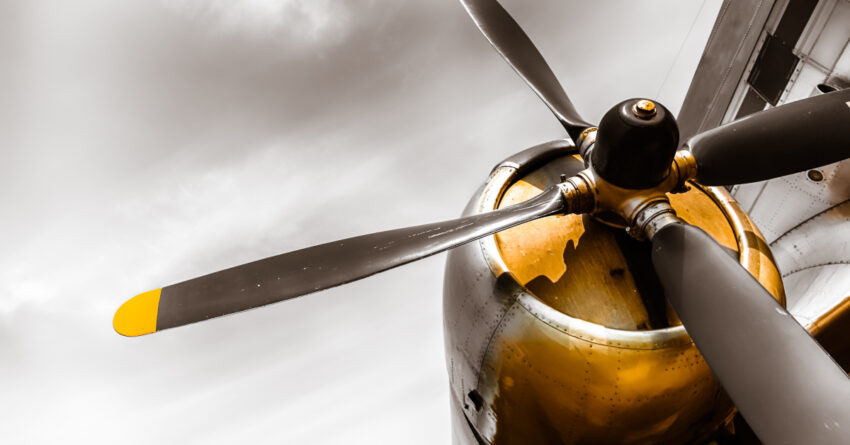 To ensure the prop didn’t “jump-start” on its own, it was imperative to have both magnetos in the “off” position.

Before initiating his first spin of this potential guillotine, my Uncle made a point to ask me if both magnetos were in the off position. I looked down, and from my angle, both appeared to be off. I relayed this information by giving him the “thumbs up” sign… with both thumbs.

He grabbed a prop blade with both hands and gave it a spin. This reminded me of the way Pat Sajak gives The Wheel of Fortune a final spin with both hands at the end of his show during the BONUS Round. Not expecting the engine to start, the exercise was simply to get the fluids moving more freely in the cold weather. “Magnetos off?” he asked again. I repeated my signal, but this time gave him the three-ring A-OK sign. He grabbed. He spun.

That is when Al’s training and experience might have just saved his life. He heard a “click” which was the signal for him to dive quickly away from a spinning airplane propellor. Al was fortunate enough to know what that tell-tale sound preceded. He had heard it before. The prop threw out a plume of smoke before beginning to spin. Al returned to his feet, climbed back into the Cessna 172, and took his position in the left seat.

As cool as a cucumber he said, “I thought you told me both magnetos were off.” “Al, I am so sorry,” I said. “My angle from the right seat indicated they both appeared to be in the off position.” We taxied to runway 320 and that was pretty much the end of that near-fatal chapter of Marchev’s Last Flight.

When your next action or decision is important, and perhaps even life-threatening, make sure you know what you are talking about. Check. Double-check. Check from a different angle. Get into a different position and check again. By changing your angle, you often times change your view.

I am sure to make a few more judgement errors in my life, but I can guarantee one thing. I will never confuse the current position of an airplane’s magneto switches ever again.

Welcome to The Class of ’71: My Notre Dame Story
I was a senior in high school in 1967. It was a Friday afternoon when Mr. Zuckerman, my guidance counselor, informed me it was time to present my credentials to a number of colleges in the hope one would grant me admission. At the time, high school graduates had two choices: Attend college or get fitted for army fatigues before being shipped out to Vietnam. In most cases, this choice was considered a “no-brainer.” The problem was, I had not given it any thought up until that Friday afternoon. Mr.…
Take More Shots!
A former National Hockey League All-Star, Wayne Gretzky has been given credit for the phrase, “You miss 100% of the shot’s you don’t take.” This reminder, in and of itself, is quite logical. But if these nine words are not obvious enough, there are more ways to drive home this valuable message. Using golf as the source: “Never up. Never In.” All putts fail if they do not reach the hole. Sales: If you don’t ask, you don’t get. Tom Peters: “In order to strike oil you have to dig…
Do More—Get More
It often amuses me how things come to be. Some favorable outcomes appear to fall right out of the sky without warning or merit. This, however, is more often the exception. Most positive outcomes are the result of some form of action. In other words, we are all basically responsible for our futures. As the ear-torn saying reminds us, “If it is to be, it is up to me.” I remember the phone call. My good friend and speaking competitor shared his exciting memories from a recent European river cruise…