Posted on March 30th, 2022 by Steven Frankel in Point-to-Point

As a veteran of more than 40 international cruises, I used to turn up my nose whenever someone suggested that I sail from domestic ports. The only exceptions I ever made were a cruise to Iceland from New York City; a repositioning cruise to Japan that left from Seattle; one to South America that departed from Los Angeles; and two from Miami that sailed to Europe.

I reasoned that, if I was going to kill a night flying from LAX to a departure port and have an after-dinner drink and a Zolpidem tablet after dessert, I could just as easily wake up in Europe, Asia, or Australia as on the east coast of the US. Honestly, you don’t notice the difference—especially if you fly Business or Premium Economy.

After having two international jaunts canceled last year, and considering the possibility of the military crises in Europe broadening before I could sail again, I rethought these views. I booked a Fall Foliage Cruise from NYC to New England, Nova Scotia, Quebec, and Montreal for a client and us. It’s only 12 nights, but with overnight stays in NYC and Montreal, the trip will be nearly the same length as the canceled cruises. 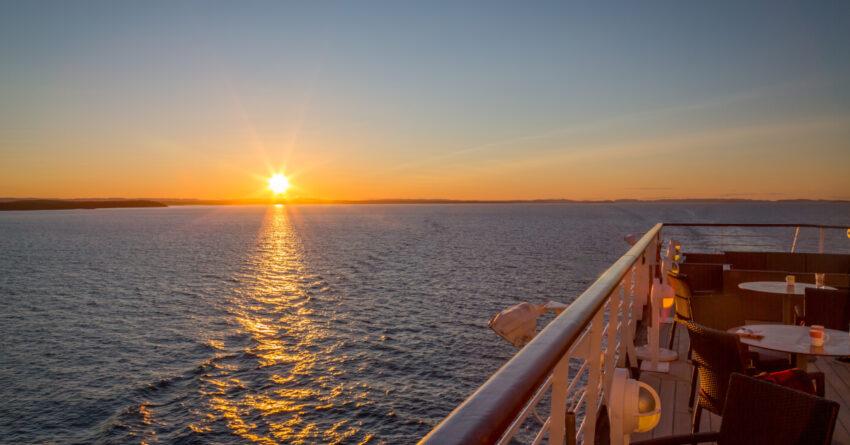 Since we’re traveling on the Seabourn Quest and spending much of the cruise in the French-speaking area of Canada, the food should be as good as on Asian, European, or Australian cruises. Also, we’ll enjoy lobster dinners ashore for the price of a mediocre restaurant meal in Los Angeles.

Not every cruise leaving US ports will be as good as sailing from far-off locations. We have qualms about sailing to the Caribbean in hurricane season or getting packed in with lots of kids on tours in Alaska.

But we also welcome the opportunities offered by the new coastal catamarans owned by American Cruise Lines, with a dozen ships scheduled to start cruising with 109 guests and 50 crew next year. These ships will be able to explore paradises such as the Chesapeake Bay and Puget Sound, which have been, until now, mostly accessible to those who own or can charter an entire vessel.

It may be a long time until Americans return to St. Petersburg, and some—if tensions rise further—might hesitate to take river cruises in Eastern Europe, or visit Hong Kong or Shanghai. Travel advisors should prepare for these eventualities. One of the best ways to do this is to recommend that even die-hard cruisers consider voyages that begin and end in US ports, and suggest that their favorite cruise lines make coastal cruises more widely available.

Enabling Experienced Small Ship Cruise Advisors to Restructure Their Businesses
The picture isn’t bright for travel advisors selling small luxury cruises on brands such as Regent, Seabourn, Crystal, Silversea, Viking Ocean, Oceania, Ponant, and Windstar. Most haven’t seen a decent payday in the past two years. Many have gone into debt trying to keep the doors open by spending countless unpaid hours processing cancellations, rebooking, and trying to attract new clients when they have little to sell. The cruise industry sages predicted that Asia, Australia, New Zealand, South America, and Canada would open to cruise ships carrying fewer than 1300…
Two Disruptions for the Cruise Industry
When the curtain comes down on the 2022-2023 cruise season, the two most influential cruises lines for the rest of the decade may be Azamara and American Cruise Lines. Azamara has been leading the charge towards port-intensive cruising, and American Cruise Lines is introducing a dozen new ships that may change cruising forever. Azamara’s Port-Intensive Cruising Experiences Even when owned by Royal Caribbean, what set Azamara apart from the other premium ship brands was its emphasis on what it called “port-intensive cruising.” This means scheduling one or more overnight stops…