How to Cruise the Baltic Now that St. Petersburg Is Off-Limits | Travel Research Online

How to Cruise the Baltic Now that St. Petersburg Is Off-Limits

Posted on March 11th, 2022 by Steven Frankel in Point-to-Point

The Cuban seizures were legal under international law, if equitable financial compensation is paid. Yet, every American President and Congress has kept the cruising embargo in place because of failure to compensate the injured parties. As reported in Hotel Hotline, the latest glitch that’s prolonging the cruising embargo is a lawsuit by the heirs of Meyer Lanksy, saying they too deserve compensation. The Bay of Pigs debacle also fueled enthusiasm to keep the embargo in place.

With this backdrop of more than 60 years of retribution, let’s look ahead to what may be in store for the Russian government now that their invasions of Ukraine have already created close to two- million refugees and thousands of deaths. In the two weeks since the invasion started, airline, cruise line, credit card, banking, fuel and trade embargos, and visa restrictions have been imposed by many governments and major corporations and will likely to remain in place for many years. 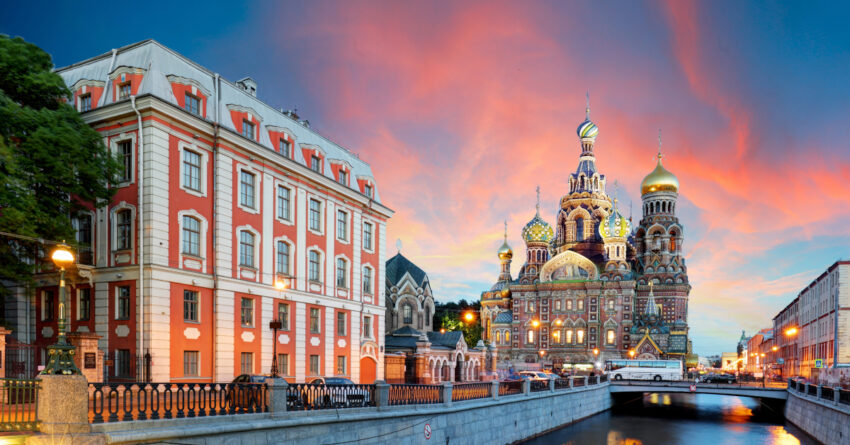 The crown jewels of St. Petersburg, such as the State Hermitage Museum, the Savior on the Spilled Blood, and the Peterhof, will probably be seen as early examples of Russian state-sponsored oppression. Without millions of visitors each year, these show pieces of art and history will become a drain on the Russian government. The buildings will likely fall into disrepair and the finest examples of Russian art may be “lent” to oligarchs or sold on the black market.

When it comes to cruising and travel, the US Department of State released the following guidance a few weeks ago, putting the country at level 4:

“Do not travel to Russia due to ongoing tension along the border with Ukraine, the potential for harassment against US citizens, the embassy’s limited ability to assist US citizens in Russia, COVID-19 and related entry restrictions, terrorism, harassment by Russian government security officials, and the arbitrary enforcement of local law.”

All the major cruise lines have also joined the chorus. The last one to fall in step was Royal Caribbean which, on March 1, issued the following statement:

The safety of our guests and crew is always our top priority. We are continuously monitoring events taking place around the world, including the situation in Ukraine. With the recent events, we have made the decision to cancel our visits to St. Petersburg, Russia on all Summer 2022 itineraries. We have planned alternative ports and will communicate itinerary changes to our guests and travel partners.

The other two major cruise lines, Norwegian and Carnival, had issued similar statements at least a week before RCCL. These pronouncements were widely anticipated. What if one or more of the cruises vessels were “arrested” along with the crew and passengers? Or, what if one was sunk or suffered a suspicious accident while in Russian waters?

“Remember the Maine” was the pretext used by the media to start the Spanish-American War. Who says that attacking a cruise ship with primarily American and European citizens onboard couldn’t evoke a similar reaction? Given the publicity over one basketball player with cannabis oil in her bag being stopped at the Moscow Airport has provoked national concern, imagine if the incident involved 9,000 passengers and crew and a billion-dollar ship?

It’s hard to see any solution to restore tourism to Russia in less than a decade. People will not forgive more than 2 million people becoming refugees and being shot at. Russia has become an outlaw state. It’s hard to imagine any scenario in which St. Petersburg becomes a place capable of attracting large numbers of tourists.

Two Suggestions for Cruise Lines Seeking to Offset the Loss of St. Petersburg on Baltic Cruises

1. Substitute a 1-2 night overnight stay in Warnemunde (Rostok, Germany) for an overnight of the same length in St. Petersburg.

If you haven’t been on a Baltic cruise, this may seem like an absurd suggestion. But if you’ve been there, you know that Warnemunde is the hidden gem of many Baltic itineraries. It’s an Instagram-worthy medieval college town that includes canals with dozens of restaurants on small boats docked along walkways with their kitchens in building only a few steps away. There’s lots of music, laughter, and inexpensive German food. You’ll probably end up eating ashore each day that your ship is in port.

Just as important, Warnemunde is the gateway to Berlin, only two hours away by autobahn or train. While Berlin has been a “must-see” city since the fall of the Berlin Wall. It’s also known as the place which some say there is the hottest nightlife in Europe. It’s easy to arrange a 1–2-night tour that provides transportation, sightseeing, and a hotel room—either on your own or through a cruise ship. Many cruisers, especially those who are history buffs or looking for exciting nightlife, will enjoy this much more than the museums and palaces in St. Petersburg.

Until now, the problem has been fitting 4-hours of travel, sightseeing, and Berlin’s nightlife into a single-day port stop. The cruise lines can take care of this problem by extending the time in Warnemunde to 2-3 days.

Another port worthy of a 1-2-night stay in Stockholm, especially if the Stockholm stop coincides with one of its many festivals. An example is the start of a Tall Ships Race. The one I attended attracted more than 100,000 visitors and it culminated with our ship sailing along with the racers to the start of the race. Another alternative is taking a day cruise by ferry north through the Swedish Archipelago to Aland. These are 11-hour cruises offered mornings, afternoons, and nights. The night cruise is sometimes called the “Love Boat Cruise” since couples on some boats can have private cabins.If you choose to overnight in Stockholm and stay on the ship, you will be only five minutes away from Stockholm’s “Old City.” Here you can eat at the oldest restaurant in Europe, sample the offerings of some of Europe’s most innovative shops, and enjoy the camaraderie in which might be Europe’s friendliest large city. Since Swedish children start studying English in the second grade, communication with adults is seldom a problem.

Better yet, some ships can adopt both ideas by offering one-night overnight stays in both ports. This is in keeping with Azamara’s marketing that focuses on providing at least one overnight stay a week on most of their cruises. Other lines might also want to give itineraries like these a try as a means of making up for the loss of a 1-2-night stop in St. Petersburg.

Enabling Experienced Small Ship Cruise Advisors to Restructure Their Businesses
The picture isn’t bright for travel advisors selling small luxury cruises on brands such as Regent, Seabourn, Crystal, Silversea, Viking Ocean, Oceania, Ponant, and Windstar. Most haven’t seen a decent payday in the past two years. Many have gone into debt trying to keep the doors open by spending countless unpaid hours processing cancellations, rebooking, and trying to attract new clients when they have little to sell. The cruise industry sages predicted that Asia, Australia, New Zealand, South America, and Canada would open to cruise ships carrying fewer than 1300…
Two Disruptions for the Cruise Industry
When the curtain comes down on the 2022-2023 cruise season, the two most influential cruises lines for the rest of the decade may be Azamara and American Cruise Lines. Azamara has been leading the charge towards port-intensive cruising, and American Cruise Lines is introducing a dozen new ships that may change cruising forever. Azamara’s Port-Intensive Cruising Experiences Even when owned by Royal Caribbean, what set Azamara apart from the other premium ship brands was its emphasis on what it called “port-intensive cruising.” This means scheduling one or more overnight stops…
Keep Calm and Visit Ukraine? Travel Advisors Deal with the Latest Blip
“Keep calm and visit Ukraine,” says one travel insurance supplier’s recent marketing campaign, in a tone-deaf call for travel advisors to become evangelists for travel to Ukraine (Visit Ukraine – INFORMATION PAGE FOR FOREIGN TOURISTS). And indeed, travel advisors report that many clients are holding steady on their planned cruises and FITs in the region, if not to Ukraine itself. Still, though, as final payments come due, politics and the drumbeat of military operations are beginning to take a toll. “I sell cruises only, and I’m a top producer for…

Share your thoughts on “How to Cruise the Baltic Now that St. Petersburg Is Off-Limits”