Onboard the Viking Invasion: Eight New Longships Dock in Europe

Posted on March 25th, 2022 by Cheryl Rosen in The Rosen Report

Onboard Viking Radgrid on the Seine — Monet’s Garden is not yet open and the cherry blossoms are just beginning to bloom. Even so, all of us in attendance were thrilled to kick off this year’s river cruise season in Europe, at the official Naming Ceremony of eight new Viking longships.

The actual ceremony was a joyful reunion of travel writers, travel advisors, Viking executives and Edelman PR folks, many of whom have not seen each other since 2020, when Viking decided not to launch these ships at all. Two years and five days later, we arrived on the very day France lifted most of its Covid restrictions, including pre-arrival testing for vaccinated travelers and masking at indoor venues.

Back then, Hagen noted, Viking had 10,000 employees, $3 billion in revenue and an annual growth rate of 24%. Today it is a river cruise line, an ocean cruise line, an exploration cruise company. Its ships sail in Egypt and on the Mississippi, and next year, on the Great Lakes. Luckily, he recalled, Viking had no new builds to be delivered in 2020, because it was a presidential election year, and that is usually a harbinger of recession.

This year, Viking “is bouncing back quite nicely; we have the right stuff for the right time,” said chairman Torstein Hagen. At this point in 2018, 21% of Viking’s 2019 inventory had been sold—but today, 31% of its 2023 capacity already has been taken, and Viking expects a growth rate of 47%.

It was the new longships, though, that were at the heart of the celebration last week. Four of them will sail from a new space in the heart of Paris, between the Eiffel Tower and the Statue of Liberty, for which Hagen has spent seven years negotiating with French officials. Although Viking’s business plan usually calls for holding down costs by using the same design on all ships, these four are shorter than the other longships. That allows them to make U-turns on the narrow Seine, but also limits the number of guests to 168 guests instead of the usual 190.

The eight longships join four others to make an even dozen newcomers in the Viking fleet this year: two ocean ships; Viking Mississippi, which will debut in June; and Viking Saigon, which will sail the Mekong starting in August.

Also new this year are a number of tours and excursions, including the 2022 Oberammergau on Danube and Rhine cruises; a special 2022 tour of the Valley of the Kings in Luxor and the National Museum of Egyptian Civilization in Cairo; extensions to Bruges, Antwerp and Floriade Expo 2022 in Amsterdam; and four new Christmas market itineraries on the Rhine, the Danube, and the Seine.

Travel Advisors in the Spotlight

At the ceremonies and the dinners, Hagen and others reiterated the important role that travel advisors have played in the company’s success. In this new hopeful season of rebirth, “we have a lot to be thankful for, and we owe thanks to many people in this room,” Hagen said.

Christopher told TRO that “for anyone who has had the pleasure of hearing Mr. Hagan speak about the Viking way, you have likely heard him speak about ‘who we [Viking] are and who we are not.’ I deeply appreciate that approach to business and life. And while some would say Viking’s policies throughout the pandemic have not been as flexible as others, I respect the consistency they have always provided, and continue to provide.”

Across all segments of the business and all preferred partners, she said, it’s the partners that have been the most consistent who “have made the constant changes that advisors continue to deal with every day just a bit more manageable.”

“What I appreciate most about Viking’s support during the pandemic is the incredible content they create to keep travelers engaged, as well as the tools they provide for advisors to share and best leverage that content. Travel, and encouraging others to travel more, is all about inspiration and connection and, in my opinion, Viking is a leader on both fronts.” 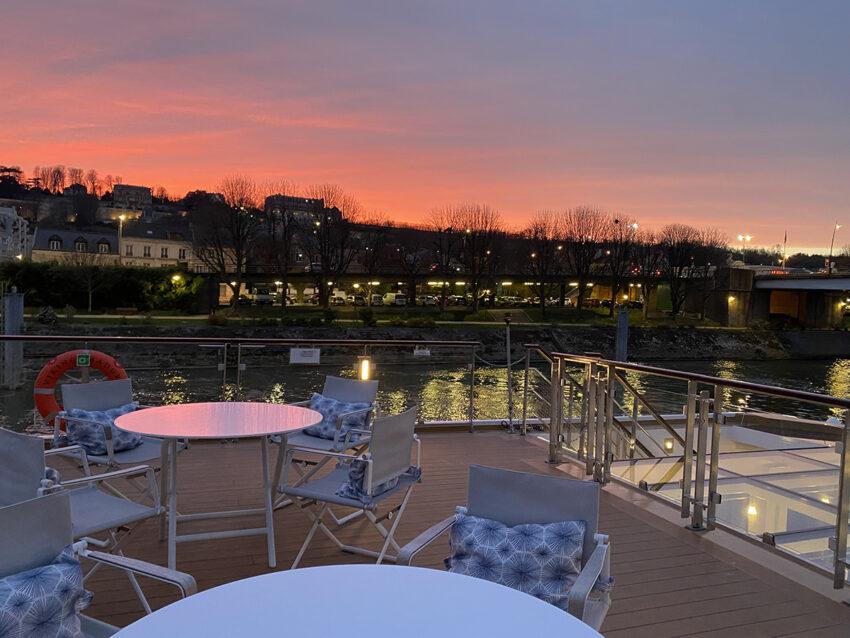 So what was it like onboard the Radgrid (and, by extension, onboard all the identical ships)? Hagen said he does not use the word “luxury” to describe the Viking experience, but he feels it is indeed an understated and quiet luxury—and I have to agree. Certainly on this maiden voyage the food was exceptional; the staff, pulled from Viking’s best, was attentive and knowledgeable; the shore excursions were original and thoughtful. I like the understated décor, and the Viking theme always makes me feel as though I am part of the history of Europe. The evenings included tastings of cognac and a spread of cheeses chosen by a master cheesemaker who has served the royalty of Europe.

While Hagen said masks will not be required after April 1, Viking remains steadfast in its belief that daily testing is the key to a safe voyage; Hagen said that while there have been cases of Covid onboard its ships, there has never been a major outbreak among guests or crew. Guests with a positive COVID-19 test are isolated on board unless the destination requires them to disembark, in which case Viking makes the necessary arrangements. Upon their return home, Viking Customer Relations contacts the guest and their travel advisor directly regarding any necessary refunding or rescheduling.

But talk of Covid was mostly put aside during our trip. Paris lay at our feet.

We walked through Monet’s village (though his beautiful gardens are still closed until April 1); we sailed past the Eiffel Tower at night; we toured the Louvre, home of Marie Antoinette. But, as Hagen said, it is the small and unexpected luxuries that stick in our minds: the little outdoor café inside the Petit Palais, where the flowers already are in bloom; the Rouennais macaroons that taste like apple pie; the Viking bookmark with which, unasked, my room steward marked my page in the book on my night table.

And one lesson learned this trip: If you have the chance to sail the Seine with Viking, don’t hesitate to skip the bus and take the bike tour into Giverny instead.

“Give It Three More Weeks”, Says Frank Del Rio
Just hang in there for two or three more weeks, travel advisors, and things will be better. That’s the biggest take-away from a press conference yesterday featuring Norwegian Cruise Line’s CEO Frank del Rio and the head of its Health and Safety Committee, Dr. Scott Gottlieb, who sits on the board of Pfizer. Here’s my transcript of what they said, slightly edited for brevity. I took notes in shorthand, which I am pretty good at but a word or two may be off, and I apologize for that.
Seatrade Global Roster: The Cruise Industry Looks Ahead
Half the cruise ships are sailing, carrying half the passengers they once did. At each port, they are beset by differing and ever-changing protocols, negotiating life-and-death decisions with new players with whom they do not have the usual long-term relationships. And yet, guest satisfaction is off the charts. The new-to-cruise customers that many expected to be frightened off are instead showing up. New ships and new partnerships, new terminals and new ports are on the horizon—and they promise to share the wealth with local communities and to promote a healthier…
Wonder of the Seas Inside Scoop: Things You Probably Don’t Know about the Biggest Ship at Sea
Aboard Wonder of the Seas, between Puerto Rico and the Bahamas — It’s Day Five of the Wonder of the Seas’ maiden voyage sailing the Caribbean out of Fort Lauderdale, with stops at San Juan and Nassau, Labadee and CocoCay. While only 60% full today, with a contingent of about 100 media and many Loyal to Royal repeat cruisers, at full capacity she can carry 6,988 total guests on 18 decks. A big ship fan myself(and a small ship fan too!), I’m having a blast, but with the help of…

Share your thoughts on “Onboard the Viking Invasion: Eight New Longships Dock in Europe”