On Riding a Yellow Submarine Under the Great Lakes

Posted on April 22nd, 2022 by Cheryl Rosen in The Rosen Report

Mask mandates are falling, but many travelers remain wary of international travel—making the timing perfect for a new kind of summer vacation. One that is unique, Instagrammable, domestic, safe—yet thrilling and lots of fun. Enter Viking Cruises’ newest product, an expedition ship chock full of motorized gadgets sailing the Great Lakes.

The brand-spanking-new expedition class Viking Octantis, custom-built to cut through the ice in Antarctica or slip through the locks of the St. Lawrence, launches in May. With prices starting at $5,995 per person plus air, the Polar Class 6 Viking Octantis holds just 378 guests in 189 staterooms and 256 crew. The focus, of course, is outdoors rather than in. The stars of the show are the assortment of yellow submarines, zodiacs, and Special Operations vehicles that guests can sail on and in at no extra cost, for a vacation unlike any most have ever taken.

A slimmer version of Viking’s Ocean product, Octantis keeps much of what sailors have come to love: beautiful understated décor, Manfredi’s and The Restaurant specialty dining venues, a glass-enclosed Explorer Lounge for watching the sea and the stars, and a luxurious spa with a snow grotto and sauna—all included in the price.

There are many differences, however. There is no Wintergarten. The big indoor pool has been replaced by three tiny ones with retractable doors that can let the elements in, or keep them out; it’s a fun place to hang out, but it’s standing room only. The only pool in which you can swim is the one in the spa, where you can watch land fade away to views of the open sea. The all-veranda suites are huge and roomy, with floor-to-ceiling Nordic balconies that open halfway and offer a ledge on which to lean yourself or your in-room binoculars—but true balcony lovers likely will miss being able to sit outside and watch the waves.

Sitting still is hardly the point on an expedition ship, though. Octantis’s beating heart is down on Deck A, where The Hangar opens to the elements and spits out small groups of intrepid travelers garbed in slickers and booties into the lakes. The ride on the military pro zodiacs is amazing in itself, but taking one out to the six-person submarine with 270-degree windows makes for an unforgettable experience. My trip on Octantis was in the Caribbean, where the sea floor held little more than rocks and an occasional fish; I can only imagine how exciting the submarine ride will be in the Great Lakes, where even few scientists have explored the depths. Also lots of fun are the 12-seat Special Operations Vehicles, the same kind used by the Norwegian Navy, that speed across the waves and close to shore, or the fleet of two-seater kayaks. Inside the ship, The Science Lab, developed in partnership with the University of Cambridge, will support a wide range of scientific research activities in which guests can participate. 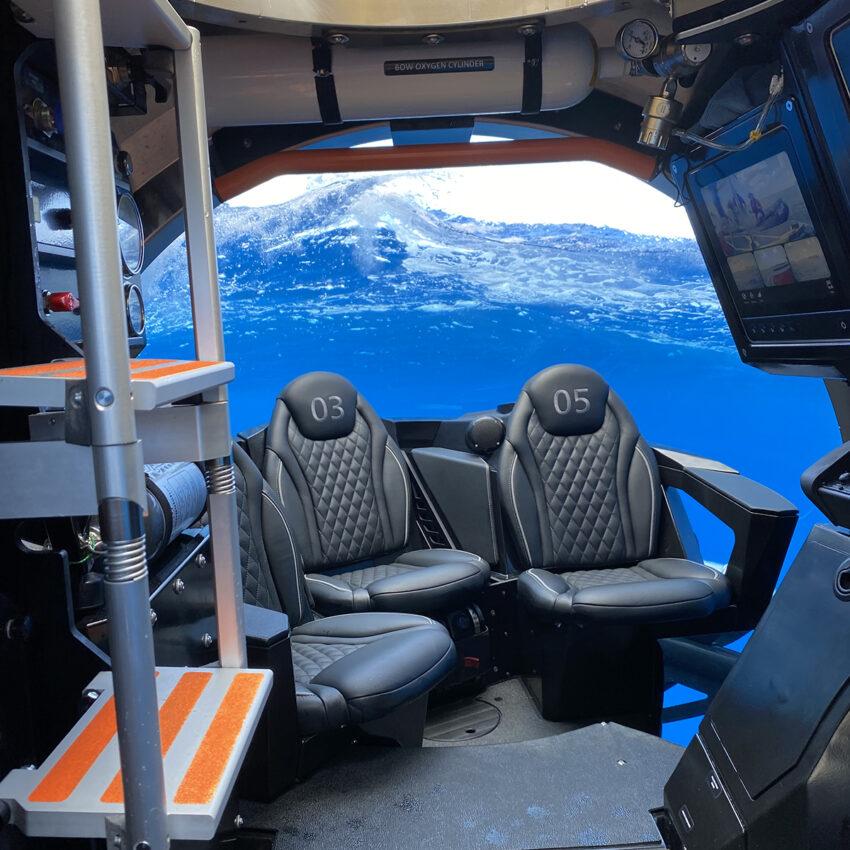 Like all things travel these days, though, getting onto the submarine in particular takes some luck and perseverance. There were 360 guests on our repositioning cruise, for example, all clamoring for the six seats in each yellow submarine. Priority went to those who had been onboard since Antarctica, and they claimed all the spots on all 11 outings the first day (and a staff member told me 11 was the most outings they had ever done in a single day). But a briefing for prospective submariners helped discouraged those who tended to claustrophobia or had issues with balance, as we needed to transfer from the zodiacs to the sub in rough waters—and by Days 2 and 3, despite the many trips that had to be canceled due to rough seas, the numbers who made it onboard grew steadily. Still, I’d recommend signing up the instant it becomes possible.

Here’s another insider tip: way up front, tucked into the bow on Deck 1, is The Hide, a beautiful, private little space that is noted on the Deck Plan on the ship’s website (Viking Octantis – vikingcruises.com), but not described or mentioned anywhere. If you are looking for solitude, this is the place.

Other new and beautiful additions on Octantis include the Aula auditorium, with its floor-to-ceiling windows; the Finse Terrace outdoor lounge area; The Bow, a large viewing platform at the very front of the ship obviously designed for looking at icebergs up close; and The Shelter, an enclosed space behind it that blocks the wind but still allows viewing (or just hanging out).

From May 19-26 Octantis will run from Milwaukee to Thunder Bay, Ontario, and the reverse beginning May 28, including Mackinack Island, Georgian Bay, the Soo Locks and Silver Islet. Prices start at $6,495 per person plus air.

One expedition itinerary that looks particularly interesting, as summer comes to a close, will be on Viking Octantis’s new sister ship, Viking Polaris. It will sail a repositioning cruise on September 26, 16 days from Toronto to Ft. Lauderdale, with prices from $11,995. It will start with eight days in Canada (Quebec, the St. Lawrence, Cape Breton Island, Nova Scotia) and then head south, stopping in New York, Norfolk, Charleston, and Ft. Lauderdale, with a sea day between each city pair.

Plenty of time to take those submarines out for a run!

Onboard the Viking Invasion: Eight New Longships Dock in Europe
Onboard Viking Radgrid on the Seine — Monet’s Garden is not yet open and the cherry blossoms are just beginning to bloom. Even so, all of us in attendance were thrilled to kick off this year’s river cruise season in Europe, at the official Naming Ceremony of eight new Viking longships. The actual ceremony was a joyful reunion of travel writers, travel advisors, Viking executives and Edelman PR folks, many of whom have not seen each other since 2020, when Viking decided not to launch these ships at all. Two…
RCCL Leaps Into World Cruising
It’s a traveler’s dream vacation, and a travel advisor’s dream commission—even a sign of hope that one day soon the world will be open and the seas free to roam. So, of course, Royal Caribbean’s announcement of its first-ever world cruise, the longest in the industry at 274 nights, made some headlines this past week. And for some travel advisors, it actually did get clients calling. While some said it was too long (especially for customers with pets) and some said it was too expensive for the traditional RCCL cruiser,…
From Hulu to YouTube, Advisors Find New Outlets for Marketing Travel
Let’s just say that unique times call for unique strategies. Being so deep in the throes of omicron concerns (could that have been just a couple of weeks ago?), it’s not surprising that some travel advisors took a step beyond the usual marketing strategies to reach new and existing customers. Leave it to the younger generation to head for Hulu. While everyone agrees that taking a group by the hand and posting your adventures on social media is the best way to build confidence among customers, 29-year-old Dillon Guyer put…