A Labor of Love, with Dancin Doug | Travel Research Online

A Labor of Love, with Dancin Doug

Posted on May 20th, 2022 by Joey DeLoach in Agent Perspectives

The start of my conversation with Doug Colon summed up the theme of the interview in its entirety. When asked about how things are going for him, he answered, “Trying to get this backyard done. My contractor didn’t show up, so I started on my own.” This being our first long-form conversation, I was going off what I’d researched online. He was there when break dancing took off in the early 70s, grooving with prolific DJs known for legendary innovation in hip hop—check. He’s currently the owner of Dancin Doug Travel—check. But now, right at the start, I knew that I was talking to a man who knew how to get up and get it done.

Mentioning the multiple positions Doug has held in different fields, “I kind of stumble and fall places. I’m a stumbler.” This was clearly evident in his path through life so far. Travel started as a break from his profession at the time, Special Agent in Charge, US. Office of Labor and Racketeering. When he moved into booking, his first experience was with a “card mill.” He continued, “I got $1.17 for a commission, or something ridiculous.” 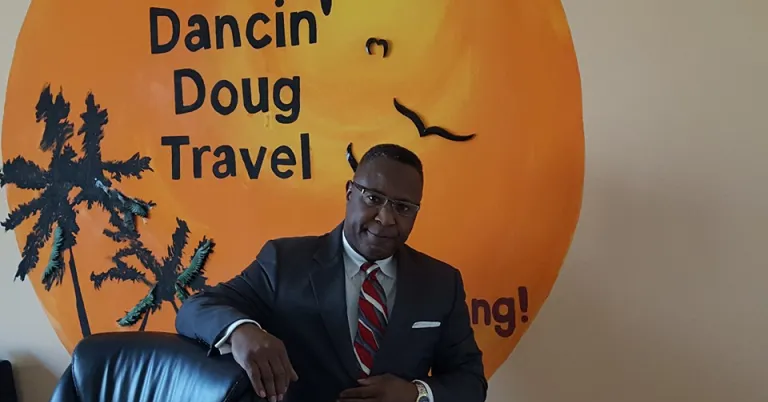 Disenchanted, Doug moved over to Nexion. The first trip booked was a cruise for 70 people, a college reunion. Realizing that he’d “topped out” at his job, he was now retired and looked to continue in the travel industry. “I did my next trip; it was like 120 people came. The next trip, I had 200 people come.” This obviously surprised him, but this wasn’t even close to the 503 people who signed up for a trip to Egypt—far beyond any known expectation. Though, he says, “and that’s the year they [Egypt] had those riots. So, that’s what taught me about counting my money beforehand.” Yet, Doug still took 50 people on that very trip.

Similar to the Egypt trip, and most agents’ experience, COVID-19 put a halt to a party trip of 700 people in 2020. Steady growth stunted in the blink of an eye, but not for long. Dancin Doug Travel is back to 400 people on the annual party trip.

In my research leading up to the interview, I watched YouTube videos recorded on the annual party trips. They looked, simply put, fun. Party is an understatement; they include professionally trained dance instructors, comedians, famous DJs, and live music. But, as I realized throughout the interview, having fun has been a lifelong passion for Doug. Being part of the creation and evolution of hip hop and breakdance, aka B-Boy culture, Doug was in on what makes a party great. Taking the party to the next level was more of an instinct than a choice. “When they [clients] leave, all they talk about is ‘give me the time for next year, so I can put in my vacation time now.’ ”

“Obviously it’s lucrative.”, he says. “But I didn’t do it for the money. Because I wanted to have someplace for me and my friends to go hang out at.” Doug didn’t advertise DDT. The word would spread by mouth, friends telling friends. “For the first seven to eight years, I knew everybody that was coming. Or, at least I knew who invited them.” It grew organically, in what he describes as germinating sideways… to eventually build upwards with a better foundation.

About then is when we had a moment of connection that ties directly back to my first impression. When asked about his interest in martial arts (Shotokan Karate and Vee-Jitsu), and how that has formed the discipline to accomplish so much, “It [martial arts] makes you push through things.” Doug went on to demonstrate, “I gotta do this thing, but I’m tired. I’m tired… I’m still going.” This resonated with me, as a practitioner of Kung Fu. Our, everyone’s, willpower and productivity are essentially tied into how we view our limits—further solidification of Doug’s skill in breaking those limits and getting the work done.

The Bucket List trips that Doug does, five for the year 2022, are also on the rise again. “We have nearly 50 going to the Maldives; about 75 going to Egypt; Hawaii is about 30; Italy is 30; and Alaska is about 25.” Though, at this point, I had to broach the earlier subject of COVID-19 in the future of travel. “If it shuts down, it shuts down…”, he says. A resignment to what may come, and what may not; but surely not in a pessimistic light. “That’s all you can do.”, Doug said.

Doug sends out a newsletter every week to his list, to “keep them abreast of what we’re doing… thinking about doing.” He favors clients calling directly to remain personal and to solve issues on a one-to-one basis. “People have maybe one week, maybe two, to have a vacation. You have to respect that.” Doug researches everything, “I’m a former Special Agent,” he said. This has given him an eye for researching the possibility of safety issues like riots or diseases, but also goes doubly so with the possibilities of creating fun times and catering to each traveler—the hallmark of a travel agent that cares.

As Doug so aptly said, “It’s a love thang.” And, from the work ethic he’s shown, it’s a labor of love.

Harry Potter, Alice in Wonderland, William Shakespeare, and Downton Abbey
I know that during November and December, thoughts turn to either staying closer to home or heading for sunnier climes. Given the pent-up demand for UK-bound travel among many of your anglophile clients, use some of these ideas to start conversations about spending a few days in the UK, either side of Thanksgiving. Several of them might be tempted sampling their favourite single malts among other aficionados at the Malt Whisky Festival in northeast Scotland, while others (like me) will be attracted to the baroque tones at the Mozartfest in…
Take Note of Six Good Reasons for a UK Visit Next May
With transatlantic flight restrictions between North American and the UK being lifted on 8th November, let’s talk about developing some itineraries that will really appeal to clients who, by next spring, won’t have been to the UK for over two years! Culturally minded travellers will relish what I can offer them when using the internationally famous festivals in Brighton and Bath as the hubs for 3-4 nighters before reaching London. Murder Mystery fans will enjoy rubbing shoulders with top crime novelists and some pre- and post-Father Brown/Inspector Morse ‘On Location’…
Experience Downton Abbey, a Royal Garden, and a Malt Whisky Festival
With interest in UK-bound travel gathering pace, I’ve put together a collection of commission-generating ideas for you to offer your clients. As some of them might have been hoping to go to this year’s Chelsea Flower Show, entice them with a tour that includes the Royal Horticultural Society’s Flower Show at Wisley along with Downton Abbey and the royal garden at Highgrove House. I’ve created a programme based around the hugely popular Jane Austen Festival in Bath (think of all those clients who are riveted by the many costume dramas…

Share your thoughts on “A Labor of Love, with Dancin Doug”