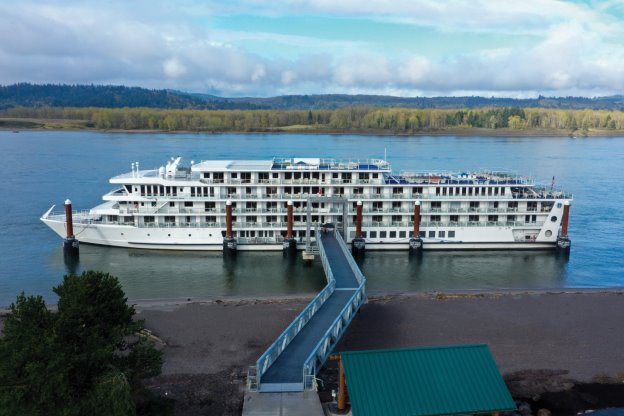 American Cruise Lines announced today that the 2022 river cruise season on the Columbia and Snake Rivers has begun. In April, American celebrated the new season with the opening of a new cruise dock in Kalama, WA, which the company built in partnership with the Port of Kalama. American’s fleet of riverboats has been cruising the region since 2010 and the company remains dedicated to the continued expansion and development of tourism throughout the river region. American has 4 riverboats exploring the Columbia and Snake Rivers this year between Hayden Island/Portland, OR and Clarkston, WA, and the Line will add a 5th riverboat to the region in 2023.

For 2022, American offers 3 different itineraries on the Columbia & Snake: a classic 8-Day Columbia & Snake Rivers cruise and a longer 11-Day Northwest Pioneers cruise (both between Hayden Island/Portland, OR and Clarkston, WA); and a 5-Day Highlights of the Columbia River cruise (roundtrip from Portland, OR). Guests on board American’s Columbia & Snake Rivers cruises can embrace their inner pioneer and retrace the epic route of Lewis and Clark, while relaxing aboard one of the Line’s newest modern-style American riverboats or classic paddlewheelers.

Throughout the region, small ship cruise guests are treated to never-ending views of the Pacific Northwest’s extraordinarily diverse landscapes—from mountains and desert canyons to flowery lush meadows. All cruises offer unique shore excursions each day, which follow a small-group format, led by local experts and guides. At every port, guests have the opportunity to explore towns and local sites to learn about the region’s history, culture, ecology, and geography. From a fun afternoon spent at a Columba River winery to a visit to Mount St. Helens or an active kayaking or hiking adventure, guests are immersed in the culture and beauty of the region each day of their cruise.

River and small ship cruising in the USA offers more new ships and destinations to explore than ever before. Riverboat explorations with American Cruise Lines are one of the most luxurious, seamless, and relaxing ways to travel. Riverboats on the Columbia & Snake for 2022 are: American Song, American Harmony, American Pride and American West.

American Cruise Lines offers river cruising and small ship coastal cruising in the U.S.A. Year after year, American continues to launch the newest U.S. built ships and uniquely curated itineraries for exploring and Cruising Close to Home®. On all American’s cruises, guests discover the history, spirit, and culture of the United States aboard a sophisticated fleet of American riverboats and small cruise ships. American operates 15 ships, all accommodating just 100-190 passengers, which cruise more than 35 domestic itineraries in 34 states. American now offers domestic Flat Rate airfare for all its U.S. cruises.