I love to visit early morning coffee shops when I am away from home. I listen to the locals meet and greet their friends during their daily ritual on their way to work.

It truly is better entertainment for me than today’s TV selections.

A recent visit was to The White Castle on Central Avenue in Clark, N.J. This could very well have been the birthplace of the famous New Jersey “Death Ball”—a greasy hamburger about the size of a quarter. (The coffee is a notch above okay.)

I was nestled in the corner hiding behind my open laptop when a policeman walked in and greeted the grill master. He then started chatting with another regular stool patron as they both propped themselves up against the counter. 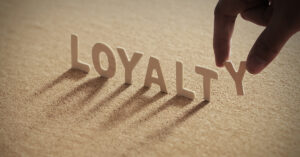 No Such Thing as Loyalty

The officer of the law apparently had a tree cutting business on the side when he wasn’t arresting the bad guys. He made it sound like his equipment always required repair and he was currently strapped for cash. (Sound familiar?) He then shared a story about a customer and declared in just short of a raised voice that there was no such thing as loyalty today.

His story began with him, the cop, providing all sorts of information to a man whose tree limb just fell on his house. He provided the homeowner with all sorts of sage advice along with an accurate quote for removing the limb from his roof.

He left the homeowner to study the quote as he moved onto the next fallen limb down the street. The cop soon received an email requesting a phone call. He mistakenly placed this task on his to-do list.

I don’t know how much time passed but, when the cop got around to dialing the prospect back, he received another email from the homeowner saying, “Since I did not hear back from you, I gave the job to another guy.”

Another unhappy ending to what could have been a decent payday. (The cop had four kids heading for college and he could have used the extra scratch.)

A few things come to mind from this story.

It underscores the importance today of getting back to prospects quickly. Your definition of “soon enough” may not be the prospect’s definition. The truth is that the people holding the wallet are the ones holding the “stop watch.”

I am sure Officer Krupke was a skilled officer of the law, but I had to question his business acumen—along with his choice of a healthy breakfast. (He ordered a donut to complete his three-egg breakfast with white toast and what looked like a pound of butter.)

Perhaps he should have mentioned to the homeowner that he would get back to him later that day around 2 pm. This would have told the prospect that he took this assignment seriously without appearing overly aggressive.

Remember the homeowner had a tree on his roof and this was a major priority in this guy’s life. I am not certain, but I am betting the police-tree-man might have interpreted this situation as “business-as-usual.” After all, nobody got hurt and there were no guns involved.

Let me wrap up today’s message(s).

First: Loyalty may not be a total thing of the past, but I too feel it is very close to being yesterday’s news. “What have you done for me lately” is more the norm in today’s option-heavy marketplace.

Second: In a world where instant gratification seems to be the rule, speed has become more important than ever. Buyers have too many choices to be put on “hold” for too long. The definition of “too” is up to the buyer.

Bonus Message – If you are looking for a little entertainment and you have a few hours to spare, go hang out at morning coffee shops. (Bring an open mind and a note pad.)

Why You Can Still Make It in the Travel Business
Although nearly two decades ago, I remember like it was yesterday hearing the following words at the home of two Russian immigrants in Chicago. The husband was now an emergency room surgeon, and his wife was a successful travel consultant. Their home was modest, yet beautifully furnished. After hearing their saga of eventually fleeing to America, arriving in New York City not speaking the language, the good doctor added after passing the rolls at the dinner table, “If you can’t make it in America, you can’t make it. “Those eleven…
Becoming ‘Slightly Famous’: A Strategy Worth Examining
Have you ever stopped to consider why multi-millionaire entertainers and business people take the time to appear on late-night talk shows for just a few minutes? Their pay (if any) for doing so is probably less money than they paid for lunch that day. So why does every celebrity you can think of try to get themselves booked on talk shows? The reason they want their faces blasted across the airwaves is simple. They realize that regardless of who they are—and what they may have accomplished to date—if they are…
A Message from the Kentucky Derby
It was 7 pm. As luck would have it, the race was just about to begin when I switched on my TV. I thought I’d missed it since I believed the race was at 5 pm. There in front of me was a long cage filled with horses with numbers 1-21. I noticed stall #20 was empty and thought to myself that #21 was so far off the rail it was simply a futile attempt. At least the owner, trainer, and jockey could one day say that they were in…