Posted on May 19th, 2022 by David Cogswell in The Incessant Traveler

From Wednesday to Monday I was in the northern, southern, eastern, and western hemispheres.

It’s nothing to brag about. There was nothing brilliant about it. On the contrary, it could be the worst-planned travel itinerary ever. The only accomplishment is that I survived it. But I did experience it, and that’s worth talking about. It was extraordinary.

I didn’t intentionally plan such a marathon. It only happened because there were two travel events that I absolutely could not miss. They happened to be very close together on the calendar, and very far apart on the globe.

I had already booked my flights to the Arctic Circle when it came time to book flights for the trip to Durban, South Africa. I considered canceling the flights and rebooking so I could fly from Svalbard down to South Africa. But it was too complicated. And I wanted that two-day layover in Jersey. I didn’t want to drag my winter gear, my voluminous insulated pants, and parka to South Africa. I needed to go home, regroup, repack and take off on a very different kind of trip. 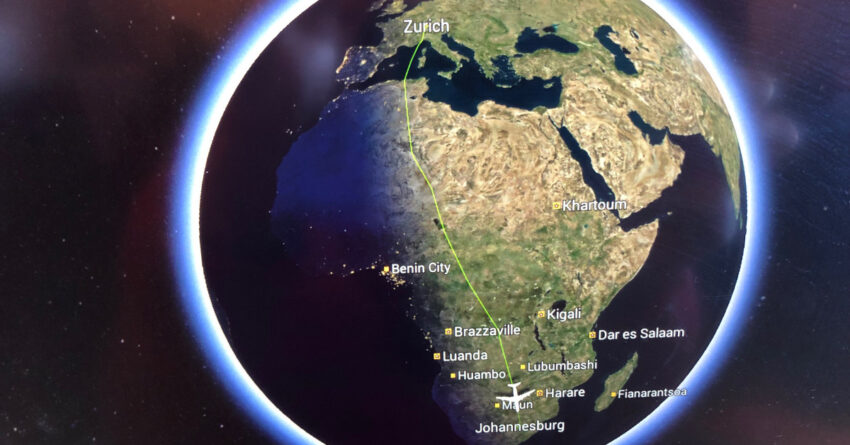 To explain why both trips were unmissable, the first trip was an opportunity to travel on Lindblad Expeditions’ new National Geographic Resolution to the island archipelago of Svalbard, which crosses the 80th parallel. Number 90, for reference, is the North Pole.

It was the first Arctic voyage of the Resolution, which was just christened last November and started its sea life doing Antarctic trips during the austral summer of December, January, and February. The company’s founder and chairman, Sven Lindblad, was set to be a special guest on the trip. In addition, it was going to be the first time Lindblad Expeditions ever sailed to Svalbard so early in the year. The trip was called “Svalbard in Spring.” Previously, the company’s Svalbard journeys begin in June, but this was set for late April. So, it was a very special opportunity, and I could not imagine my life going forward if I missed that trip.

The other trip, to Africa’s Travel Indaba in South Africa, was also unmissable. Indaba is one of the largest travel trade shows in the world, focused exclusively on Africa. While most of the big travel shows cover the whole world, Indaba is concentrated on Africa; and the collective Africa-centric energy at that event is like a great hurricane of human interaction and activity.

Though Indaba began as a South Africa travel show, in recent years, as other trade shows have come to South Africa, Indaba has branched out to cover all of Africa. It provides a concentrated experience of Africa and comprehensive access to the travel industry of the entire African continent. For people who have any kind of special interest in African travel, it’s a necessary yearly activity.

I was worried heading into that period of heavy travel. When I thought about my itinerary, I wondered, is this humanly possible? Is it sane? It was indeed a grueling itinerary. But that’s the way things happen sometimes, so I gritted my teeth and moved ahead with it.

It was only when I was looking at the flight map on the screen while flying from Zurich, Switzerland, to South Africa that I realized that I had actually been in all four hemispheres. Zurich came into the itinerary at the last minute.

Initially, I had been booked to fly direct on United from Newark to Johannesburg. But United canceled a number of flights because of a fuel shortage in South Africa. I was re-booked on Swissair, with a stop in Zurich of about 10 hours. It added a day to my flight time.

Since South African Airways is not flying the transatlantic route now, as it works through its bankruptcy, there are few options for traveling from the US to South Africa without going through Europe or Asia. I actually flew northward from Jersey to Zurich before I could make the southward journey to South Africa from Europe. United’s cancellation further complicated an already-complicated itinerary.

In regard to the North-South axis, I went from a point 600 miles from the North Pole to almost the southernmost point of the African continent.

It was a six-hour time change from New Jersey time to both Oslo and Svalbard. Out of 24 time zones total, that’s a quarter of the way around the globe. Then after returning to Jersey, I traveled back over seven time zones to South Africa.

The experience of the time change was further jumbled by the fact that the sun never sets this time of year in the Arctic. It’s daylight all the time. Our circadian rhythms are synched to the cycles of the sun rising and setting. But once we got to Svalbard, we didn’t see night again till we returned to Oslo about a week later. In Svalbard, they won’t see night again until late August.

While the ship had a daily schedule of meals, activities and events, the 24-hour daylight made it seem like a timeless zone. It never got dark. When you wanted to sleep, you just pulled the shades and pretended it was night. I never really quite adjusted to the six-hour time change. It got to where it didn’t matter what time it was.

Now that it’s all over, the schlepping around wasn’t nearly as bad as I might have feared. The trips themselves were stellar, over the top. Making those transfers was tiring, no doubt. But that’s just the nature of air travel. It’s nearly miraculous that the international flight system can move us across the world the way it does. It beats the hell out of wagon trains. And with the possibility of remote connectivity, airports can be good as offices or just places to hang out.

When I was traveling between destinations, I didn’t grasp the magnitude of it. It was more or less just a car and a plane and a room and a coach and a plane in series. And although I didn’t intend to travel so much in six days, it was in itself a mind-blowing experience. It was one of those experiences that make you really aware that you live on a planet, a sphere that rotates in space.

After two years of being more or less stuck within a small area, it was exhilarating to get back out and do some serious traveling again. It proved to me that I can still do it, and it reminded me how inspiring and stimulating it is to travel to foreign places and expose yourself to many things that are different and challenging to you.

It was head-spinning to go from snow-draped mountains and frozen sea to sub-Saharan Africa on another side of the world, and about as different as it gets from the polar regions. Either trip alone would have been seriously mind-altering. Putting them together multiplied the effect.

There’s still the extra element of navigating through COVID protocols. But it’s just part of travel now, and it is getting easier—gradually.

That brings me to a place where I can say that, for me, the lockdown is finally over. I did all that traveling and did not contract COVID or suffer any bad consequences. So it’s a good place to be. For me, travel is back. And welcome indeed.

What’s in a Name? Travel Advisor, Counselor, Agent, or Champion?
“A rose by any other name would smell as sweet,” said Juliet Capulet, according to William Shakespeare. Times change, names change. Peking became Beijing. We got used to it. It doesn’t really matter. Bombay is now Mumbai. Canton is now Guangzhou. Saigon is Ho Chi Minh City. St. Petersburg became Petrograd, then Leningrad, and now is St. Petersburg again. Constantinople is Istanbul. Natal province in South Africa became KwaZulu-Natal. New Amsterdam became New York. Cross Keys, Pennsylvania, became… Intercourse? I swear. It did. Look it up. Now travel agents are…
Delta Vacations’ New President: “Never Let a Crisis Go to Waste”
It’s a time when senators, mayors and congresspeople are dropping out of public service, CEOs are stepping down at an unprecedented rate and leaders are abdicating their positions in droves—overwhelmed by the extraordinary demands of the times. The person who stepped into the leadership position at Delta Vacations, however, is eager and plucky. “I can’t think of a better time to be joining than the last couple of months,” she told me. “There’s so much opportunity on the horizon to really create a strong connection with our customers and our…
Uganda Calls to Responsible, Adventurous and Culturally Curious Travelers
Lilly Ajarova, the CEO of the Uganda Tourism Board, visited New York last week in preparation of Uganda’s rolling out of a rebranding campaign. The slogan for the country will change from “Uganda, the Pearl of Africa” to “Exploring Uganda, the Pearl of Africa.” It’s only one word changed, but as Mark Twain said, the difference of one word can be like the difference between lightning and a lightning bug. More important than the change of slogan, the tourism department is changing its idea of how to market itself and…