Posted on July 8th, 2022 by Britton Frost in Deck Plans

It is hard to believe that it has been almost a month since I left for France to sail on Emerald Cruises’ Liberte. The ship so quickly felt like home, and I have been missing it dearly for the nearly three weeks since I have returned to North Carolina.

Those of you who have read our previous coverage from the journey know that I sailed with my grandmother, GG. We were invited by Emerald Cruises to spend eight days in Southern France, sailing from Arles up to Lyon along the river Rhone.

GG and I had dinner together last night and shared our stories from the trip with the rest of the family. Though I already posted Three Things I Loved About Emerald Liberte, our dinner conversation last night left me wanting to share more with you. There is so much to love about the ship, crew and the Emerald experience as a whole. 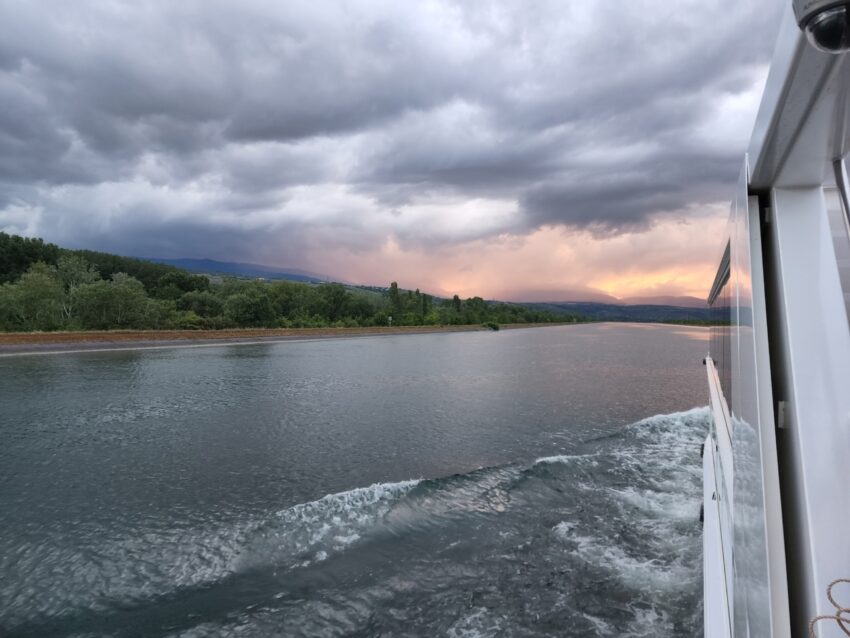 The crew on board were professional, well-trained, funny, and outgoing. The restaurant staff, led by Restaurant Manager João, were extremely attentive and caring. My grandmother has a shellfish allergy and our server, Galina, made sure to point out to her anything that she was unable to eat on the menu each night. It was always appreciated to know that the staff were paying special attention to dietary restrictions and/or allergies. 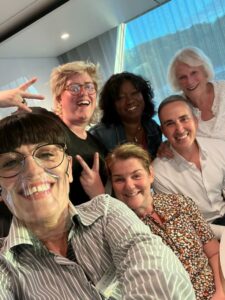 Our Cruise Manager Luk was full of wonderful insights and stories. Each night at Luk’s port talk he would end with what he called “a moment of a-ha”. The goal of these stories was to teach us a nugget of information that we would easily be able to slip into a conversation, something that would make us say, “a-ha!” For example, if you’ve seen a Euro note you might have noticed that there are bridges on them. The bills were initially supposed to have pictures of bridges from different countries around Europe but it was thought that the countries whose bridges were not chosen would be upset about it. So they decided to take inspiration from the bridges instead. However, a city in the Netherlands called Spijkenisse built all the bridges on the notes in their corresponding colors, which technically means that now the notes do show real bridges on them. A-ha!

As I mentioned, the crew had a great sense of humor. In my Postcards From The Rhone post, I mentioned a game we played called Liar’s Club, citing it as one of the highlights of our trip. Four heads of department sat on stage with a microphone and gave a definition to a foreign word. Three would lie, and one would tell the truth. What made this game so fun was the selection of words chosen. These ranged from the German, “nuttendiesel,” to the Slovak, “bublifuk,” and then to the Hungarian, “fakanal.” Everyone in the lounge could not stop laughing.

Late-night games and activities, like Liar’s Club, were lead by our Activity Host Drazen. Drazen was the man to get the party started, whether he was hosting trivia in the lounge or crazy golf on the sun deck. He also led exercise classes like water aerobics and yoga, to name a few. Drazen constantly kept me laughing, smiling and, most importantly, moving.

There were usually a choice of two to three excursions a day, though sometimes more. These would generally consist of a tour and an active option. Drazen lead active tours, like hikes, bikes and even a canoe trip. Other tours were led by local guides. 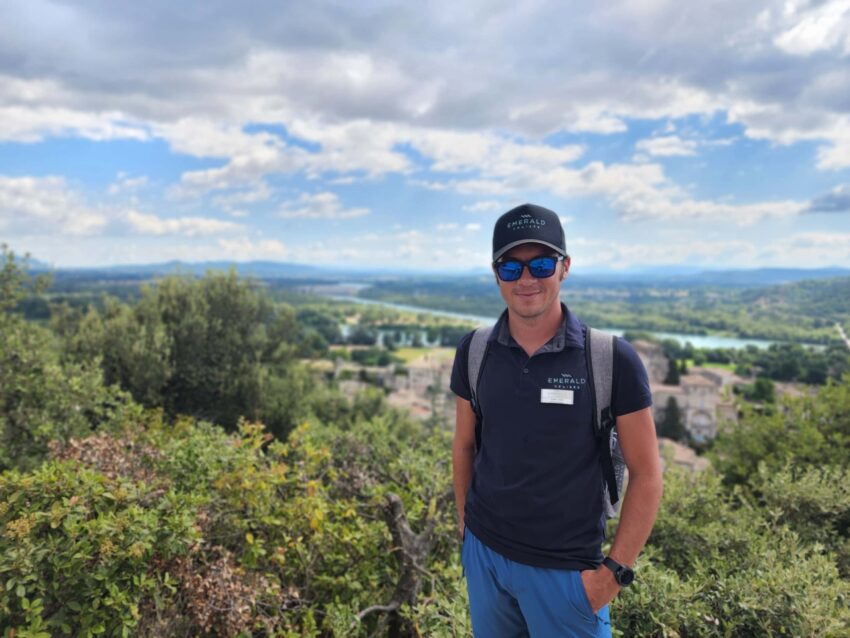 The variety in excursion choices were perfect for my grandmother and I traveling as a multigenerational pair. She was able to go off and do tours with a group, while I could go on the active tours or go exploring on my own. It was fun to meet up at lunch and talk about what we did in the morning, sharing pictures and stories with each other.

For those who wish, there are also DiscoverMORE excursions offered at an additional cost. These excursions included a fishing class, classical music concert, visit to the Pont du Gard, and more.

The environment on board was casual, which I appreciated. Sometimes the pace of river cruises can be quick and it can seem like you are just constantly going. Emerald does a good job balancing activities and free time so that you feel that you have the chance and the choice to do it all.

Emerald’s COVID protocols are on par with what I consider to be the industry standard. There are enhanced cleaning and disinfecting protocols, the crew were masked and guests were asked to wear masks when moving around the ship, to name a few.

Protocols were more relaxed than any other sailing I’ve been on since the pandemic, with no testing requirement to board. Long gone are the days of assigned seating, shore excursion “bubbles” and an abundance of plexiglass dividers – I hope.

Emerald does still require guests to be vaccinated to sail.

While mentioning COVID protocols I have to mention that, to no fault of Emerald, my grandmother and I tested positive for COVID on the second to last day of the sailing. At the time of our sailing, we were still required to have a negative COVID test to return to the United States. The group of us needing COVID tests were lead by Cruise Manager Luk to a pharmacy, where we paid about 30 Euros each for a test. My results read positive almost immediately, though I had no COVID symptoms at all. Upon receiving my positive result, I was instructed to return to my cabin on board. GG followed suit as she received her result just minutes after mine. 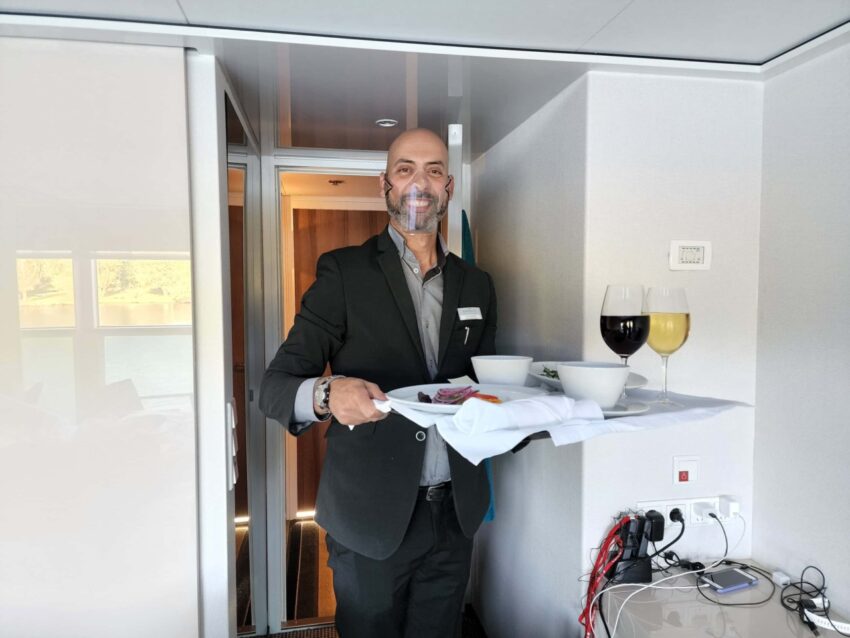 Once we got back to our cabin, we received an array of calls from many members of the crew. The Restaurant Manager called to take our orders for dinner, which he delivered to our room himself. Luk called to see if we needed assistance finding a hotel or transportation in Lyon, where we would stay for two nights until we were able to return home. Many others called to wish us well and make sure that we had everything we needed.

This was a really special trip, not only because I was traveling with my grandmother but also because it was the first trip where I finally felt that things were returning to normal again, (even though we tested positive for COVID). I was impressed by Emerald for so many reasons, but it was the crew that went above and beyond to make sure that my experience was one that I would never forget.

Postcards From The Rhone
Britton and her grandmother are cruising the Rhone on Emerald Liberte. They are guests of Emerald Cruisers for the purposes of this review. Britton has been sending updates of her trip as they cruise along. She’ll have a more detailed report when she returns home. Saturday, June 4, 2022 WELCOME ABOARD Day one of the journey. How exciting! I have to admit, the airport was not easy. This is a busy time of year, and it is normal to expect delays and cancelations. In fact, some of our fellow passengers…
Highlights Of AmaWaterways’ 2023 Season
AmaWaterways today released the print version of its 2023 Europe Brochure, offering a look at new vacation experiences, including its Seven River Journeys, Celebration of Classical Music: The Danube cruises, and new 5-night Majestic Capitals of the Danube cruises.

Share your thoughts on “Final Impressions: Emerald Liberte On The Rhone”