Halfway to Europe and Half the Hassle: Terceira Island Welcomes US Agents and Their Customers | Travel Research Online

Halfway to Europe and Half the Hassle: Terceira Island Welcomes US Agents and Their Customers

Posted on July 1st, 2022 by Cheryl Rosen in The Rosen Report

Looking for a laid-back European experience that offers a UNESCO World Heritage town with cobblestone streets and friendly locals, bullfights and whale watching, dormant volcanoes to hike and sunken vessel to explore—and all without the hassle of big airports? Perhaps the Azores are the destination for you and your customers.

For a small archipelago, the Azores hold a large spot in history. Smack dab in the middle of the Atlantic Ocean, halfway between North America and Europe, they have offered dry land, potable spring water and fresh food to sailors and pirates, doughboys and explorers. For tourists today, they are a stepping stone to a fun and easy vacation that’s just four or five hours from New York by plane, with a time difference of just four hours that makes communication with home easy and keeps jet lag to a minimum.

To kick off its new direct service from JFK, SATA Azores Airlines flew a group of New York travel advisors and press to this Portuguese paradise in the North Atlantic last week. (Tip for Douro River cruisers: We caught the weekly round-trip on Mondays to Terceira, but we shared the plane with many locals bound for Lisbon, who took advantage of the opportunity to get off and spend a day or two on Terceira at no extra fare.)

Our guide apologized for the crowds this week, when an annual festival brings matadors and bulls that run in the streets (though no bulls are injured), along with parades and pop-up food stands and the traffic they bring. But to us New Yorkers, staying in the four-star Zenite Boutique Hotel just a couple of blocks from the action, it just added to the fun. (Tip: Ask for the rooms that end in 01; room 001 has a private outdoor courtyard and 101 and 201 have balconies to enjoy the fresh air, which was a perfect 75 degrees or so.)

Before the parades and fireworks began each day, we had plenty to keep us busy. Our hometown, Angra de Heroismo or simply Angra (“anchor”), a former capital of Portugal, sits on a hill fortified in the 16th century against invading pirates and Spanish troops. All the explorers we studied in history class passed through here. Today the harbor sports a public beach, shops, and restaurants. Seafood is a staple, of course, along with beef from the local cows that wander the hillsides and mate with the bulls, cheeses from their milk, and vegetables and local wines from the vines that grow in the rich volcanic soil.

My two favorite meals were an assortment of the best fish I ever tasted, pulled fresh from the sea and then heavily salted and lightly fried, at Beira-mar; and pretty much everything on the menu, plus an amazing wine list, at Taberna de Roberto. Try the local specialty of fried lapas (limpets), which look like little clams, and the unforgettable lemon meringue pie baked by Roberto’s wife. This is also the place to try the local beef; because the cows run free, the meat can be tough here for the American palate. So forget Tomahawks on the grill and go with Roberto’s steak with egg. Book early; Roberto told us he will never expand this small place he calls home, because he is content with life as it is. A typical Terceira story. 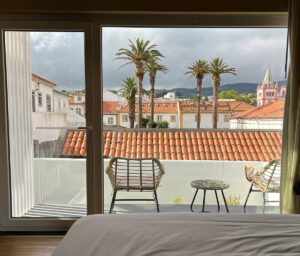 Meals at all the restaurants we visited were delicious, though. Our guide, Ramiro Barbosa, working with the Chamber of Commerce, took us to Tasca das Tias, the QB Food Court, Caneta, Oficina de Esquina, Associacao Agricola da ilha Terceira (the local union’s restaurant), Quinto dos Acores, Taberna de Teatro, and the Michelin-starred Shipyard.

Our adventures included a zodiac ride around the rocky volcanic cliffs of the Cabras Islets and into the caves carved by the waves, a visit to the Vaquinha Cheese Factory, a tour of the vineyards and amazing natural swimming pools in the lava in Biscoitos. Our whale watch produced just one whale, but a few hundred dolphin scampering in the sunshine, for an unforgettable sight. So was our descent into the mouth of a dormant volcano at Algar Do Carvao, where the sunlight shines high above an underwater lake.

Those staying a little longer also can take a look at the neighboring islands, accessible by ferry (rent a car here, where it’s cheaper, and drive it onto the boat, our guide says) or by plane. The flight to Sao Jorge, for example, takes just 15 minutes and costs about 100 euro—and the Chamber of Commerce is working on a plan to offer a free trip to all tourists.

Also interesting was a tour of the local military base, available to the public by appointment only. Built during World War II, the base at one point housed 10,000 Americans. It was used as a staging point during Desert Storm and Desert Shield, and still is manned by a small contingent of US forces, along with the Portuguese military, to protect the North Atlantic. Where once they watched for German U-Boats, today’s soldiers support an airfield used for emergency landings of airplanes and rescue sailors in distress.

Among the travel advisors on the fam trip, Trisha Vale of French’s Worldwide Travel in Newington, CT, came along “to familiarize myself with an island I know nothing about,” she says. Her takeaway? “Terceira may not be right for someone looking to party but It has some great towns and places to have fun. It would be a good destination for someone looking for great hiking, and interesting and different beaches, maybe surfers up around Biscoitos. And the temperature is a big draw; it’s a very temperate island all year round. It has that island feel, a lot of culture and history and oh my gosh, the food. Every place we went to was magnificent.

“It’s a great destination for someone who wants something a little different and off the beaten path, someone who’s been to Europe or is headed to a river cruise on the Douro and wants to break up the flight a little bit,” she said. “I’d say it’s just right for physical foodies, who like to walk and do things and then have a great dinner and some local wine.”

Agreed Dennis Quigley, product manager for Tripmasters, “I absolutely loved the island. The food and wine were great, and the people were welcoming and very proud of the links they have to American history and culture. That was maybe one of the most interesting points for me. It also provides great value for the money.

“I see two specific types as the right customer: Clients interested in an active vacation, due to the surfing, hiking, boating, and exploring options; and second, clients looking for something off the beaten path, away from the traditional European cities without sacrificing modern amenities.”

As an independent contractor since retiring from the 9-to-5 to travel more, she has written regular articles about the life and business of travel agents for Luxury Travel Advisor, Travel Agent, and Insider Travel Report. She also writes and edits for professional publications in the financial services, business, and technology sectors.

The Four-Hour Hold: Travel Suppliers Respond to Advisors’ Complaints
Part 2 of 2 in a series on how to cope with long telephone hold times. Read Part 1. Gilligan might have regretted booking his three-hour tour on the S.S. Minnow that turned into a 60s TV show, but today’s travel advisors have come to rue their own travel nightmare: the four-hour telephone hold times involved in trying to reach some suppliers. At AmaWaterways, chief marketing officer Janet Bava noted that call volumes skyrocketed when Europe loosened its travel guidelines in March. “We saw a huge influx in demand, and…
Insiders Launch Three New Services for Travel Advisors
After months of isolation that have made people long to reconnect, a number of industry players are launching new services designed to bring travel advisors—from top sellers to brand new entrants—together in new and unique ways. The biggest is The 1000, an ambitious effort to find, honor, and support 1,000 of the nation’s top-producing travel advisors (think $1.5 million minimum in annual sales). Founder Jeff Sirota—whom many know from his past life on both sides of the industry, at Protravel and at Small Luxury Hotels of the World, now a…
Ama’s Bava on Christmas Markets in Portugal and Other Ways to Earn High Commission This Year
AmaWaterways extended its Portugal river cruise sailings through the Winter Holiday Season this week, for the first time, adding 14 new round-trip sailings in Portugal on the AmaDouro. It’s a sign of how strong the interest in Europe river cruises is running this year, says chief marketing officer Janet Bava. “We saw a huge influx in demand for Europe with the loosening of travel guidelines, and very quickly got a lot of demand for the western side of Europe. We were completely sold out for Portugal,” she told TRO at…

Share your thoughts on “Halfway to Europe and Half the Hassle: Terceira Island Welcomes US Agents and Their Customers”