Chapter 3: Let’s Get Some Things Straight

Sales is hard enough without voluntarily making it more difficult than it has to be. In today’s message, I am going to share with you four myths usually connected with the selling profession… and what you can do about them.

Myth #1: The belief that selling is simply a number’s game.

This implies that if you do enough “stuff,” call enough people, write enough letters, make enough appointments, send enough postcards, or return enough phone calls you will be rewarded handsomely for your efforts.

I am not disagreeing that if you throw enough marbles into the air, one or two will land in the cup situated ten feet away. There is some interesting data supporting The Law of Numbers.

However, this does not take into consideration that you only have 50- 60 years left to get this sales-thing right. Playing by the numbers is another way for going to market by “spraying and praying.” The invention of the Internet and Google are largely responsible for altering yesterday’s selling processes. 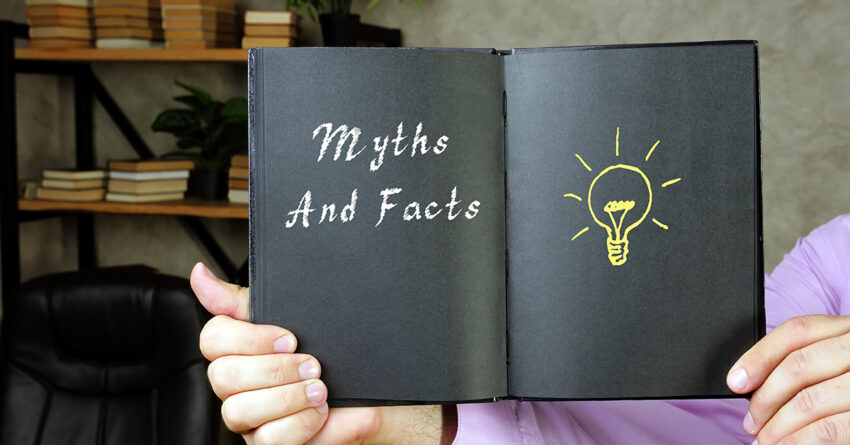 Myth #2: You must become comfortable with being rejected as it comes with the territory.

The old popular warning is, “In sales, you will be receiving more “no’s” than “yes’s. Get jiggy with it”—or something like that. My friends, if you spend three milliseconds bemoaning the fact that you have been “rejected,” it is my professional opinion that you just wasted three milliseconds of your life.

Repeat after me: “IT IS NOT ABOUT ME.”

Stop flattering yourself thinking that people rejected you. People don’t give a hoot about you. They don’t have time, inclination or reason to reject you. They have decided not to purchase the service or product based on any one of a thousand reasons. And if you do happen to be one of those reasons, it is probably number 957 or higher.

If, for some reason, you do feel rejected after a sale goes south, and you have professionally said and done everything you could have said or done, I want you to say the only two words that make sense at times like these: “WHO’S NEXT?”

Myth #3: Selling is a stressful career.

Stress is only a “given” if you insist on pretending that the world works differently than the world works. That’s exactly the time when stress enters your life. As soon as you realize that you are living in an imperfect world and are playing on an often-times unfair game board, you will exhibit what I refer to as Emotional Intelligence. That is when much, if not all, of your self-inflicted stress will be minimized.

Stress is self-inflicted, my friends, more often than not. Learn to see the world as it really is. And when betting between you and the world, the smart money is going to be on the world.

Myth #4: To be successful in sales you must like people.

Fasten your seatbelts, because what I am about to tell you may rock your boat. “I have been in sales since 1975 and, as a general across the board statement, I don’t like people.”

How does that make you feel? Allow me to explain.

The “I like people” card is far too wishy-washy for my liking. Reason being, I have been around the bases more than once, and I have come across some pretty nasty, difficult, boring, obnoxious, rude, dishonest, manipulative, negatively-aggressive individuals. I say with all sincerity, I DON’T LIKE THESE SLUGS.

You say: “But, Mike, you are a professional salesman and you are supposed to like people. These people are people.”

My polite response: “Yes. These people are people. But they are also slugs. I don’t like slugs. I have no time for slugs. I choose to have nothing to do with slugs. I won’t work with slugs.”

Nobody ever said you must do business with everybody. I don’t like people. I like the people I like. And not only do these people get my attention, they get my undivided attention coupled with all my energy, enthusiasm, creativity and effort.

Taking Advantage of “Hidden” Opportunities
I am not sure if this can be considered my “signature story,” but it’s true that I have been sharing this particular point for over 30-years in my public speaking business. It involves a single PowerPoint slide where I ask the audience to count the number of times they spot a particular letter, clearly printed on the slide. It is not a trick. It calls for a single answer. The result has been the same for over 30 years? I get four different answers to the question where there is…
Sales: Art or Science?
Science tells us that water boils at 212 degrees farenheit. This is not an opinion. The boiling point doesn’t change depending on the day of the week or the economy. Your political persuasion does not affect the exact time that water boils, nor does the price of gas on any particular day. Water boils as expected: 212 degrees. 211 degrees… no boiling. At 212 degrees you can watch the bubbles begin. Art, on the other hand, shows us details and then allows us to interpret it as we see it.…
Chapter 1: Likeability
Sales today, regardless of your industry, is more competitive as ever. The old style of selling simply doesn’t work today. Buyers, customers, and clients are too smart… too street savvy… too educated to fall for any textbook trick from some fast-talking salesperson “with the “gift of gab.” On the other hand, people still have needs and will continue to buy goods and services at an unprecedented rate. So, what is one to do if the future of their business relies on finding and serving new customers. Should we learn how…

Share your thoughts on “Chapter 3: Let’s Get Some Things Straight”