The Freedom to Travel: Do You Have It? | Travel Research Online

The Freedom to Travel: Do You Have It?

Posted on July 21st, 2022 by David Cogswell in The Incessant Traveler

Do you believe you have the right to travel?

You may have taken it for granted that you are free to travel wherever and whenever you want for whatever reason you wish, but it may not be that simple. Legal reasoning can get very weird and can lead to some surprising places. And then there’s politics.

Dobbs v. Jackson, the recent Supreme Court decision that overturned Roe v. Wade and the right to have an abortion, was based on the idea that the right to an abortion is not mentioned in the Constitution.

“We hold that Roe and Casey must be overruled,” proclaimed Justice Samuel Alito, in the majority opinion. “The Constitution makes no reference to abortion, and no such right is implicitly protected by any constitutional provision…”

This could raise a red flag for some, because the word “travel” is also not mentioned in the Constitution. Wouldn’t freedom to travel be established in the phrase “life, liberty and the pursuit of happiness”? That would seem to be “self-evident.” But that phrase was in the Declaration of Independence, not the Constitution. 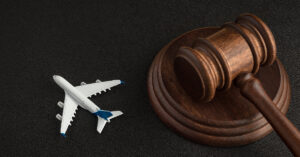 It may seem far-fetched to think that the government could outlaw travel, but it was enough of a concern to Justice Brett Kavanaugh that he explicitly addressed the travel question in his concurring opinion on the overturning of Roe v. Wade.

In speculating on “the future implications” of the decision, Kavanaugh wrote, “May a state bar a resident of that state from traveling to another state to obtain an abortion? In my view, the answer is no based on the constitutional right to interstate travel.”

But we know that sometimes “no” changes to “yes.”

Kavanaugh calls travel a constitutional right, though it is not named in the Constitution. Maybe someone else could apply the same logic that was used to overturn Roe v. Wade to restrict travel.

To the extent that those efforts succeed, we will live in a country where interstate travel can sometimes be prohibited by government. You could say, “Well that’s a special case because that is stopping people from traveling to commit a crime.” But in the case of traveling for an abortion, the whole point is to go to a place where it is not illegal.

In any case, once you have established the power of government to restrict travel for one reason, you have opened the door to restrict it for other reasons.

In spite of Kavanaugh’s belief that a state can’t bar a person from traveling to another state for an abortion, some organizations and lawmakers are now looking for ways to stop citizens from traveling out of state for the purpose of getting abortions.

The Washington Post recently reported that an anti-abortion organization is looking at possibilities for legislation that would prohibit women from traveling to another state to seek an abortion.

A group of state legislators in Texas called the Texas Freedom Caucus are reportedly looking into ways to “impose additional civil and criminal sanctions on law firms that pay for abortions or abortion travel,” beyond the state.

Lawmakers in Missouri have twice considered bills that would prohibit women from traveling to other states for abortions. So far, neither was enacted into law. The Missouri bills would rely on private enforcement through civil lawsuits, like a recent Texas law restricting abortion that was passed last year.

A recent bill put forward by Democrats to federally ensure the right of women to travel to other states for legal abortions was rejected by Republicans. Fortunately for travel rights, the Supreme Court has affirmed the freedom to travel on a number of occasions.

In the 1860s Nevada imposed a tax on “every person leaving the State by any railroad, stagecoach, or other vehicle engaged or employed in the business of transporting passengers for hire.” It was an early version of the departure tax, but the Supreme Court overruled it in Crandall v. State of Nevada.

The majority opinion declared that “the right of locomotion, the right to remove from one place to another according to inclination, is an attribute of personal liberty, and the right, ordinarily, of free transit from and through the territory of any State is a right secured by the Fourteenth Amendment and by other provisions of the Constitution.”

In United States v Guest in 1966 the constitutional right to travel was established, in a majority opinion by Justice Potter Stewart, which said that the right to travel from one state to another “is a virtually unconditional personal right, guaranteed by the Constitution to us all.”

That ruling overturned an earlier ruling that had said the government could only protect the right of freedom of movement when state governments infringed on it, not when private individuals did. In any case, the right to travel has been through many twists and turns, and there are many shades to the legal reasoning. It’s not black and white.

The Dred Scott decision ruled that African Americans would not be considered free men because they had traveled to a free state and escaped a state where slavery was accepted practice. They were still bound by the laws of the pro-slavery state they had escaped from. That was the high court’s endorsement of the most egregious policy in this country’s history. According to that decision, African Americans would always be property, and never could be citizens with rights. So, the freedom to travel has had many different variations in American history.

International travel is another story. The Constitution in the 1700s didn’t go there, and today the federal government does regulate international travel. Cuba is an example of that. Travel is also restricted to North Korea. In most cases, the State Department only issues travel advisories or warnings; but in rare cases, it regulates or prohibits travel to certain countries.

In the mid-60s, when the US trade balances seemed to be draining American capital, President Lyndon Johnson promoted a “See America First” campaign to reduce the amount of money that travelers were taking out of the country. But that was just a PR campaign, not a law or a restriction, and no one was bound to obey it.

In the 1980s the US government prohibited travel to Vietnam. Lars-Eric Lindblad skirted the restrictions and took tourists there in defiance of the law, and got hit with heavy sanctions that pushed him to the edge of bankruptcy.

There are many in the travel industry, both Republican and Democrat, who believe that the government has no right to restrict the travel aspirations of its citizens. In the case of Cuba, huge potential markets are blocked, and that frustrates the business community, which normally tends to favor conservative policies. But nevertheless, the government does assert that power, and the business community has to live with it.

At this juncture, I am betting on Americans retaining the right to travel. I don’t think many politicians or even judges, would want to try to challenge that right. The migratory urge in Americans is deeply ingrained and not likely to submit to suppression. We’re a population that’s like a raging sea. I wouldn’t put my bets on anyone who tried to restrain that spirit.

Cruise and Tour Boom: Tauck’s Post-lockdown Resurgence Is All Over the Map
Tauck is experiencing a post-lockdown boom that is making Steve Spivak, vice president of global sales, very happy. “We’re seeing such a great resurgence in the type of travel we offer,” he told me, “not just luxury, but truly immersive, bucket list-type travel.” Tauck has already carried more passengers this year than it did in all of last year. Its booking pace has exceeded that of 2019, the last year before the COVID pandemic. As unprecedented as the lockdown was, the bounce back for Tauck is also creating a novel…
Collette Adapts to Post-Lockdown Changes in Demand
For Collette, the century-old Pawtucket, R.I.-based tour operator, the removal of COVID testing requirements for entering the US was the opening of the floodgates for people to travel again. I spoke to some of the Collette people last week. “As soon as testing requirements were dropped, we immediately noticed that our phones were ringing off the hook for international travel,” said Amelia Sugerman, senior manager of strategic communications. “Prior to that, 70 percent had been domestic. But when they dropped testing on June 12, in the five days following, the…
Cuba Policy Changes: It’s All About Perception
Some good news for travel to Cuba came last Wednesday, June 8. About three weeks after the Biden announced that it was pulling back some of the Trump-era restrictions on travel to Cuba, the government has clarified what those policy changes will consist of. The good news is that People to People travel is back. The details of the regulatory structure were released by the Office of Foreign Assets Control (OFAC), the part of the United States Treasury Department that regulates what money can be spent by Americans in Cuba…

Share your thoughts on “The Freedom to Travel: Do You Have It?”