Posted on July 11th, 2022 by Brittany Chrusciel in Spotlight 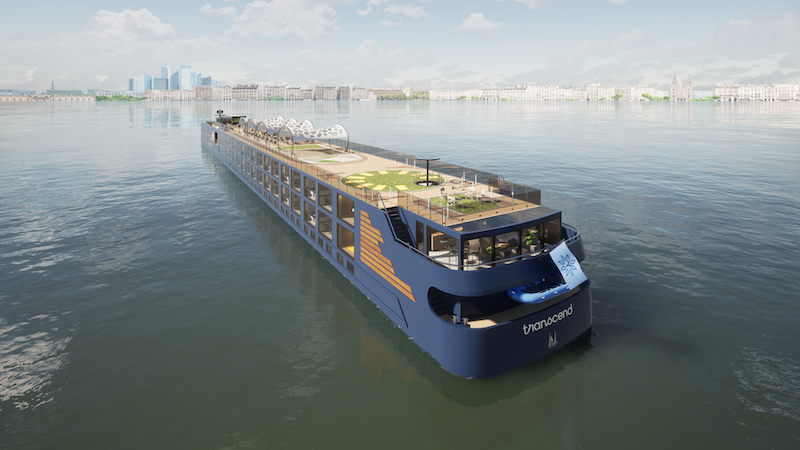 Do you have a college reunion or a big annual conference on the horizon for 2025? There’s an increased chance it might take place on a river cruise ship.

Transcend Cruises, a new river cruise line formally announced at Seatrade Cruise Global in April, aims to be a straight-shooting B2B travel company that will open for charters in spring 2024 on two identical, 442-foot-long, purpose-built ships. In addition to their charter-only approach, sustainability and a wellness focus are built into the DNA of the brand.

TRO spoke to Matthew Shollar, Transcend’s co-founder and self-proclaimed chief evangelist, about what will separate and sustain the cruise line in the saturated European cruise market.

With more than 20 years in the luxury travel space, Shollar began his career in early online cruise marketing and was a pioneer of personalization technology (whether the consumer was looking for a family cruise or party weekend). Shollar’s charter career began with his company Chosen Voyage, which charters full ships aboard lines like Windstar or Ponant for kosher-inclusive cruising. After some investigation, Shollar realized that there were no economies of scale for a one-ship cruise line, but that the market was there with more interest in charters than there was capacity to host them.

Shollar acknowledges that current river cruise companies do a great job with their delivery, but that “extracting [charter] product from a retail space can be challenging.” He cites blackout dates, product mix, pricing pressure, and lack of customization as hurdles to chartering a ship. “The core demographic of most river cruise lines is typically 65-plus, with not a lot of programming or wellness, and just one lounge,” Shollar says, referring to a lack of fitness equipment and public space on most existing river ships.

Shollar mentions that more than once, charter contracts with deposits made were dropped because of a sudden surge in retail bookings for the cruise line. Data protection was another concern; the guests of a corporate group are not looking to receive brochures or marketing from the host cruise line a week after they sail, according to Shollar.

Currently, the charter business is only a few percentage points of most river cruise line’s earnings, with a concentration on the primary part of their business. Shollar describes it as an “exercise in inventory reduction” — not the main focus.

Itineraries are another concern when it comes to chartering a ship with one of the mainstream river cruise lines; voyages are typically set for a season and they’re not very changeable; the ship has to be back in retail circulation to join the next itinerary, so flexibility on destinations is limited. On the other hand, Transcend ships are able to visit popular ports of call “off cycle” or on days that ports aren’t overloaded with other consumer-based vessels. This also contributes to their mission of sustainability.

“We don’t start with an itinerary, we start with a premise. What do you as a client want to do?” Shollar explains that Transcend Cruises has priority docking in 170 locations through its dock operator. Shollar uses Frankfurt as an example, which has an airport with great airlift and makes a fantastic jumping-off point for the Moselle River, which is less frequented than the Rhine or Danube. He also notes that Holland and Belgium are year-round, not just “tulip time,” and allow guests to just walk off the ship, without needing a coach.

Transcend’s ships, which will carry a maximum capacity of 120 passengers, can be a family reunion in double-occupancy cabins for one sailing and then transformed to an all-suite ship for 60 executives on the next. Public spaces, which include several meeting rooms and lounges that can host lecture series or awards dinners simultaneously, also adapt to accommodate the number of onboard guests. Flexibility in all things is the key focus of the company.

All of the digital signage onboard allows for individual branding and ambient lighting would allow for a Coca-Cola charter to have a red hue, for example. Shollar tells me there will be many support services onboard and technology that can acclimate to each company’s needs. Behind-the-scenes necessities like storage and private office space to run the program or charter are also built into the design of the ships.

“We’re selling a venue; that venue is independent of how the client wants to use it,” Shollar says. Apart from a three-night minimum, the river ships have options aplenty, including the ability to sail only one night for a dinner cruise; remain in a location with a strong internet signal given business needs; or sail to more off-the-beaten-path ports on a weeklong itinerary.

Transcend Cruises’ nuanced approach to chartering includes a simple fee structure: Everyone pays the same flat price. Shollar explained that to charter a retail ship, there is no set pricing model. Shollar calls it a “secret sauce” that estimates what the line would have made on the sailing and that the cruise line can sometimes take weeks to provide a quote (and in the interim, if they gain more bookings, they might hit a trigger point and decide they’re not chartering after all).

Transcend Cruises’ pricing model will fluctuate with seasonality, but Shollar made a point to mention that commissions are not capped, they’re net. “So if the agent can charge 15 or 20 percent and the client is happy to pay, we’re happy to involve them in that. We shouldn’t be dictating what they can make on their sales.”

The price of the charter doesn’t change depending on the number of guests; the fewer people onboard, the more services can be added and tailored to them. “The product innately scales,” Shollar says. “The base product is about 4.5 stars, if you will, to 5-plus when there are just 60 or less guests onboard and a 1:1 staff ratio.”

The flat pricing model is underscored by the notion that being a B2B player, the pricing is tailored to each client. The ship is purpose-built to accommodate what is needed and adaptable to each market with sizable public spaces, offices, facilities, and convertible staterooms that offer just one cabin or suite type. Shollar notes that it’s critical for corporate clients to offer uniformity in accommodations for employees or participants.

Additionally, no penalties are charged by Transcend if clients wish to bring their own resources or tour operators onboard, including private guides. This is a huge shift from the revenue focus that cruise lines have on shore excursions and add-ons. With Transcend’s charters, tours are not included, so those short walking tours are not built into the price — it’s all a la carte. A per-diem brochure of tours is available, and they are priced to include a flat planning fee.

No call centers and no retail marketing also relieve costs that are typically bundled into river cruise pricing, without hundreds of dollars in capture costs per guest. Shollar explains that there will be a little bit of halo marketing, just to get the word out, but because they’re not in the FIT business, they’re not competing with the bigger players in river cruising.

“Post-COVID, people want to be in their own space, on smaller vessels, nearby readily available medical care — great hospitals are 10 minutes away [on European rivers],” says Shollar. “Exclusive use is a huge trend right now, and I think that is going to last for quite a while. Companies don’t want to be at a resort with 5,000 people they don’t know; they want to rent something out where they can better control the environment.”

Transcend Cruises’ ships will primarily be operated in English, though many staff onboard will speak German as well. Booking translators is a service that can be added on through Transcend’s custom programming, and additional cabins allow for this type of staffing. “We’re a worldwide product; not just selling in only English-speaking markets.”

Shollar tells me that staffing shortages are not an issue at this point, with about two years until the cruise line’s launch. Shollar believes that because of how they are uniquely positioned in the market, professionals from ocean ships and even land-based hotel products will be attracted to join.

Regarding clients, Transcend is looking at a big source market to draw upon. “We’re expecting well over 50 percent of clients to come from hotels and resorts, not other cruise options,” says Shollar. “Maybe they have cruised before, but businesses are shifting away from land-based options.”

Shollar believes that by exposing more markets to river cruising, Transcend’s charters will actually bring more people into the river cruise market by way of introducing working-age (read: younger) clientele to the idea of a river cruise as a vacation. “We don’t want to compete. We have an opportunity to come and do something that doesn’t exist in the market.”

Norwegian Cruise Line celebrates full relaunch of its fleet
Norwegian Cruise Line (NCL), is celebrating the 17th and final ship in its fleet to return to service. NCL’s return to service after a 500-day pause began with Norwegian Jade’s July 25, 2021 sailing from Athens (Piraeus), Greece. Since then, the Brand has systematically relaunched its ships around the world, welcoming guests and crew members aboard.
United Airlines suspends seven routes out of Newark and Washington Dulles for June
Updated May 17th 10:41 PM. United to resume service of 777 fleet pending final approval United Airlines suspended seven of its long-haul flights in June citing a diminished number of aircraft resulting from the grounding of their Boeing 777’s after an engine disintegration showered a Denver community with debris.
JetBlue launches hostile takeover bid for Spirit Airlines
Countering an earlier rejection by Spirit Airlines of an offer to buy Spirit, JetBlue has launched a hostile takeover bid to motivate shareholders of the low-cost airline to reject a proposed acquisition by Frontier Airlines which has offered $2.9 billion.