Ireland’s Puck Fair- No Kidding, the Goat is King

Posted on August 11th, 2022 by Richard Earls in Outposts 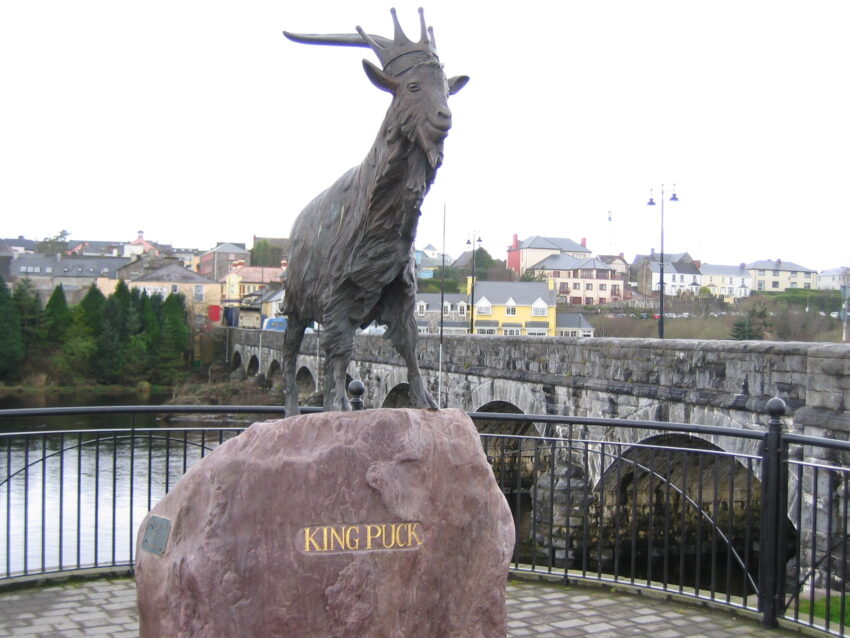 For three days each year in August, more than 20,000 people converge on Killorglin in Kerry in Southwest Ireland for the coronation of a goat. But not just any goat. No sir. That is King Puck on the stage in the center of town overlooking the river Laune. It is best to be full of good spirit in the King’s presence because everyone else is! A three-day event commences amidst traditional Irish music. Saturday is “Gathering Day” and the bars are filled with patrons all weekend. “Fair Day” follows and finally “Scattering Day”. But what is this about a goat and why is the Puck Fair Ireland’s oldest?

In the McGillycuddy Reeks, the highest mountains in Ireland, wild goats take refuge. Each year the “Puck” is caught by the townspeople. On Gathering Day the town’s civic leaders lead the captured and somewhat confused goat through the town streets. When the procession reaches the town square, Puck is coronated “King Puck” and then spends the next three days on a raised platform 20 feet about the town, watching his mad subjects below.

OK…appears we have some pagan underpinnings here. Certainly, there seem to be some links to pre-Christian celebrations of a harvest and that the male goat is well known as a pagan symbol of fertility. Some will tell you that the festival began in honor of the Celtic sun god in an ancient festival of Lughnasa. Another legend, however, dates the Puck’s role in the fair to 1650 when Oliver Cromwell advanced on Kerry. A herd of goats raised the alarm, with one brave male goat running directly into town bleating a call to arms, alerting the town’s people to the invading army of British soldiers. In his honor, the Puck Fair came into being. King James I in 1610 granted the livestock fair in Killorglin an official status, making the Puck Fair the oldest continual fair in Ireland.

During the Puck Fair, various livestock auctions and events are held. Horse traders gather from all over Europe and the United States to buy, sell and trade their mounts, while farmers from the local area trade out their cattle and sheep. The Guinness Music Trail Competition is held during the Puck Fair, with local pubs competing for the Guinness Cuchulainn Statuette. There are parades featuring bands from across Ireland, and music on every corner. The streets are filled with street entertainers and at night fireworks break out amidst the merriment.

But it is immediately apparent that it is the humans, not King Puck, who are having the best time. The pubs are open until 3 a.m. each day. After three days of music, livestock, and Guinness, the crowds release King Puck back into the mountains, freeing him from his courtly duties.

Your travel agent will have many excellent packages and air programs to Ireland during all months of the year. Shannon hosts the international airport closest to Kerry, but many fly directly into Dublin and travel from there. Your agent will likewise arrange car rental for you. Killorglin is located on the Ring of Kerry Road. From Killarney take the N72 and from Tralee take the N70. Some of Ireland’s most breathtaking scenery is along the way.

The Ring of Kerry is worth the visit in its own right. The circular drive runs the mountains of Kerry on the Iveragh Peninsula past stone walls, old castles, and monasteries. These are some of the world’s most beautiful hills and vales harboring some of the world’s friendliest people. There are many places to stay during your visit: Killarney is popular, and for more remote and intimate accommodations, also consider Kenmare, Dingle Town, or one of the surrounding communities. While you are there, be sure to also visit the Celtic ruins and early Christian monasteries and shrines in the Dingle Peninsula area.

Have a great time, and be sure to pay your respects to King Puck!

Posted in Outposts, Top Headlines | Comments Off on Ireland’s Puck Fair- No Kidding, the Goat is King
Tagged With:

Japan to reopen to tourists for first time in 2 years with a “test tourism” program
The Japan Tourism Agency has determined to conduct a “test tourism” program in May prior to a full opening to travelers. Small group tours will be permitted into the country in May to ascertain how well protocol measures will prevent an increase in Covid-19 cases.
AmaWaterways explores Black heritage and culture
If you search “river cruising + Black” results might return the Black Sea or the Black Forest — but very rarely are Black travelers represented in river cruising. AmaWaterways is taking a step toward inclusivity with its “Soulful Epicurean Experience,” a first-of-its-kind sailing that will focus its Rhone River voyage in the South of France through the lens of Black history.
JetBlue and Spirit Merger may create a national low-fare airline – or not
JetBlue Airways Corporation and Spirit Airlines, Inc. today announced a merger agreement had been approved by their boards of directors. Under the agreement, JetBlue will acquire Spirit for $33.50 per share in cash for an aggregate fully diluted equity value of $3.8 billion. Yesterday, Spirit terminated its proposed merger with Frontier Airlines.