The Summer of Chaos Turns Autumn

Posted on September 25th, 2022 by Richard Earls in Publishers Corner

Just before the “Summer of Chaos” began in June, I wrote an article suggesting we all anticipate the problems that would occur as travel returned and the need to practice patient generosity. Yesterday, returning to Tallahassee from Dallas, I arrived in Atlanta to learn my 10:30 PM flight, the last of the night, had been canceled due to “unexpected crew complications,” and I needed to see a Delta Agent to rebook my flight. Having also written an article on the new DOT Dashboard, I sought out my Delta Agent armed with a new set of rights. As it turned out, Delta had beaten me to the punch and, before having to ask, was offered hotel and meal vouchers. I didn’t make it home last night, but I did have a meal and room provided by Delta. (Shout out to Delta Agent Sharon Hendricks and to Yvonne Sodexo in the B concourse Delta Lounge, who made not getting home tolerable). This morning, Delta customer service sent me an email apologizing for the situation and offering additional frequent flier miles as compensation.

Good customer service and a great attitude can remedy a lot of ills.

The next morning, the Atlanta check-in process was an absolute zoo.  Believe it or not, the photo below is of the TSA PreCheck line, with almost 300 people ahead of me. 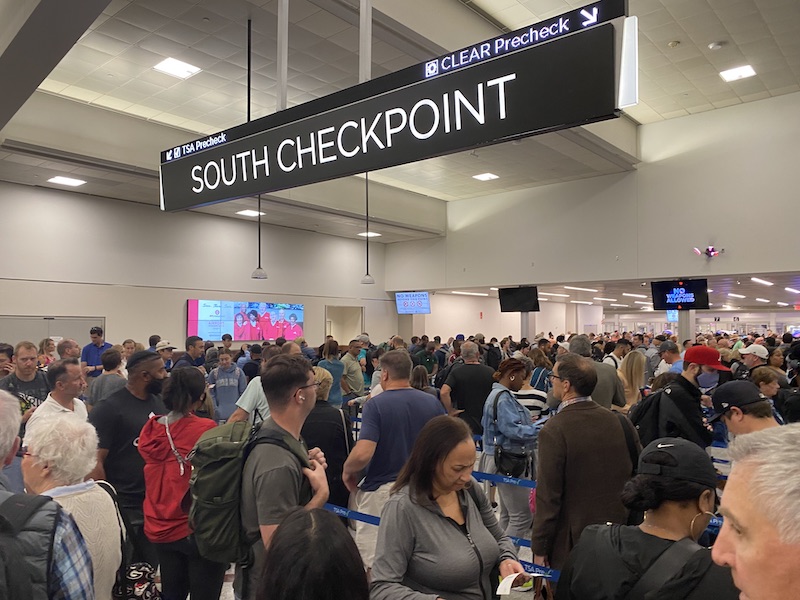 An informal poll of the people around me and in the hotel the night before revealed many of those in line were there because of canceled flights.

So is the Summer of Chaos over? Yes, it is now Autumn’s turn.

I believe we, and clients, are going to continue to see problems in the near term, probably for the balance of this year, especially during heavily trafficked holiday travel. Plan appropriately with as much lead time as possible on your travels, with plenty of margin for error and with knowledge of the new DOT Dashboard and client rights. But, just as importantly, tell clients to take their goodwill and patience along with them. It is my experience that flight attendants, gate agents, and airport personnel are working under pressure non-stop right now. Anticipating problems with clients takes some of the sting out of unwanted surprises and, remember, goodwill is often returned in kind.

Share your thoughts on “The Summer of Chaos Turns Autumn”