Posted on October 28th, 2022 by TRO Staff in Crossings 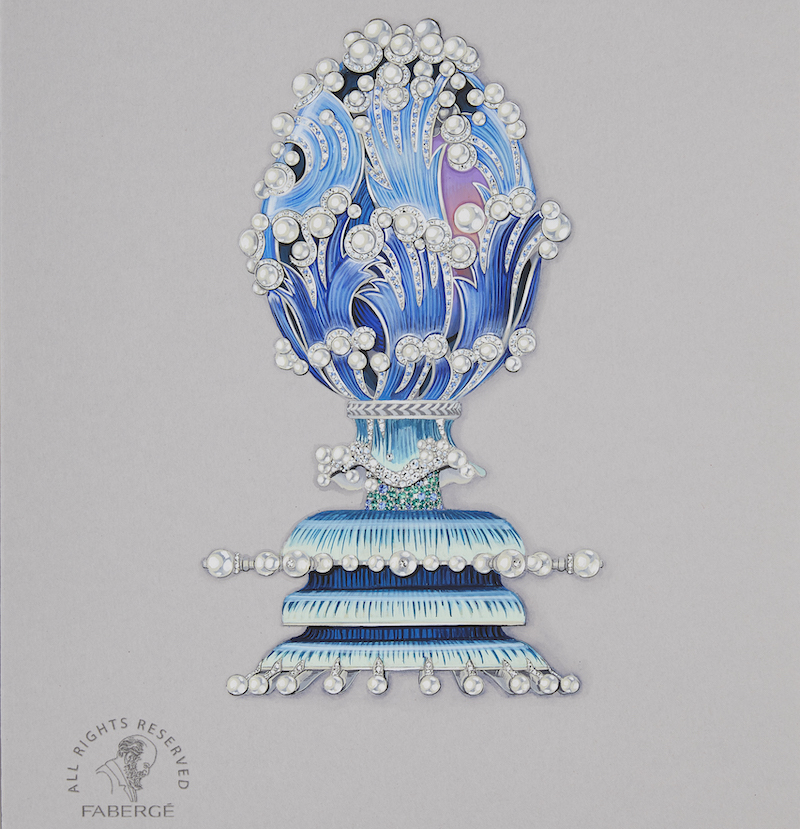 Together, the leaders in luxury have unveiled a bespoke design for a hand-crafted Fabergé x Regent Seven Seas Cruises® Egg Objet to anchor the ship’s new art collection, becoming the first Fabergé Egg Objet to reside permanently at sea. Capturing the essence of how the powerful natural elements of the sea create ‘The Voyage’, this unique creation also reveals a number of ground-breaking firsts for Fabergé.

This exciting partnership extends to the creation of two exclusive ‘Spotlight Voyages’ which will immerse guests and art enthusiasts into the world of Fabergé and provide exclusive access to Fabergé experiences and experts onboard these sailings.

The Fabergé x Regent Seven Seas Cruises® Egg Objet, titled ‘Journey in Jewels’, will be the pièce de résistance of a multi-million dollar curated art collection which will debut on Seven Seas Grandeur. Regent is known for providing guests with access to exceptional artwork by the likes of Picasso, Miró and Chagall on display across the fleet.

‘Journey in Jewels’ is not available for sale and the prized art piece will only be on display to guests aboard the highly anticipated Seven Seas Grandeur. Regent chose to partner with Fabergé for the central piece of the art collection due to the iconic jewelry brand’s legacy of perfection, craftsmanship, relentless pursuit for excellence and ability to capture a moment in time and create stories and art pieces that span generations. Similarly, Regent’s newest ship, Seven Seas Grandeur, is inspired by the past and stunningly reimagined for the future, exemplifying the cruise line’s Heritage of Perfection with unrivaled space, unparalleled service, exceptional cuisine, and transformative experiences that begin the moment guests step onboard.

A captivating video which reveals the design can be viewed at RSSC.com/faberge.

“With each new ship we want the journey itself to provide opportunities for discovery and enrichment as much as the destinations along the way,” said Jason Montague, President and Chief Executive Officer, Regent Seven Seas Cruises. “Likewise, each Fabergé objet has a different story to tell, and we knew that our very own Fabergé x Regent Egg could become the type of awe-inspiring piece that would captivate and inspire our guests throughout their voyage with us. It’s the perfect art piece to place on board our newest ship, Seven Seas Grandeur.”

“For Fabergé to have been selected to create the jewel in the crown of Seven Seas Grandeur’s prestigious art collection, which will permanently live at sea, is a very exciting milestone and a first in Fabergé’s 180 year history,” said Josina von dem Bussche-Kessell, Fabergé Creative Director. “It’s a great privilege to be able to creatively pay homage to what makes being out at sea such a special experience.”

Ground-breaking Techniques Inspired by Heritage, Nature and “The Voyage”

As a nod to the importance placed on heritage by both Regent Seven Seas Cruises and Fabergé, the unique ‘Journey in Jewels’ Egg Objet takes inspiration from the iconic Fabergé Winter Egg of 1913, while also heavily representing the natural elements of the sea. Conjuring up visions of epic voyages on the water, the egg’s three-tiered base is a gentle cascading waterfall of ocean greens and subtle turquoise, while its outer shell’s soothing deep blue waves become lighter, before breaking into a sea spray of pearls.

Exterior features of the egg objets design include a ground-breaking ombre enamel shell; this is the very first time that Fabergé has applied this intricate enameling technique to an egg, marking this a milestone moment for the Maison. Enameling is an incredibly technical skill, which is made even more challenging with egg objets due to the added complexity of applying the enamel to a curved surface.

The outer egg ‘shell’ is comprised of seven blades, representing the seven seas, which will unfurl to reveal a surprise hidden inside, details of which are being kept as a closely guarded secret until Seven Seas Grandeur is christened in 2023.

Bussche-Kessell continues, “With the ‘Journey in Jewels’ Egg Objet we have introduced some new enamelling techniques, whilst also honoring one of the most valuable and artistically enchanting historic Fabergé Egg Objets, the Winter Egg. We’ve also carefully referenced nature’s spectacles of the sea, with stunningly delicate details across the many layers of this technically advanced piece.”

‘Journey in Jewels’ will stand at approximately 18cm tall, with a three-tiered base which hides the movement of the egg’s opening mechanism – the first time that Fabergé has hidden the movement in this way.

Designed by Fabergé’s Head of Design, Liisa Tallgren,  ‘Journey in Jewels’ is being entirely hand-crafted by one of Fabergé’s appointed Workmasters, and a dedicated team of artisans based in south-east England. From conception to crafting, the egg will have taken 48 months to complete come November 2023 when it will be specially housed, pride of place in Seven Seas Grandeur’s splendid atrium.

In celebration of the ‘Journey in Jewels’ Egg Objet, Regent Seven Seas Cruises and Fabergé have created two new Spotlight Voyages. These very special sailings will immerse guests into the world of Fabergé with unique and intimate tours, as well as spell-binding lectures.

The first exclusive sailing will be hosted by Fabergé’s Curatorial Director Dr. Géza von Habsburg on board Seven Seas Splendor in June 2023, sailing from Southampton, England to Stockholm, Sweden. Guests will explore Fabergé s connection to Great Britain and British royalty, before extending to Scandinavia to discover the origins of Fabergé’s craftspeople and the Fabergé collections in Denmark, Norway, and Sweden.

Sarah Fabergé, great-granddaughter of Peter Carl Fabergé and founding member of the Fabergé Heritage Council, will also host a sailing on board Seven Seas Grandeur in 2024.

Montague continued, “These exclusive new Spotlight Voyages are inspired by the timeless allure of the Fabergé Maison, lifting the veil of untold stories throughout its legacy. Travelers will not only be immersed in the rich culture and heritage of the world’s foremost jewelry brand, but they will also enjoy the unrivaled Regent experience, which has been honed to perfection over 30 years.”

More details about both Fabergé Spotlight Voyages will be announced at a later date.