Where Are Crystal Cruises’ Ships Now?

Posted on December 6th, 2022 by Brittany Chrusciel in Departures 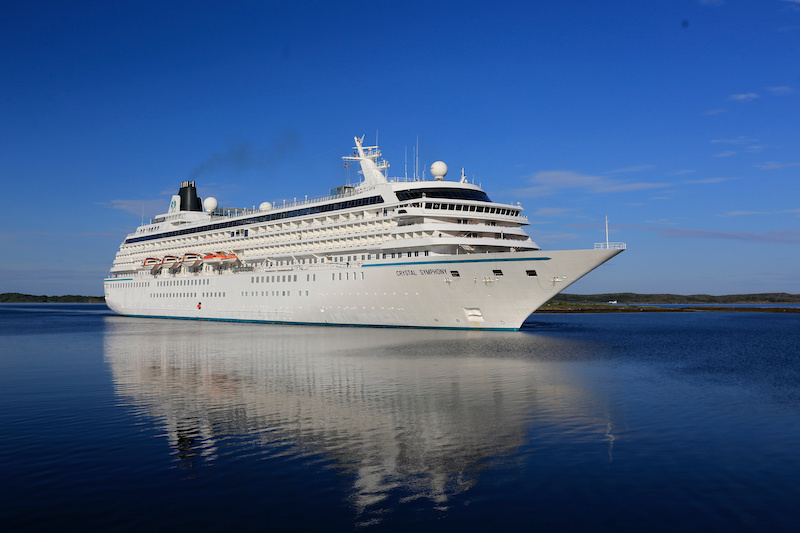 Just when it seemed that most major cruise lines had weathered the effects of the Covid-19 pandemic, the bankruptcy of Genting Group’s Crystal Cruises at the start of 2022 sent shockwaves across the industry.

Luckily for loyal Crystal guests and cruise industry supporters, the majority of Crystal Cruises’ nine luxury ships found other homes within a few short months. As the year draws toward a close, this list provides the latest standings of Crystal’s ocean, river, and yacht vessels.

Crystal’s two elegant yet hardworking ocean ships were both purchased by A&K Travel Group in June 2022 — along with the rights to the name Crystal Cruises. Both ships — the 848-passenger Crystal Symphony and the 980-passenger Crystal Serenity — are undergoing a major refit before their relaunch sometime in 2023. Jack Anderson will serve as president of the Crystal division, with 30 years of experience in leadership roles at Seabourn, Windstar, Holland America, and Carnival.

Manfredi Lefebvre d’Ovidio, co-chair of Abercrombie & Kent, also spent 20 years overseeing Silversea Cruises. “Selling the cruise business that belonged to my family for a quarter of a century was a difficult decision, as I knew I would miss this industry immensely. Therefore, when the opportunity arose to acquire Crystal Cruises, I did not think about it twice,” Lefebvre d’Ovidio said in a statement.

The former luxury cruise line’s newest ship prior to ending service was 200-passenger Crystal Endeavour — an expedition vessel that also aimed to pamper guests —launched in summer 2021. Silversea Cruises acquired the one-year-old ship in July 2022. Sailing as Silver Endeavour, the expedition ship officially joins the fleet this month, replacing Silver Explorer for its 2022-2023 season in Antarctica, including the line’s popular Antarctica Bridge sailings.

The smallest oceangoing ship in the Crystal fleet was sold to Lindblad Expeditions prior to the bankruptcy, in September 2021. The former 62-passenger ship has found new life as the National Geographic Islander II, an all-suite expedition vessel accommodating 48 guests on itineraries across the Galapagos. The ship officially began service for Lindblad in August 2022.

Crystal Cruises’ first river ship was retrofitted from an existing vessel, originally built in 1987, and introduced to the fleet in 2016. The double-wide Crystal Mozart now serves as the flagship for Riverside Cruises, a newly formed cruise line helmed by former AmaWaterways managing director, UK and Europe, Stuart Perl. The Riverside Mozart, which can accommodate up to 154 guests, will debut its new moniker beginning in April 2023 on a variety of European river cruises departing from either Vienna or Budapest and ranging from three to 11 nights.

The remainder of Crystal’s river fleet have yet to embark on the next chapter of their service. The 106-passenger sister ships, built between 2017 and 2018, are currently docked in The Netherlands.

Posted in Departures, Top Headlines | No Comments »
Tagged With:

US to relax some Trump-era sanctions on Cuba
The United States will ease some of the Trump-era restrictions on Cuba, the Biden Administration, in line with campaign promises, announced on Monday. The U.S. will allow some charter and commercial fights to airports other than Havana and reinstate educational travel but not yet the “people to people” program.
UnCruise Rolls out Destinations and Systems for 2022 and 2023
Alaska-based UnCruise has rolled out the list of itineraries its nine adventure ships will sail from now through spring 2023—and shared with TRO some of the behind-the-scenes changes being instituted to support them.
Scenic Offers Details of Eclipse II Maiden Voyage in 2023
The new Scenic Luxury Cruises & Tours discovery yacht, Scenic Eclipse II, will debut with an 11-day maiden voyage from Lisbon to Barcelona departing April 13, 2023.

Share your thoughts on “Where Are Crystal Cruises’ Ships Now?”