When it comes to river and coastal sailing in the United States, American Cruise Lines has been at the top of the game since 1991. Not only have they provided sophisticated cruising for travelers since then, but they have also continued to update their fleet with new ships ready to provide unique scenery on the Mississippi and the Columbia and Snake Rivers. And they’ve done it again, with anticipation for the first voyage of the American Symphony approaching in August.

As part of the modernization of their fleet, American Symphony has taken elements of the ships that cruise the European rivers and brought them to the shores of the United States… particularly the shores of the mighty Mississippi River. The ship carries 175 passengers. Similar to her sibling ship, American Melody, the interior has been updated in design and comfort.

END_OF_DOCUMENT_TOKEN_TO_BE_REPLACED 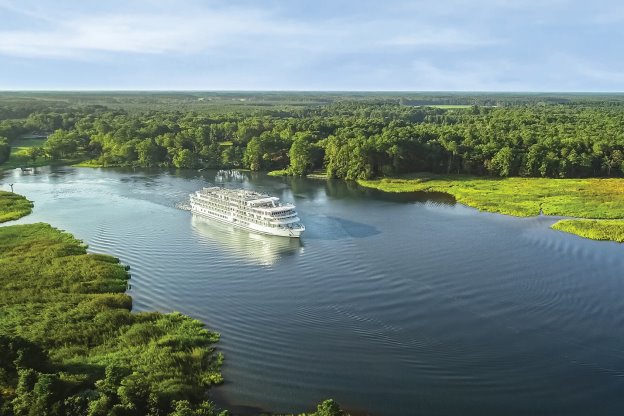 The newest riverboat for the Mississippi River passed sea trials late last week and is on its way to New Orleans for an on-time start to its inaugural season on the Mighty Mississippi. American Cruise Lines announced that it has accepted delivery of the American Symphony from Chesapeake Shipbuilding as scheduled. American Symphony is the 5th riverboat in the Line’s ground-breaking new series and the 15thsmall ship built by Chesapeake for American. The 175-passenger new boat will immediately join the company’s expanding Mississippi River fleet. American Symphony’s first cruise is set to depart on August 27th from New Orleans, and American Cruise Lines plans to christen the riverboat during its inaugural cruise on August 30th in Natchez, Mississippi.

“American Symphony is part of our ongoing commitment to leading the U.S. River Cruise market by introducing innovative small ships every year,” said Charles B. Robertson, President & CEO of American Cruise Lines. “Smaller is better on the rivers. We look forward to American Symphony’s first season on the Mississippi, as well as the introduction of sister ship American Serenade early next year.” END_OF_DOCUMENT_TOKEN_TO_BE_REPLACED