Posted on January 10th, 2011 by John Frenaye in Outposts

St. Lucia’s tourist slogan is Live The Legend. And it’s no wonder, as the island has 19,000 acres of rain forest, a steaming sulfur volcano, exotic wildlife, colorful foliage, and both black and white sand beaches. An experience on St. Lucia is bound to be a wonderful experience and are becoming more popular, as visitor are drawn to the natural beauty of the island and its undeveloped feel. 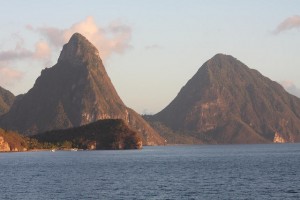 The island is only 27 miles long and 14 miles wide. To put it in perspective, it is smaller than  London or New York City. Yet there is a wealth of activities on the island: hiking through rain forests, mountain biking, bird-watching and more. Whale and dolphin watching are popular, as are fishing, scuba diving and snorkeling.

The people of St. Lucia are mixed and all are warm and inviting. As in most of the Windward Islands, St. Lucia was originally inhabited by the Arawak Indians, who were driven out by the Carib Indians before the arrival of Europeans. Claims to the first European settlement differ somewhat. Some maintain that Columbus sighted the island in December 1502; others believe that it was another Spanish expedition, a group of shipwrecked French sailors or Dutch explorers who first reached the island. The Carib warriors prevented any permanent settlement of the island until the mid-1600s, when French colonists established themselves there.

Like so many other Caribbean islands, St. Lucia became a political Ping-Pong ball, bouncing back and forth between France and England 14 times. As a result, both countries influenced the island’s culture. In 1814, France ceded it to England, and it remained an English colony until the 1970s. Nonetheless, French traditions remain. The local Roman Catholic Church is influential, and most residents speak Creole. English is the official language and most people speak English.

St. Lucia finally gained its independence from England in 1979 and is now a member of the British Commonwealth. The major industries are agriculture (bananas) and, of course, 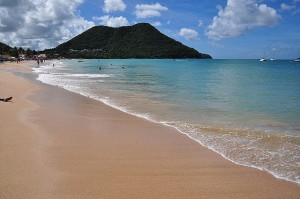 With all its natural beauty and hiking trails, St. Lucia is a great destination for the outdoor enthusiast who wants to visit a Caribbean island—especially if they prefer less-developed areas. But anyone who loves great beaches amid beautiful scenery and plenty of peace and quiet will be very happy. If you are looking for a robust nightlife, almost any other island will be more robust than peaceful St. Lucia. That is not to say that there isn’t any; it is just subdued, like the rest of the island.

There are some little known facts about St. Lucia. The island has been the site for a number of Hollywood movies, including the original Doctor Doolittle, Superman II, Water with Michael Caine and Firepower with Sophia Loren. Leatherback turtles, the largest on Earth, lay their eggs on Grand Anse beach on the northeast side of the island between March and July.

St. Lucia has had at least one conservation success: In the past two decades, the population of the native, endangered jacquot parrot has doubled, a rare victory against poachers and smugglers.