Posted on April 25th, 2011 by John Frenaye in Editorial Musings

This week, it seemed wherever I went; Twitter was a topic of discussion.  Everywhere I turned, the topic came up– at a City Council meeting, at a business conference, on my facebook page, on the news, and of course in the travel community at TRO (we are big on discussing social media there). Everyone had an opinion as to whether it was a good “thing” or a bad “thing.”  Rather than get into that, let me use my soapbox for a few moments and then open it to you in the comments!

One of the agents in the community was relaying the power of Twitter when a client of hers ended up tweeting that Hilton would not award loyalty points for a wholesaler booked trip to Hawaii. When all was said and done, the client got her points and the agent somewhat felt she had some egg on her face.

The real story here is not if the agent or the client was at fault; but how Hilton handled the issue.  Face it, points are worthless—they are not carried as an asset and can be zapped at any time with no recourse. But by tweeting the displeasure, her complaint was essentially sent to 15,000 of Hilton’s best customers (the followers) as well as Hilton. And you can be sure that they were looking to see how Hilton handled the issue. Did they ignore it? Or handle it? If you eat at a restaurant and have a bad meal and complain and the manager does nothing, do you return? You can be sure that many followers of Hilton were watching how it was handled. Followers of brands want to know that the company is responsive. In my opinion, this was very well played by Hilton. They made the customer happy for little to no cost; and more importantly, they reassured 15,000 followers that they selected the right hotel chain to follow.

I had the opportunity to address a large group of local business people last week and I was talking about the emergence of social media as a critical tool in the arsenal of every business. A typical question came up afterwards, “so who cares where you are going to lunch?” OK, when twitter first came on the scene, people did not know what to do with it. But if you have not taken the time to look into twitter today, you are missing a lot.

I explained, that 20 years ago, I got my news from the newspaper. 10 years ago, I was avant garde with a Yahoo home page that aggregated my news topics for me. 5 years ago, I was cutting edge with an iGoogle homepage and Google news alerts. But today, my daily news comes in 140 character messages on Twitter. I use HootSuite to manage my feeds and I have several search feeds that follow topics I select. I have one for travel news, one for world and national news, one for local news, and one for funny people that I enjoy following. In each search, I select the account I want to follow (CNN, MSNBC, TRO, Washington Post, New York Times, Peter Shankman, Breaking News, my competitors –she’s not a competitor, but I wanted to give her some Twitter love) and then I can simply read the headlines and follow the links if a particular story grabs my attention.  “Cruise lines to increase NCF fees to agents”—ignore, it’s old news & been happening for years. “Cruise lines to increase commission and pay commission on shore excursions”—now you have my attention and I am clicking the link. Pretty cool, huh?

Just this week, I read a post that included some startling facts about Twitter. Maybe they don’t surprise you, but they certainly piqued my interest.

Twitter is not about what you had for lunch or when you are headed to the rest room. Twitter has evolved and is now a primary source for news (the first reports of Flight 1549 came from Janis Krums and his famous picture on, you guessed it, Twitter), competitive information, and yes entertainment. Guilty pleasure: I follow Charlie Sheen for the train wreck and Paris Hilton because I have a crush—and she follows me back!

A Success Story In The Making

An agent I know (and she did not give me permission to tell her story, so I will generalize) wanted to create a Twitter buzz. She announced a weekly Twitter tweetup (twitter talk for online meet up) where people could tweet their questions. The first two weeks, I am pretty sure it was only her and a friend faking it. But last week, it drew about 4 interested tweeters and two cruise lines who ultimately added to the conversation. I suspect she did not have a relationship with the lines, but by tweeting about them, it got their attention and someone on the social media team stopped by to see what was going on and engage. Will she get any sales from it? Who knows? But more than likely she will be remembered by those four tweeters that joined her as the agent that held a tweetup and was joined by two cruise lines. Not bad PR if you ask me.

Twitter may be in its infancy right now, but if you are not embracing this tool right now, you owe it to your business to take another look and dip your toe into the pool. No need to dive in head first; sign up, observe for a week, then start to engage, and find out what works best for you.

Are you on Twitter? How do you use it? Do you find it valuable? Leave a comment! Want some tips and tricks, let me know; I am more than happy to share!

PS: While I was writing this, these tweets came in well before they hit traditional news. How valuable might this be to you if you have clients that are in St. Louis or Santa Ana? Are you interested now? 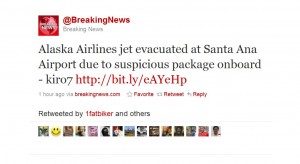 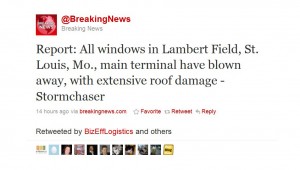 One thought on “Go on…be a twit”