Posted on May 30th, 2011 by John Frenaye in Editorial Musings

When I lived in Pennsylvania, the opening day of deer hunting season was a de facto State holiday. It did not matter if you were a hunter or not-nothing got done. My home town of Annapolis is no different when it comes to the US Naval Academy. Each May, 1000 or so young men and women graduate and receive their commissions in the US Navy or the US Marine Corps. And each May there are plenty of reasons to play hookie and accomplish little. And this past week was no exception; except I observed something at the Herndon Climb that might be able to help us all in our respective travel businesses. 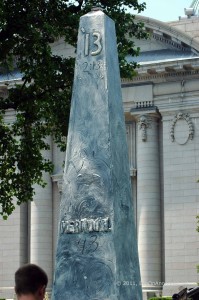 In a nutshell, the Herndon Climb is the end of the plebe (freshman) year. As a class, the plebes rush to a 21 foot tall granite obelisk and climb to the top. At the top is a plebe hat and the goal is to replace it with a midshipman’s hat. The glitch? The monument is covered in about 200 pounds of lard. The event is always a fun one to watch as class after class views to be the one that makes the climb in the shortest time.

After receiving the order, the midshipmen run at the monument tossing towels and shirts against it to wipe away the lard. Eventually they will build a human scaffold and one plebe will ascend to the top to make the switch. The lore surrounding the switch says that the plebe who makes the switch will be the first to make Admiral in the class. 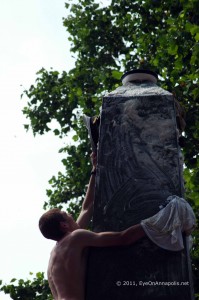 Initially, it seems to be every man for himself. Everyone wants to be the first to make it. But eventually, they realize that no man is an island and to accomplish this feat, they need to work together. Size, strength or gender ultimately give way to one cohesive team that selflessly pushes one man (no woman has done it yet) to the top. It is amazing to watch this group of 1000 individuals come together as a team toward a common goal. They somehow morph from being the fiercest competitor to loyal teammates.

So what does this have to do with travel? And what can we learn? Quite a bit actually. We are all individual competitors; yet as an industry, we need to act as a team of plebes reaching for the hat. Sure we can compete against one another for the individual sale; but in the end, our survival (as an agency or as an industry) is more reliant on us working together as a team and offering our individual strengths, weaknesses, and knowledge to help each other excel.

The industry does not lack opportunities for you to offer to help. The TRO Community is a fine example. There are plenty of other online resources as well and all have their unique idiosyncrasies. But a common thread I notice is that very few people will regularly engage and offer to help. There are plenty of people who will look for an answer or a tip. And there are even more who will just sit there and soak it all in. But at that point, we are a dysfunctional plebe class trying to climb the monument with very few people.

Join the team. Ask your questions, but more importantly, jump in and help your teammates reach the top.

One thought on “Teamwork”